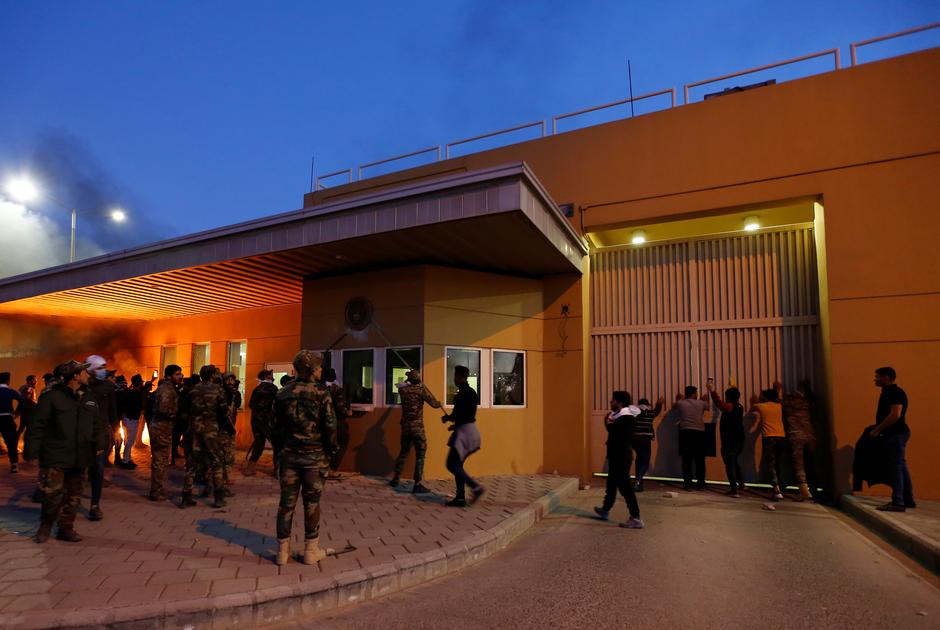 BAGHDAD: The United States said on Tuesday (Dec 31) it is sending hundreds more troops to the Middle East after a mob of pro-Iranian demonstrators stormed its embassy compound in Iraq, setting fires and chanting “Death to America!”

Angered by US air strikes that killed two dozen paramilitary fighters on Sunday, hundreds of protesters spilled through checkpoints in the high-security Green Zone Tuesday, demanding the ouster of American troops from Iraq and voicing loyalty to a powerful Iranian general, Qasem Soleimani of the Revolutionary Guard Corps.

US Secretary of State Mike Pompeo said the attack was “orchestrated by terrorists,” one of whom he named as Abu Mahdi al-Muhandis.

Muhandis has been identified as second-in-command of the Tehran-backed Hashed al-Shaabi paramilitary group which includes Kataeb Hezbollah, the group that was targeted in the US air strikes.

Defense Secretary Mark Esper said in a statement that around 750 troops from a rapid response unit of the 82nd Airborne Division are prepared to deploy over the next several days to the region.

“This deployment is an appropriate and precautionary action taken in response to increased threat levels against US personnel and facilities, such as we witnessed in Baghdad today,” he said.

The US had already flown a rapid response team of Marines into Baghdad to reinforce its embassy after the attack Tuesday, which left smoke and flames rising from the embassy entrance and further heightened tension between Tehran and Washington.

Esper’s announcement is the latest move by Washington to step up its defenses in the region since US President Donald Trump in May 2018 pulled out of a multinational nuclear deal with Iran and re-imposed crippling economic sanctions.

Trump blamed Tehran for the embassy attack and warned that it would face punishment if Americans are killed.

“Iran will be held fully responsible for lives lost, or damage incurred, at any of our facilities,” Trump said on Twitter.

“They will pay a very BIG PRICE! This is not a Warning, it is a Threat,” wrote Trump, adding “Happy New Year!”

Just prior to Esper’s announcement a US official had told AFP that Washington had already deployed hundreds of American troops to Kuwait in response to the unrest, and they would likely to be sent on to Iraq.

“At least 500 members of the US Army’s 82nd Airborne Division have left Fort Bragg in the US, and up to 4,000 may ultimately be deployed,” the official said.

Trump’s message came at the end of a day in which Washington officials appeared surprised and furious over the ease at which the protestors entered the Green Zone, reaching the US embassy compound for the first time in years.

They carried flags of the hardline Kataeb Hezbollah (Hezbollah Brigades), a component of the Hashed al-Shaabi paramilitary network.

Live broadcasts showed the protesters battering down the high-security doors of the embassy reception building, smashing windows and burning a sentry box.

The State Department and Pentagon demanded Iraq’s leaders provide security to the compound — which was already heavily fortified.

By the time a contingent of US Marine reinforcements flew in, some of the demonstrators had receded and others settled in for a sustained protest, preparing food for the evening.

Tehran said the United States is itself to blame for air strikes that killed about two dozen Kataeb Hezbollah fighters on Sunday.

“The surprising audacity of American officials is so much that after killing at least 25… and violating the country’s sovereignty and territorial integrity, that now… they attribute the Iraqi people’s protest against their cruel acts to the Islamic Republic of Iran,” said foreign ministry spokesman Abbas Mousavi.

The mob attack put a focus on the strains in the US-Iraqi relationship. Allies of Iran, which enjoys significant support in parts of the Iraqi government, increasingly challenge Washington’s influence in the country.

US jet fighters on Sunday struck five Kateab Hezbollah outposts in Iraq and Syria after a series of rocket attacks on US-occupied facilities in Iraq over the past two months that are blamed on the group and its alleged Iranian sponsors.

One of those attacks, in Kirkuk on Friday, left an American civilian contractor dead and exhausted what US officials called Trump’s “strategic patience” with Tehran.

‘FIRST LESSON’ TO US

It also added to the growing calls by some political factions in Iraq to push US troops out of the country nearly 17 years after they entered and overthrew Saddam Hussein’s regime.

The protesters who besieged the US embassy on Tuesday carried posters reading: “Parliament should oust US troops, or else we will!”

Late Tuesday Kataeb Hezbollah hailed the attack as a “first lesson” to Washington, “so that Trump knows he did something extremely stupid”.

US officials said there were no plans to evacuate the mission, and no US personnel were reported injured. Ambassador Matthew Tueller, who had been on holiday leave, was on his way back to the embassy.