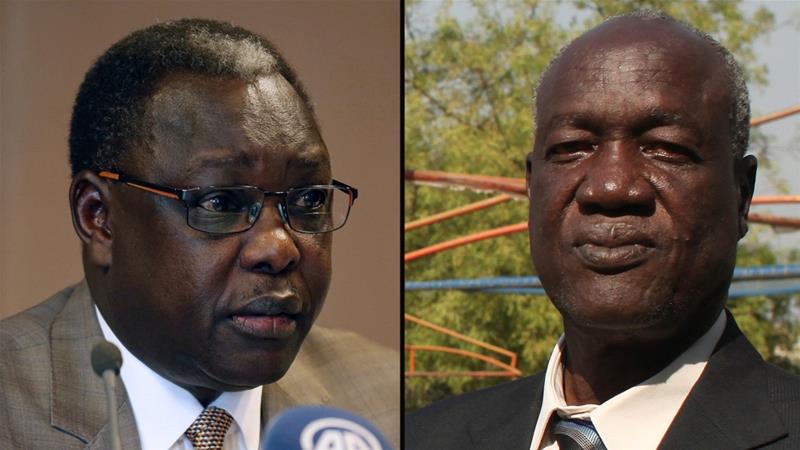 The United States government has imposed sanctions on two senior South Sudanese officials, accusing them of fomenting conflict in the country.

Minister of Cabinet Affairs Martin Elia Lomuro and Minister of Defence and Veteran Affairs Kuol Manyang Juuk were blacklisted for their role in perpetuating South Sudan‘s years-long conflict by obstructing the country’s stalled peace process, the US Department of the Treasury said on Monday.

“We are designating two cabinet-ranking officials in the South Sudanese government for their role in inhibiting political unification, expanding the conflict and profiting from South Sudan’s war economy,” Deputy Treasury Secretary Justin Muzinich said in prepared remarks for a speech to NGOs and financial institutions.

Muzinich announced the action at the Partnership to Combat Human Rights Abuse and Corruption, where he said NGOs had provided documented findings that helped support Monday’s designations.

The Treasury accused Lomuro of recruiting and organising local militias to attack opposition forces in South Sudan, which descended into a ruinous civil war in 2013, two years after gaining independence from Sudan.

Juuk was accused of failing to remove forces from the battlefield as agreed, stirring up violence with rival tribes and preparing militias for the possibility of renewed violence.

The sanctions freeze any US assets held by the officials and prohibit US citizens from doing business with them.

The latest sanctions come as Washington is re-evaluating its relationship with Juba after South Sudanese President Salva Kiir and rebel leader Riek Machar agreed in November to give themselves more time to form a power-sharing unity government.

The two rivals signed a peace deal in September 2018 to form the government by November 12, under pressure from the United Nations, the US and regional governments.

Days before the deadline, the two leaders agreed to a 100-day extension.

More than 30 days into that period, Washington is yet to see Juba take the necessary steps to “create the political and security conditions conducive to formation of a unity government and adequate implementation of the peace deal,” the Treasury said in the statement.

Al Jazeera’s Hiba Morgan, reporting from Khartoum, the capital of neighbouring Sudan, said the relationship between Washington and Juba was becoming increasingly rocky.

“This latest sanctions come six days after the US put sanctions on five other South Sudanese officials accusing them of human rights violations,” Morgan said.

“Washington made it very clear after the South Sudan government and the opposition leader agreed to postpone the formation of a transitional government that it was not impressed with that decision,” she added.

“Meanwhile, a few days ago, South Sudan’s minister of information said the US sanctions were derailing the peace process,” Morgan said.

The war has killed an estimated 400,000 people and forced millions from their homes.