“I was really impressed by the instructor team working with the Ugandan forces to learn how they might treat casualties and provide security while responding to an incident,” said U.S. Army Maj. Novneet Sahu, Task Force Warrior surgeon assigned to Combined Joint Task Force – Horn of Africa, and lead instructor for the exchange. “Should we ever end up in a situation together where people are injured, we know we can work together on the same level to take care of our soldiers.”

Sahu credited the 411th Civil Affairs Battalion, also with CJTF-HOA, with paving the way for key leaders to engage, teach and train each other. 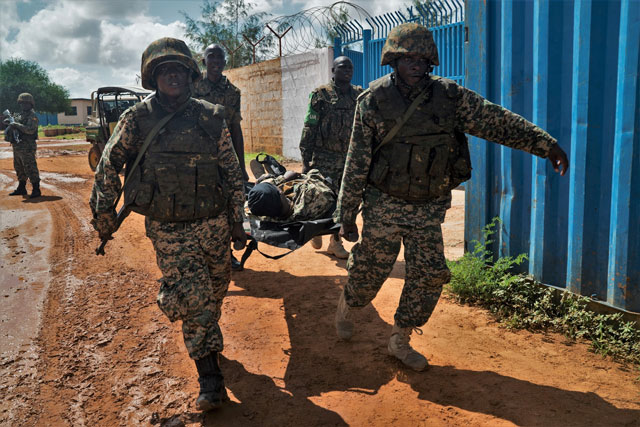 Paddock said the team was fortunate to have good working relations with AMISOM and Uganda People’s Defense Force Civil Military Coordinator, Ugandan Maj. Steven Byaruhanga, who developed a strong rapport with Civil Affairs during their time in Somalia.

“This was a good initiative by our American partners to train our soldiers to intervene and help our doctors if a problem comes up,” said Byaruhanga. “If we can continue working together then we should. Our soldiers were very happy and asking for more courses.”

Byaruhanga said that without the help of Civil Affairs, the UPDF in the region may not have opportunities to train and prepare for potential attacks.

“Instilling TCCC, reacting to an IED, small unit tactics and battle drills are huge to keep going forward,” said U.S. Army Capt. Kurt Jamora, a 411th Civil Affairs Battalion team chief overseeing civil engagement operations in the region. “As long as we impart that knowledge on the UPDF, who can impart it onto the Somalis, we’ll be successful.”