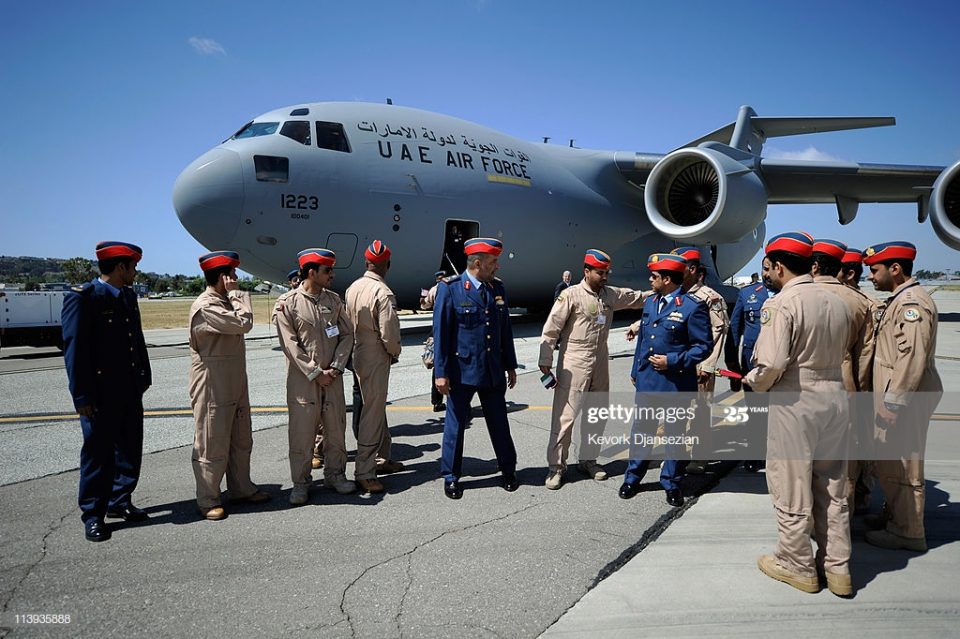 LONG BEACH, CA – MAY 10: Major General Mohammed Bin Swaidan Saeed Al Gamzi (C) of the United Arab Emirates Air Force and Air Defence speaks with pilots after a handing off ceremony of the first of six C-17 Globemaster III airlifters at the Boeing final assembly facility at Long Beach Airport on May 10, 2011 in Long Beach, California. The UAE will take delivery of three more C-17s this year and two in 2012 as it modernizes its airlift capabilities. (Photo by Kevork Djansezian/Getty Images)
May 19, 2020 at 2:42 pm |

A private jet belonging to an Emirati royal has brought a group of Israeli nationals who were stranded in Morocco for over two months home.

The 26 Israelis, who were part of an original group of 36, returned to Israel after a “philanthropic” operation flew them back from the French capital Paris, having flown there the day before from Casablanca’s Mohammed V Airport. The remaining ten are believed to have died as a result of coronavirus.

According to the Jerusalem Post, the repatriation operation was a result of secretive negotiations between the Israeli and Moroccan governments over a month. Morocco’s prohibition of direct flights between the countries are said to have stalled the talks.

A previous failed attempt occurred in April reported Morocco World News after the UAE and Israel scheduled a joint flight of stranded Israeli and Emirati tourists but failed to disclose all the flight’s details to Moroccan authorities.

The New Arab revealed yesterday that the VIP plane involved in the operation belonged to a member of the Emirati royal family. Reporting that a video of the repatriation has circulated on social media showing the Israelis on-board “a lavish jet complete with pristine white leather sofas, a private meeting room, and even a gold enamel sink”.

The claim, originally made by Israel’s Channel 12 contradicts earlier reports that the Israelis were repatriated by an American-Israeli philanthropist couple. The allegations would be further evidence of normalisation between Israel and Gulf states.