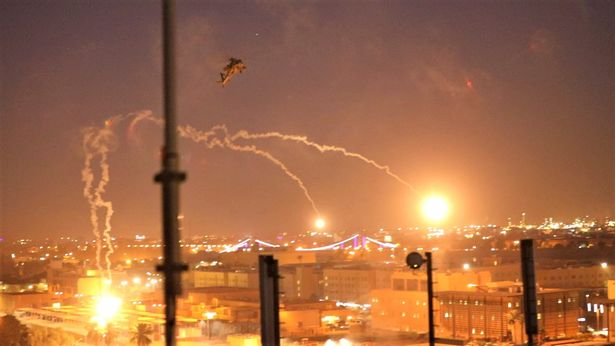 Iraq: Rockets fired near US embassy in Baghdad say police

Two rockets were fired at the US embassy in Baghdad as mortar rounds blasted a nearby air base – sparking fears that WW3 is breaking out.

Three civilians were wounded after the missiles fell on the outskirts of the compound, before a double mortar attack injured three Iraqi soldiers at Balad Air Base – home to hundreds of US service personnel.

Nobody has claimed responsibility for the attacks – but they come just one day after top Iranian General Qassim Soleimani was killed in the drone strike overnight at Baghdad airport.

The flag is seen as warning that the country is ready to fulfil its pledge to hit back at America and President Trump.

The flag is being flown above the Jamkaran Mosque which lies on the outskirts of the holy city of Qom, around 100 miles south of the Iranian capital, Tehran.

It flew at full mast as General Qasem Soleimani’s daughter pleaded with the Iranian president to strike back after her dad was assassinated in a shocking move.

During Hassan Rouhani’s visit to the family home in Tehran, she is believed to have said: “Who is going to avenge my father’s blood?”

Earlier today an Iranian military leader had claimed they had located several US interests for the attack, including “destroyers and warships” close to the Persian Gulf.

General Gholamli Abuhamzeh, warned of a potential attack on “vital American targets” located in the Strait of Hormuz, in retaliation for the death of Soleimani.

Abuhamzeh is believed to have said: “Vital American targets in the region have been identified by Iran since long time ago…

“Some 35 targets in the region, as well as Tel Aviv, are within our reach.”

Tens of thousands of mourners are believed to have mobbed a funeral procession for the General and other militia who are killed in the US airstrike, which has since been branded “an act of war” by Tehran.

In a chilling interview with CNN, Iran’s UN envoy Majid Takht Ravanchi, said the assassination was “tantamount to opening a war against Iran.”

Soleimani, 62, was blown up amid claims he had plotted attacks against American citizens.

He had led the overseas arm of Iran’s Revolutionary Guards and was believed to be the second most powerful figure in the country, after Supreme Leader Ayatollah Ali Khamenei.

Qasem had landed at Baghdad Airport after travelling from either Syria or Lebanon around 12:30 am and was met by Abu Mahdi al-Muhandis, deputy commander of the pro-Iran Popular Mobilisation forces in Iraq.

When the cars were passing through a cargo area for an access road leading out of the airport, the vehicles were struck by at least two missiles by a remote-controlled US MQ9 Reaper drone.

It comes after Royal Navy hero Admiral West told Daily Star Online it is “highly likely” there will be a response by Iran.

And he warned the US the only way to launch a successful full-scale war with Iran it would be an operation comparable to the invasion of Germany at the end of World War 2.

In a message to war hawks in Washington pushing for conflict, he said simply: “Be careful what you wish for.”

S. Sudan to build harbour in Djibouti as onslaught on Mombasa port continues