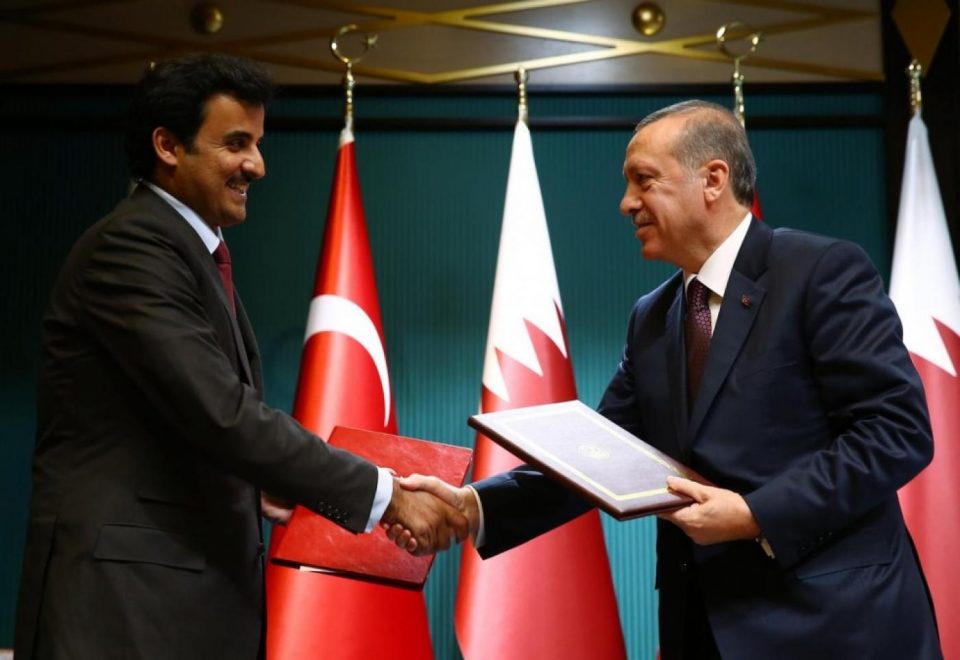 Turkish President Recep Tayyip Erdogan’s dreams of leadership in the Muslim world may be fading, but they are still kept alive by Turkey’s ties with Qatar, which Ankara has shielded in the inter-Arab crisis in the Gulf since 2017. During Erdogan’s visit to Doha last week, the two sides signed seven cooperation accords — a welcome reminder that foreign ties should be driven by mutual interest and not threats and blackmail, which Erdogan has increasingly been using in recent times. Yet how the deals contribute to Turkey’s economic and strategic interests remains open to question, despite celebratory headlines in the pro-government media.

The accords — signed Nov. 25 in the presence of Erdogan and Qatari Emir Sheikh Tamim bin Hamad Al Thani during the fifth meeting of the bilateral Higher Strategic Committee —- aim to boost cooperation in the fields of commerce, finance, investment, technology and urban affairs. The most significant deal is an update of last year’s currency swap agreement between the Turkish and Qatari central banks, which, according to officials, aims to “facilitate bilateral trade in respective local currencies and support the financial stability of the two countries.” Under the deal, the overall swap limit was raised to the $5 billion equivalent in the Turkish lira and Qatari riyal from $3 billion in the original version.

Going through dire straits both at home and abroad, Erdogan is eager to show he still has friends. And what does this show mean for Qatar? The fresh agreements with Turkey came amid signs of fence-mending between Doha and its “punishers,” led by Saudi Arabia and the United Arab Emirates (UAE), a process that makes Turkey all the more unwanted in the Gulf. Cutting military ties with Turkey is one of the conditions that the Saudis and the Emiratis put forward to Qatar in 2017, atop earlier demands such as ending support for the Muslim Brotherhood. Hence, Qatar’s extension of its honeymoon with Turkey could snag its attempts at normalization with its Arab neighbors. Shortly before Erdogan’s visit, a decision by Saudi Arabia, the UAE and Bahrain to send their national teams to a soccer tournament in Qatar had raised hope that the Gulf crisis could be drawing to a close.

Qatar defended Turkey’s military operation in northern Syria in October, breaking ranks with the critical attitude of the Arab League. Yet Doha has pursued its own agenda in the energy competition in the eastern Mediterranean, including Cyprus, teaming up with Turkey’s rivals. After all, Qatar is not as big as to engage in an “axis” row to an extent that suits Erdogan. Hence, he has turned a blind eye to Qatari collaboration with the Greek Cypriots in gas exploration in the eastern Mediterranean.

Turkish annoyance with Qatari foreign policy dissonance has occasionally manifested itself in the media. Most recently, TRT World, one of the channels of Turkey’s state broadcaster, accused Al Jazeera English of hostile coverage of Turkey’s Operation Peace Spring in Syria, while highlighting the growing number of deaths among foreign workers in Qatar. The newspaper Daily Sabah, for its part, denounced Al Jazeera English as “a threat against the Turkey-Qatar alliance” and urged the channel “to weed out all individuals seeking to poison that alliance behind the smokescreen of independent journalism.”

The Qatari emir, however, cannot risk to forgo his friendship with Erdogan until he feels more secure vis-a-vis his neighbors. “The Qatari-Turkish partnership is progressing toward its goals successfully,” the emir tweeted the day he welcomed Erdogan in Doha.

The unison problem on foreign policy issues aside, the latest accords appear to be of doubtful significance for Turkey’s foreign trade and strategic interests. Some Turkish media may have called them “giant” agreements, but one struggles to see what economic gains they promise.

Despite all the fanfare about partnership with Qatar, bilateral trade reached no more than $1.4 billion in 2018. The breakdown shows that Turkish exports to the emirate rose to $1.1 billion from $650 million in 2017, while Qatari exports to Turkey totaled $335 million, up from $264 million the previous year. Despite the increase, Qatar still ranks 39th among the largest buyers of Turkish goods. Turkish expectations, however, have been rather ambitious. The Turkish construction sector, whose projects to date in Qatar total $17 billion, has eyed a larger share from the emirate’s $200 billion construction drive for the 2022 FIFA World Cup soccer tournament as well as from a comprehensive development program, called Qatar National Vision 2030.

Also, Erdogan has repeatedly called on Qataris to invest in Turkey. In August 2018, Qatar pledged to invest $15 billion in Turkey after a severe currency crisis hit. Government sources claim the investments have reached $22 billion, but the figures remain contested. The actual amount is said to be well below $15 billion, as the $22 billion figure could be reached only by factoring in earlier investments. While backing Qatar has poisoned Turkey’s ties with other countries, Qatari investments in Russia have hit $13 billion, although the two countries have come to loggerheads in Syria.

Experts doubt the merits of the swap deal as well. According to well-known Turkish economist Ugur Gurses, the deal is a “cosmetic affair” to make the central bank’s foreign reserves look bigger. Of note, bilateral trade is well below the $3 billion swap volume and is not expected to rise further, as it did last year.

Nostalgia for past glories has been a predominant trait of bilateral ties. The garrison outside Doha, where 3,000 Turkish soldiers have been stationed since 2017, is named after Tariq bin Ziyad, the warrior who led the Muslim conquest of Spain in the eighth century. A new base nearby was named after Khalid ibn al-Walid, another warrior credited with major victories in the Islamic expansion in the first half of the seventh century, who is known also as Sayfullah or “Sword of Allah.” Visiting the facilities while in Doha, Erdogan said, “Those who demand the closure of this base have yet to realize that our country is a foul-weather friend of Qatar. Never in our history have we abandoned our friends in the face of threats and we will never do.”

The commander of the Turkish troops in Qatar had stirred passions in the Gulf media earlier as he borrowed the following quote from bin Ziyad in remarks to a journalist: “Behind you is the sea, before you the enemy. There is no turning back anymore.” In response, Abdulrahman al-Rashed, a Saudi columnist for Asharq Al-Awsat, wrote, “Clearly, the enemy here is Saudi Arabia and the Gulf states. … Qatar is threatening its neighbors with the Turkish base [but] the Turkish base cannot protect Qatar, neither from Saudi Arabia nor Iran.”

At any rate, Qatar’s yields have been limited for Turkey, which has placed the emirate in a lofty but exaggerated strategic context. Meanwhile, Turkey has lost ground in the rest of the Arab world owing to confrontational policies. One cannot help but recall a Turkish saying about getting little in return for the effort involved: Is the stone that Erdogan is throwing worth the frog it scares?

Fehim Tastekin is a Turkish journalist and a columnist for Turkey Pulse who previously wrote for Radikal and Hurriyet. He has also been the host of the weekly program “SINIRSIZ,” on IMC TV. As an analyst, Tastekin specializes in Turkish foreign policy and Caucasus, Middle East and EU affairs. He is the author of “Suriye: Yikil Git, Diren Kal,” “Rojava: Kurtlerin Zamani” and “Karanlık Coktugunde – ISID.” Tastekin is founding editor of the Agency Caucasus. On Twitter: @fehimtastekin

Deteriorating drought conditions threatens to displace over a million people