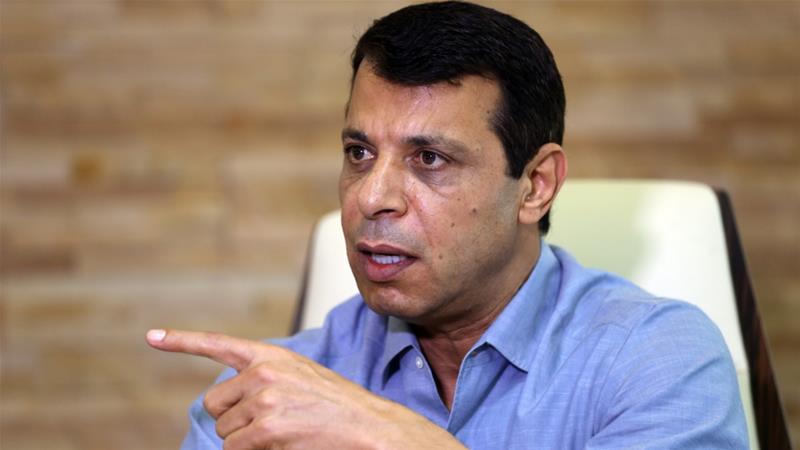 Turkey has offered four million lira ($700,000) for information leading to the arrest of Mohammed Dahlan, a former official in the Palestinian Fatah party who lives in exile in the United Arab Emirates (UAE).

Ankara accuses the 58-year-old of being a mercenary for the UAE and involved in a 2016 coup attempt against Turkish President Recep Tayyip Erdogan.

Interior Minister Suleyman Soylu on Friday told the Hurriyet newspaper that Dahlan was placed on the “most-wanted terrorists list”, linking him to what Ankara calls the Gulenist Terror Group (FETO) and US-based Turkish businessman Fethullah Gulen.

Ankara blames Gulen and his FETO movement for the coup attempt on July 15, 2016. Gulen denies involvement.

Turkish newspaper the Daily Sabah reported on Friday that Dahlan was accused of transferring funds to FETO.

Dahlan was expelled from Fatah’s ruling body in 2011 on allegations of plotting to overthrow his former ally in Fatah, Palestinian Authority President Mahmoud Abbas, and has been living in exile in the UAE since 2012.

In 2016, a Palestinian court sentenced Dahlan in absentia to three years in prison for corruption and ordered him to repay $16m, according to his lawyers.

He was head of internal security in Gaza, but fell from favour after his forces were overpowered by Hamas in 2007.

Turkish media regularly accuse Dahlan of involvement in the coup bid, and recently of playing a role in last year’s murder of Saudi journalist Jamal Khashoggi at Saudi Arabia’s consulate in Istanbul.

In an interview with Al Jazeera last month, Turkish Foreign Minister Mevlut Cavusoglu accused the UAE of harbouring “a terrorist”: “[Dahlan] fled to you because he is an agent of Israel”.

Cavusoglu further charged the UAE, which has tense relations with Turkey, with trying to replace Abbas with Dahlan.

Dahlan responded vehemently in an interview with a Saudi broadcaster, accusing Erdogan of supporting “terrorist groups” in Syria, stealing gold from the Libyan central bank and “acting as if he were commander of the faithful”.