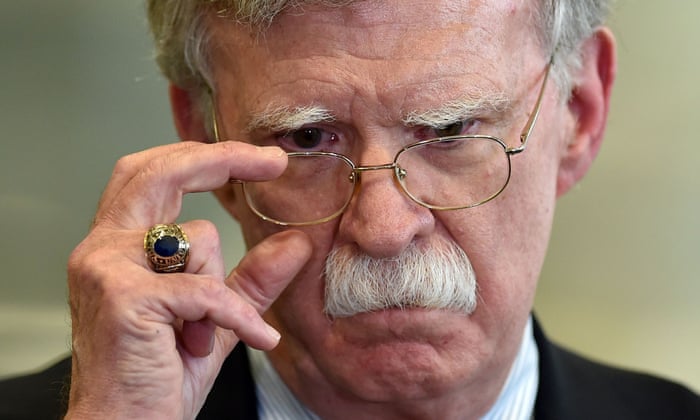 The former US national security adviser, John Bolton, was reportedly so alarmed at a back-channel effort to pressure Ukraine to investigate Donald Trump’s political rivals that he told a senior aide to report it to White House lawyers.

The revelation of Bolton’s involvement in the effort to block a shadow foreign policy aimed at Trump’s political benefit emerged from congressional testimony given by his former aide, Fiona Hill, the former top Russia expert in the White House.

Hill, the British-born former senior director for Europe and Russia on the National Security Council, spoke to three House committees for 10 hours.

According to the New York Times and the Wall Street Journal, Hill described a sharp exchange on 10 July between Bolton and the US ambassador to the European Union, Gordon Sondland, about the role played by Trump’s lawyer, Rudy Giuliani, to persuade the Ukrainian government to open investigations into Democrats, including former vice president Joe Biden.

Hill said Bolton instructed her to tell the National Security Council’s attorney that Giuliani was acting in concert with White House chief of staff, Mick Mulvaney, in a rogue operation with legal implications.

“I am not part of whatever drug deal Rudy and Mulvaney are cooking up,” Bolton instructed Hill to tell the NSC lawyer, according to her testimony.

She said that Bolton had told her on an earlier occasion: “Giuliani’s a hand grenade who’s going to blow everybody up.”

Hill also testified on Monday morning before three congressional committees about Trump’s decision, taken despite strenuous objections from aides including herself, to recall the US ambassador to Ukraine, Marie Yovanovitch.

The Washington Post reported that she had confronted Sondland over the Giuliani’s activities, which were not coordinated with officials charged with carrying out US foreign policy. Sondland is due to give his version of events on Thursday.

According to Fox News, Hill told congressional investigators that she and other officials went to the national security council lawyer with their concerns that the White House was seeking to prompt Ukraine to open investigations into Trump’s rivals.

Hill’s lawyer had earlier rejected arguments from the president’s attorneys that her testimony on Ukraine was covered by executive privilege.

In a letter to the White House, the lawyer, Lee Wolosky, said much of the material was already in the public domain and that “deliberative process privilege “disappears altogether when there is any reason to believe government misconduct occurred.”

The week could deteriorate rapidly for Trump, whose effort to rally defenders in his own party has been damaged by concerns about a growing disaster in northern Syria, following Trump’s abrupt pullback there, and a sense that major secrets attached to the Ukraine scandal are yet to come out.

Sondland’s testimony on Thursday comes after a previous attempt by the hotelier-turned-diplomat to testify was blocked by the state department, as part of a blanket White House defiance of the impeachment inquiry.

Congress is also due this week to receive relevant documents from an array of the most powerful figures in the administration, including the vice-president, the defense secretary and the White House chief of staff.

Out of the flow of new information, congressional investigators hope to fill in the picture of the Trump administration’s dealings in Ukraine, and answer the question of whether Trump’s conduct rises to the “high crimes and misdemeanors” cited in the constitution as grounds for impeachment.

The impeachment inquiry was sparked by a whistleblower complaint filed in August that in part described a 25 July phone call between Trump and the Ukrainian president, Volodymyr Zelenskiy, in which Trump requested the “favor” of an investigation into a potential 2020 rival, Joe Biden.

Trump and Republicans have repeated unproven allegations of corruption against Hunter Biden, the former vice-president’s son who was on the board of a gas company in the eastern European country while his father was involved in international efforts to curb corruption in its government.

The stark nature of Trump’s request to Zelenskiy has boosted support for Trump’s impeachment, according to polling averages.

The administration has struggled to find a message to rebut the perception of its own corruption, with the president, at times seemingly alone in his own defense, lashing out on Twitter against Democrats, the whistleblower, the media, Biden and more.

A good deal of Hill’s testimony focused on Yovanovitch, a widely respected diplomat who worked under six presidents and who defied the state department gag order to testify herself last Friday.

Yovanovitch said she had been the target of a smear campaign inside the administration fueled by Giuliani.

“I do not know Mr Giuliani’s motives for attacking me,” Yovanovitch said in an opening statement released to the press. “But individuals who have been named in the press as contacts of Mr Giuliani may well have believed that their personal financial ambitions were stymied by our anti-corruption policy in Ukraine.”

Two Giuliani business associates from the former Soviet Union, Lev Parnas and Igor Fruman, were arrested at a Washington DC-area airport last week on suspected campaign finance violations regarding a large check they wrote to a political committee supporting Trump and donations to at least one Republican congressman, Pete Sessions of Texas.

On Monday, Giuliani told Reuters he was paid $500,000 for work he did for a company co-founded by Parnas. Giuliani said he was hired to consult and provide legal advice to company Fraud Guarantee’s technologies.

After a May 2018 meeting between Parnas and Sessions, Sessions sent a letter to the secretary of state, Mike Pompeo, urging Yovanovitch’s dismissal because she had “spoken privately and repeatedly about her disdain for the current administration’”.

Yovanovitch denied the charge but she was dismissed nevertheless, in a move potentially driven by Ukrainians elements she was ostensibly charged with confronting and helping to dismantle.

(article first appeared in the Guardian)