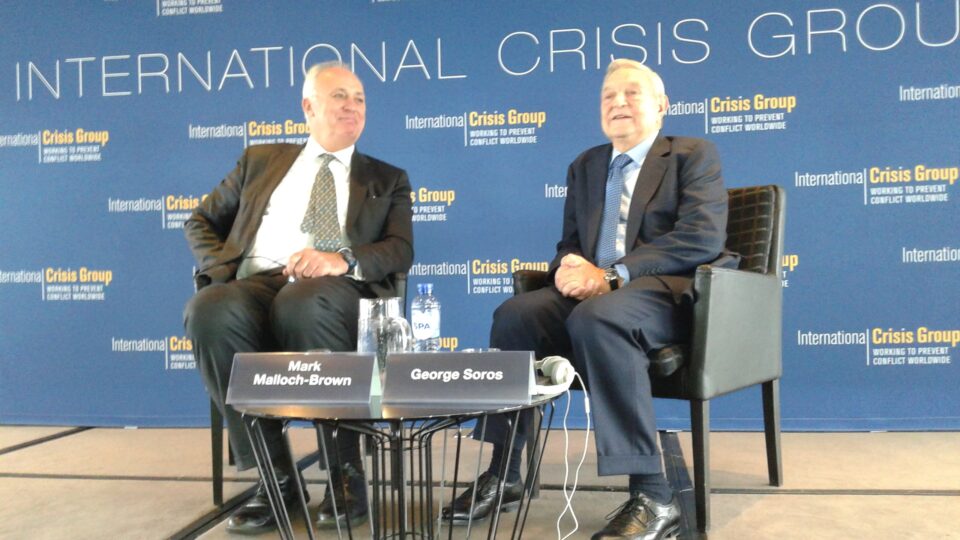 Conservatives in America demonize George Soros for funding the Democratic Party and U.S.-imperialistic (or “neo-conservative”) international organizations, but he’s actually just a part of a network of around a thousand or so global aristocrats or billionaires who do this.

Furthermore, within the individual U.S.-and-allied nations, the billionaires who fund all of the domestic political parties do the same thing in their own way; and, in the United States, a different billionaire, the conservative Charles Koch, is a mega-donor to Republican politicians and is demonized by Democratic Party voters much like Soros is demonized by America’s Republican Party voters.

In fact, both Soros and Koch share similar views, deep down; and, so, a naive liberal commentator, Stephen Kinzer, headlined in the Boston Globe on 30 June 2019, “In an astonishing turn, George Soros and Charles Koch team up to end US ‘forever war’ policy”, and he announced the formation by those two billionaires of the “Quincy Institute for Responsible Statecraft,” an allegedly (but only fake) anti-neoconservative and pro-peace think tank.

But that’s only theater, just more propaganda for the billionaires who are actually in control of U.S.-and-allied nations and ultimately responsible for America’s invasions and coups and attempted coups to conquer Iraq, Syria, Libya, Ukraine, Russia, China, etc.

Neil Clark said, in the 2 June 2003 New Statesman, that “The Soros strategy for extending Pax Americana [actually: “Permanent War for Perpetual ‘Peace’”] differs from the Bush model, particularly in its subtlety.

But it is just as ambitious and just as deadly.

Left-liberals, admiring his support for some of their favourite issues such as gay rights and the legalisation of soft drugs, let him off lightly.” (They share in his guilt, but do so out of their ignorance that the system itself  is as evil as it actually is.

Maybe they simply do not care about this bigger picture.

But if that’s so, they are merely wallowing, not swimming, and therefore won’t make any real progress; their concern for progress is then only a pretense.)

An example will be provided here to show how these operations function.

On 18 October 2013, Sibel Edmonds headlined at her “Newsbud” site, “BFP Exposé: CIA-Obama-George Soros Coordinated Misinformation Campaign Targets Russia” and described and documented the association between George Soros and liberal U.S. media such as “Democracy Now!” and the Washington Post. She also mentioned there the International Crisis Group, which those and other U.S.-and-allied ‘news’-media frequently interview in order to provide ‘expertise’ to deceive their audiences to favor “regime-change” in nations that the billionaires want to add to their existing empire.

Also, an anonymous commentator, at Oil Empire dot com, headlines “Who is George Soros? The velvet glove around the fist of empire”, and he provides more than a decade of documentation that Soros has significantly funded numerous pro-U.S.-imperialistic organizations.

One of the articles he shows there alleges that the International Crisis Group is among those organizations, but documentation for this claim is unfortunately not provided. Documentation for it will be provided here.

The International Crisis Group is as mainstream as they come in U.S.-and-allied propaganda-operations; and, so, here is the main funding for it in two recent years, as reported in 2019 & 2020:

“Schedule of Contributions and Grants Received, for the Year Ended June 30, 2019”

Foundations [final figure given is USD]

The Netherlands (Ministry of Foreign Affairs)

BOARD OF TRUSTEES OF THE CORPORATE COUNCIL OF THE INTERNATIONAL CRISIS GROUP:

Basically, the big billionaires, who control the largest international corporations (some financial, some not), bring together small billionaires and all of the lobbyists and ‘non-profits’ that they likewise control, and none of them operate solo.

Together — such as in the International Crisis Group, Human Rights Watch, Amnesty International, IMF, World Bank, Transparency International, and other authoritative institutions for deceit — they do their dirty work and dupe the public (both liberal and conservative) to hate whomever it is that the U.S.-and-allied billionaires want to overthrow and replace (such as Saddam, Assad, Gaddafi, Yanukovych, Maduro, Putin, and Xi).

Anyone who portrays this or that billionaire as being behind it all is correct, as far as it goes — clearly, none of them opposes U.S. imperialism — but misses the basic reality, which is that 100% of billionaires are imperialists, and together they possess the power of their enormous excessive wealth to hire-out their dirty-work, and to advertise it as being, instead, good or even heroic.

As long as there will be billionaires, there will be international sanctions, blockades, subversions, coups, military invasions, and military occupations, all promoted by their ‘news’-media and being government-funded by the public, and being financed via the public’s tax-payments, but benefitting only the super-rich, who take tax-writeoffs for their donations to such operations as the International Crisis Group, Human Rights Watch, and other ‘non-profit’ PR firms for imperialism.

The billionaire-funded ‘charities’ are pro-invasion, not against it. (Invade to enforce ‘human rights’, and ‘oppose corruption’, etc. Or even ‘for national defense’ against countries that aren’t attacking any other but only defending their own territory against those billionaires’ countries’ aggressions.)

This is not ideological: amongst billionaires, it is unanimous.

After all, how many billionaires donated to the U.S. Presidential campaign of Bernie Sanders, or condemned what America is doing to Iraq, and to Iran, and to Venezuela, and to Syria, and to Libya, and to Russia, and to China, etc.?

None did. Their evil is unanimous: they all support American aggression.

This is not ideological, except that they all support imperialism, and they all oppose progressivism.

In that sense, it’s a class-issue, not an ideological one.

It’s the aristocracy against any democracy.

And demonizing any particular person misses the point, which is that the evil is systemic, not merely individual.

On April 21st, Alexander Mercouris (whom I consider to be the most knowledgeable and reliable commentator on U.S.-Russia relations) headlined his now daily commentary, “Russia Tells US Ambassador To Leave Russia”, and he pointed out that even during the days of the Soviet Union, when there actually was a communist Russia and only one Party that was allowed in the country, there was no time when U.S.-Russian relations were this bad.

He said (at 11:30- in the video), that what we now have is “a situation which is completely unprecedented in the history of U.S.-Russian relations. Ever since the United States restored relations with the Soviet Union after Franklin Delano Roosevelt became President in the early 1930s, there has never been a period of time, to my knowledge, when the Soviet Union or Russia did not have an ambassador in Washington, and the United States did not have an ambassador in Moscow. That is the situation we have now.”

Isn’t it time, finally, for U.S. President Joe Biden to call off his billionaire regime’s attack-dogs and cancel the sanctions, which, in any case, would far more rightly be by Russia against America, than by America against Russia?

Russia is now responding to America’s aggressions in the hope that things won’t get to the point when Russia will be forced by circumstances to launch a (first-strike) blitz nuclear attack against the U.S. regime and its allies, as the only way to avoid America likely launching such a first-strike blitz-attack against Russia.

So: Russia is responding to the U.S. regime’s expelling Russia’s Ambassador to the United States, and America’s Ambassador in Moscow is now heading back to Washington.

It seems that either Biden will end billionaire-rule over America or there will be nuclear war: WW III.

Also on April 21st, RT headlined “Putin says Russia developing high-tech nuclear & laser weapons, warning ‘provocateurs’ will regret crossing country’s red lines”, and reported that, “Speaking as part of his annual address to the Federal Assembly in Moscow on Wednesday, Putin said that his government ‘wants to have positive relationships with everyone on the international stage, including those with whom relations have broken down recently. We really don’t want to burn bridges.’

At the same time, however, he cautioned that ‘those who mistake this stance for weakness need to know that Russia’s response [to any aggression] will be asymmetrical, swift and harsh.’

Those planning provocations, he said, ‘will regret their deeds in a way they have not regretted anything else for a long time.’”

Unlike Biden and other of America’s Post-WW-II Presidents, Putin has established a record which shows that he rarely issues any threats, but that he understates when he does issue a threat.

That’s the opposite of the record of America’s recent Presidents.

His message now to the American regime is clear; it is: Back off — you will get no closer to ‘nuclear primacy’ than you have thus far done; one step farther would be a step too far, for you or anyone.

Investigative historian Eric Zuesse is the author, most recently, of  They’re Not Even Close: The Democratic vs. Republican Economic Records, 1910-2010, and of CHRIST’S VENTRILOQUISTS: The Event that Created Christianity.

Migrants among them unaccompanied minors arrive in Sicily on rescue ship