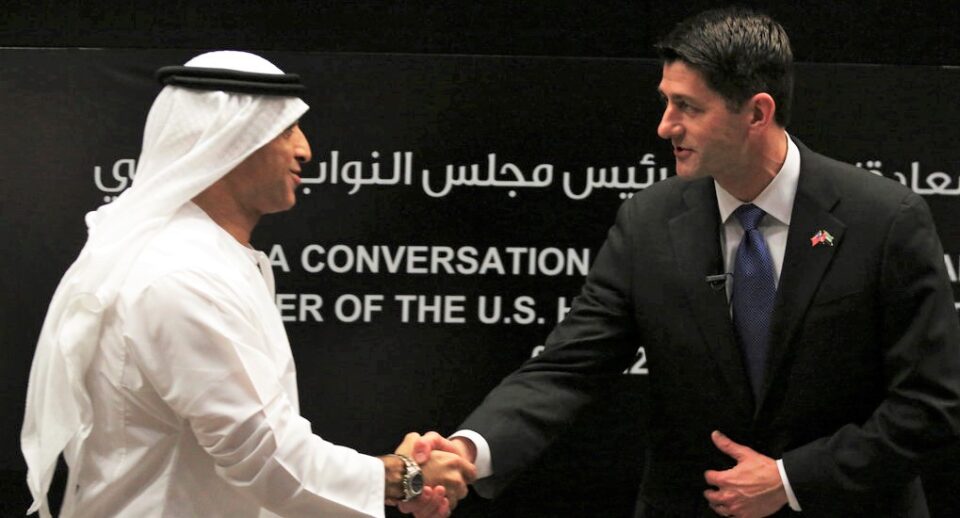 Former US Speaker of the House Paul Ryan, R-Wis., right, shakes hands with Emirati Ambassador to the US Yousef al-Otaiba, in Abu Dhabi, UAE, Jan. 25, 2018. Ryan said then that more needed to be done to challenge Iran, a message that was welcomed by his hosts in the UAE, where he was leading a Congressional delegation. (AP Photo/Jon Gambrell)

In the space of a decade, the UAE has emerged as one of the most powerful and influential forces in Washington, DC, and with great cost to democracy and human rights.

The Arabic language online magazine Sasapost published a report in February titled “Hajj (Pilgrimage) to Washington” (الحج إلى واشنطن), revealing how the United Arab Emirates (UAE) has emerged as one of the most powerful influencers among US lawmakers and policy elites, and thus ultimately over the direction of US foreign policy.

The revelations that have emerged from a review of 766 documents relating to the UAE from the US Justice Department’s database, operating under the Foreign Agents Registration Act (FARA), are jaw dropping. The files indicate that the “Emirati Lobby” – a term used to describe individuals, corporations, government, and private parties working to advance UAE interests – has paid out more than US$132 million since 2011 in disclosed payments for lobbying services to secure Emirati interests in Washington, DC—making it the largest spender among Middle East countries.

What’s also remarkable about the Emirati Lobby is the fact that it’s one of the youngest operating in the United States capital, establishing itself in 2008, only a few years before the Arab Spring and only after the appointment of Yousef al-Otaiba as UAE Ambassador to the US.

“Prior to that, most UAE contracts in the US were channeled through the Emirate of Dubai and its financial and tourism institutions, either to conclude investment agreements or to promote tourism services in Dubai,” notes Sasapost.

Once in Washington, al-Otaiba hired a number of major lobbying firms and prominent individuals within congressional channels, including Hagir Elawad, who “pioneered the war” against Qatari-based news media organization Al Jazeera; Richard Mintz, a career lobbyist employed by The Harbor Group, which mediated and formed relationships between the Emirati Lobby and US think tanks and media organizations; and the firm Akin Gumo Strauss Hauer and Feld, which played a lead role in the UAE’s effort to lobby the Trump administration into designating Al Jazeera a foreign agent and sanctifying the UAE’s nuclear energy program.