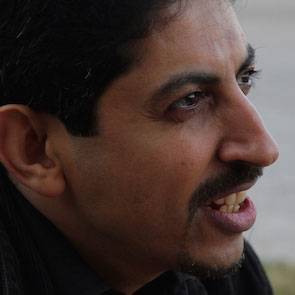 My father was arrested and tortured during the Arab Spring. My son has never known him beyond bars

My six-year-old is usually shy when his grandfather calls. My father was arrested and imprisoned years before my son was born. They first met when all three of us were behind bars. Now we wait for calls from Jau Prison to hear my father’s voice, and on one of those days when we were expecting a call, my little boy told me he wanted to ask a question. He had his little whiteboard in his hand.

“How do you spell breathe, mama?”

When the call started, my son handed me the whiteboard.

“Hi Baba Hadi, do they let you breathe?”

My father always tells us he doesn’t want his grandchildren to connect his name to anything sad or painful. He makes a point in his calls of joking and laughing with them. As I heard him try to reassure his grandson, the prison authorities — who always listen in — ended the call. My boy looked up at me.

“But does he have a window?”

Two thoughts crossed my mind as I struggled to respond. The first was that I am happy he doesn’t remember being in prison himself, where he accompanied me as an infant when, in 2016, I was handed a three-year sentence for tearing a picture of Bahrain’s king. Had he remembered, he would have known that there were no windows, he was ill for most of the time, and that I did, indeed, have trouble breathing.

The second thought was a flashback from the day of my father’s arrest, as I watched him from the top of the stairs being beaten bloody for leading peaceful protests in Pearl Square in Bahrain. I was frozen, unable to move, until I heard his faint voice.

A few days before his arrest, we had celebrated his 50th birthday the only way we could, as the country was under martial law. Taking a risk to leave the house, trying to avoid the riot police and armored vehicles, I went to a grocery store and bought a frozen cake and a few funny gifts. I remember a couple of wigs. We did not know how much time we had, but we knew they were coming any day. We sat in my apartment, sang happy birthday to him, ate cake, and enjoyed each other’s company. We put on the wigs and laughed, all while the helicopters whirred above. We wore our street clothes, just in case.

That was 10 years ago. My father has been in chains ever since.

My father, Abdulhadi Al Khawaja, is a human rights activist from the Kingdom of Bahrain. He had been very vocal during the 2011 Arab Spring protests, standing on the stage at Pearl Square and calling for a democratic country where people would be equal, have rights, and enjoy free speech. Importantly, he spoke against impunity.

“If someone is responsible for killing peaceful protesters, they must be put on a fair trial,” he said.

He was ordered to record a video apologizing to the king, or else he would be sexually assaulted. When he refused, they attacked.

A fair trial was not what he got. After his arrest, he was disappeared for weeks and tortured so badly that when a family member happened to see him in a military hospital, she could only recognize him by his name tag. They tortured him in the hospital, too. His jaw was so crushed, he could not eat. After two months of torture, they gave him clean clothes for the first time and allowed him to shower, then took him to see a representative of King Hamad bin Isa Al Khalifa. He was ordered to record a video apologizing to the king, or else he would be sexually assaulted. When he refused, they attacked. The only thing that saved him was that when he fell to the ground, he purposefully slammed his already broken jaw into the ground over and over so hard that even his torturers got scared.

It was months before he was finally brought before a military court and charged with “attempting to overthrow the monarchy” and “inciting hatred against the regime.” He was brought to court with a sack on his head. When it was removed, he looked nothing like himself. His head was shaven, his jaw broken. When he spoke up and told the judge that he had been tortured, he was dragged out of the courtroom and tortured more.

The court sentenced him to life in prison.

How does one heal from hearing these details, let alone from living them? For my father, there was no space or time to heal because the Bahraini regime is not done punishing him for daring to speak out in the name of the people of Bahrain. In these past 10 years, they have come up with new ways to torment him. Prisoners have nothing, so the prison administration grants them certain requests only to then take them away. The regime wants prisoners to suffer beyond the prison term and the torture.

For a while, my father had books. I would ask how he was, and his response was always, “I have my books. Every day I am somewhere new.” Then they took them all away. He was given paper and pens for a while. He wrote two books, one about his childhood dedicated to his grandchildren. Both were confiscated along with his writing material. For a while they allowed him to tend some plants he and the other prisoners had coaxed into life. During one visit, he walked into the visitation room with a bouquet for my mum, made from five leaves from the different plants they had grown. On the day of Eid, prison guards used machetes to cut them down.

We did not imagine things could get worse, but with the pandemic, they did. Facing an outbreak in prison, instead of releasing political prisoners to save their lives, the regime canceled all visits. They did nothing to curb the spread of the virus among the prisoners. In a string of leaked recordings, political prisoners have been asking the world to heed their cries. A number of the prisoners’ mothers have even taken to the streets, holding signs that read “save our children.” People around the world are trying to protect themselves and their loved ones from this deadly pandemic, but our loved ones are in overcrowded, filthy prison cells with no access to proper medical care. They can’t breathe.

It’s been 10 years of appeals and open letters, but in my country, injustice remains entrenched and unyielding. And while the cause of justice is making shy progress in the United States, American and British loyalty to Bahrain’s dictator remains unshaken. Even as I write these words, news has broken that the imprisoned torture survivor Abbas Malallah had a heart attack in his cell and died in hospital Tuesday morning after having been denied medical attention. He, like my father, had been in prison for a decade.

My father dedicated his life to fighting for justice, democracy, free speech, and accountability — things the West claims to cherish. Yet the U.S. and Britain have served as enablers of the Bahraini regime, even as it continues to imprison and torture my father and others for demanding those same values. This is more than passive acquiescence since both countries spare no opportunity to show their support for Bahrain’s authoritarian rulers. By allying with the regime against the people, the West implicates itself in all its crimes. It is time to end the impunity and speak up for those whose voices are being stifled in Bahrain’s prisons. Let my father breathe.