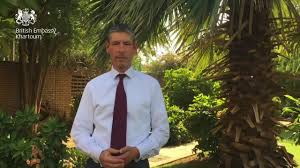 Sudanese officials expelled the UK envoy to Khartoum and set a 21-day deadline for him to return to his country.

Current Sudanese officials on Sunday set a 21-day deadline for the UK envoy to leave the country.

This comes as the UK envoy to Sudan has told earlier that the UK strongly condemns the recent actions of the Sudanese army.

On Wednesday, the African Union announced its decision to suspend Sudan from the bloc’s activities until the restoration of the country’s civilian-led transitional government, while the Word Bank froze aid and the United States paused $700m in emergency assistance. Several Western embassies in Khartoum also said they will keep recognizing deposed Prime Minister Abdalla Hamdok and his cabinet as “the constitutional leaders of the transitional government” of Sudan.

Despite the declaration of a state of emergency, tens of thousands of pro-democracy protesters poured into the streets of Khartoum and its twin city Omdurman. The demonstrations were met with gunfire by the security forces, with at least seven people killed and dozens more wounded, according to health sources.