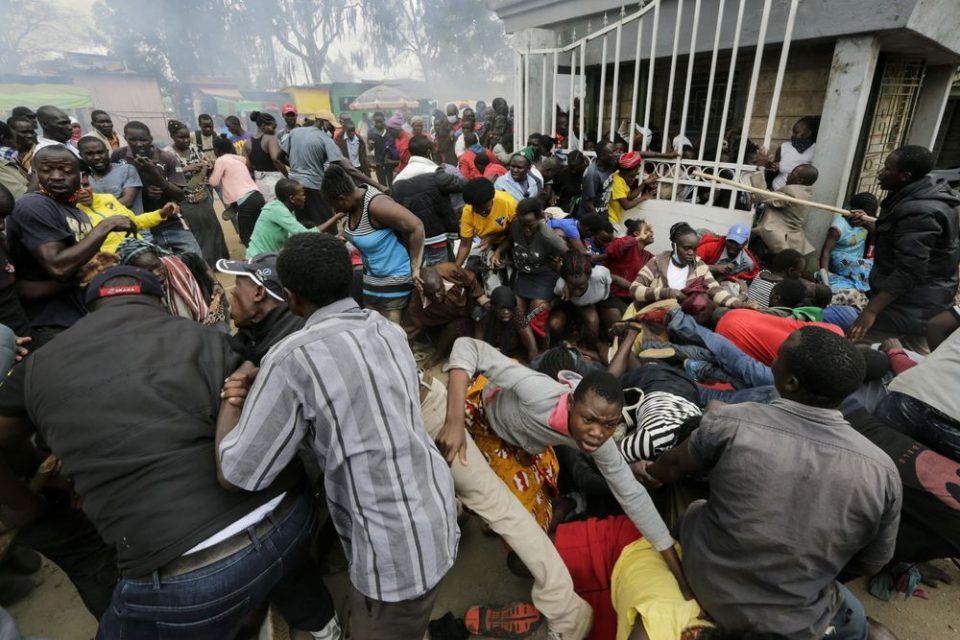 People push through a gate and create a stampede in the Kibera slum of Nairobi on April 10.

Residents of Nairobi’s Kibera slum, spotting a food distribution, tried to force their way through a gate outside a district office for their chance at supplies to keep their families fed for another day.

The scene in Kenya’s largest slum reflected the fears of millions across Africa as nearly 20 countries have imposed full lockdowns and others have shut down cities or imposed curfews. A vast population of informal workers, with little or no savings, worries about the next meal as no one knows when the measures will end. Already, Rwanda and South Africa have extended their lockdowns by two weeks.

In the Nairobi chaos, men with sticks beat people back as they fought over packages of food, some with face masks dangling off their chins. Some people fell and were trampled. Dust rose. Women shrieked. Injured people were carried to safety and placed on the ground to recover, gasping for breath.

“The people who have been injured here are very many, even we cannot count,” said one resident, Evelyn Kemunto. “Both women and children have been injured. There was a woman with twins, she has been injured, and even now she is looking for her twins. … It is food we were coming for since we are dying of hunger.”

The crowd had heard that popular opposition leader Raila Odinga had donated the food, said witness Richard Agutu Kongo, a 43-year-old who operates a motorcycle taxi. But in fact the distribution was from another well-wisher who had given selected families cards to turn in and receive aid, he said.

“They didn’t care about government restrictions that we were to stay 1 meter apart,” he added.

Kongo’s family, including six children, was given a card. They received two packets of maize meal, cooking oil and cereals.

People in the crowd “could see those with cards getting food and this caused the stampede as they tried to force their way in,” Kongo said.

He described his business as a standstill as Kenyans are discouraged from going out.

“Before, I used to make (the equivalent of) $10 and now with the coronavirus restrictions I can barely make $5,” he said. “It’s becoming hard to ensure my family gets three meals a day. Yesterday they missed breakfast.”

With Friday’s donation, his family now has enough for three meals, he said: “We are thankful for the donation, but it will only last two days.”

He lamented that Kenya’s government appears to have no plan to feed him and millions more.

Also on Friday, Kenya’s government objected to the treatment of its citizens and other Africans in the Chinese commercial hub of Guangzhou amid “stringent testing” for the virus.

A foreign ministry statement noted “unfair responses against foreigners, particularly of African origin,” especially from landlords. Some of the thousands of Africans who stay in Guangzhou as traders have reported being evicted.

The Chinese embassy has told Kenya that authorities in Guangzhou “have been tasked to take immediate action to safeguard the legitimate rights of the Africans concerned.”

In South Africa, the health minister said the nation has “parted ways with the countries with rapid spread” of the virus. South Africa has Africa’s most cases with just over 2,000, but the rate of new cases has slowed during the first two weeks of lockdown. The lockdown has been extended until April 1.

Zweli Mkhize warned that Africa’s most industrialized nation must keep up the hard work. He encouraged the widespread use of face masks but said surgical ones should be left to health workers.

In Somalia, the government ordered troops into the streets of the capital, Mogadishu, to clear out mosques during Friday prayers and enforce a virtual lockdown.

One religious leader, Sheikh Ahmed Ali, said they don’t know when the mosques will reopen. “There was no prior notice,” he said. Mogadishu’s mayor, Omar Mohamed Mohamud, on Thursday appealed for people to pray at home.

Somalia reported the biggest one-day jump in cases Friday with nine, for a total of 21. The country has one of the world’s weakest health systems. Major roads in Mogadishu have closed, and police have ordered many businesses to shut their doors.

People expressed concern about how they will survive. “The government should consider our situations and take care of us,” said a construction worker, Yusuf Sheikh Hassan.

Abdi Guled in Nairobi, via Bloomberg

How Is Relationship Between Saudi Government, Religious Apparatus?