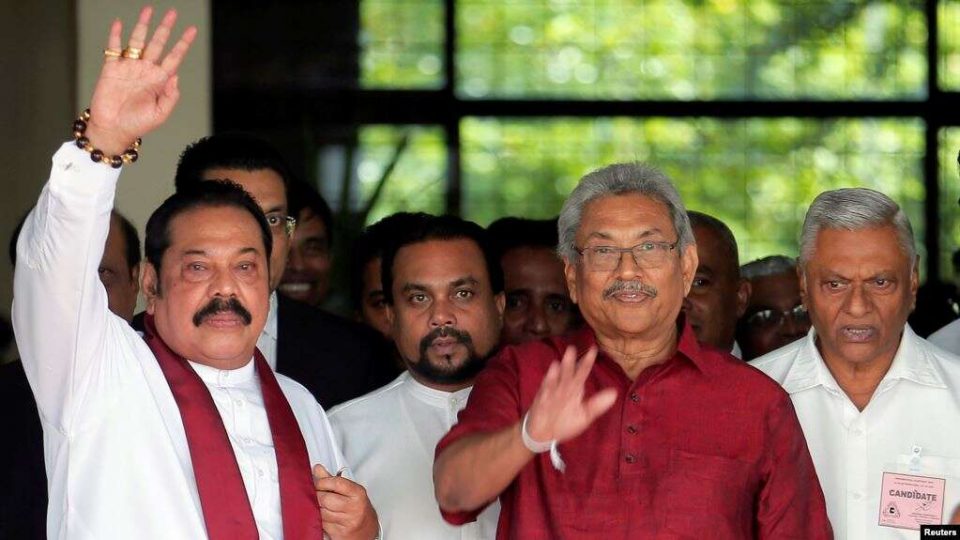 Mahinda Rajapaksaa two-term president himself, likely to be sworn as PM

Newly-elected Sri Lankan President Gotabaya Rajapaksa has named his brother Mahinda as Prime Minister, cementing the grip on power of a clan credited with crushing the Tamil Tigers a decade ago.

Mahinda, a two-term president himself, is due to be sworn in as prime minister on Thursday following the resignation of Ranil Wickremesinghe after his party suffered a humiliating defeat at the weekend’s presidential polls.

The Rajapaksa brothers are credited with brutally destroying the Tamil Tigers to end Sri Lanka’s decades-long civil war, with the security services they controlled accused of war crimes and multiple human rights abuses.

A spokesman for the new administration on Wednesday said Rajapaksa, 74, will be sworn in by his younger brother Gotabaya, aged 70. Two other brothers, Basil and Chamal, are also active in politics.

“Prime Minister Rajapaksa will have his cabinet appointed shortly after taking his oath of office,” said spokesman Vijayananda Herath.

Gotabaya was defence secretary under Mahinda during his decade as president which ended in January 2015.

With the older Rajapaksa taking over as prime minister, Sri Lanka will for the first time have two brothers at the helm. During the first Mahinda presidency, the eldest brother Chamal was the speaker of parliament.

Earlier on Wednesday, Prime Minister Ranil Wickremesinghe formally announced his resignation, clearing the way for the Rajapaksas to form a minority government ahead of snap elections, expected around April next year.

“Although we enjoy a parliamentary majority, we respect the mandate received by Mr. Rajapaksa and we have decided to allow him to form a new government,” Wickremesinghe said in an address to the nation.

Wickremesinghe, 70, said he informed the new president about quitting Thursday, allowing a new minority government to be formed.

“The prime minister will have a final meeting with his cabinet as well as other leaders of his coalition before addressing the nation to announce his resignation,” his spokesman Sudarshana Gunawardana said earlier in the day.

Wickremesinghe’s party put forward Sajith Premadasa in the presidential election but was soundly beaten by Gotabaya in a highly divisive election in the island nation of 21.6 million.

Local media separately reported that Rajapaksa, of the Sri Lanka Podujana Peramuna (SLPP), would soon name an interim cabinet to govern the island until the next parliamentary election, expected around April.

Neither the UNP nor the opposition SLPP has an absolute parliamentary majority to form a government. Mahinda Rajapaksa is expected to seek the post of prime minister in the next parliamentary election.

In the lead-up to the presidential vote, Rajapaksa’s campaign stressed on his credentials as the defence secretary that a decade ago brought a close to a bloody 26-year civil war between government forces and Tamil rebels.

The new president has pledged to fight corruption and improve security in the wake of a series of bombings on Easter Sunday that killed more than 260 people, responsibility for which was claimed by the Islamic State of Iraq and the Levant (ISIL or ISIS) armed group.

Rights groups have long called for investigations into alleged rights abuses committed during the Rajapaksas previous terms in power, including United Nations allegations that more than 40,000 people were killed by security forces in the final days of the country’s civil war in the north, as Tamil rebels took shelter among civilians.

The new president also faces a civil suit in the United States for allegedly ordering the torture of a Tamil man and several others when he was the defence secretary.