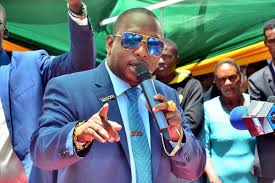 In a letter to Treasury by County Secretary Justus Kathenge to the National Treasury dated April 29, Sonko accused the Central government of breach of the terms of the deed of transfer if functions,

“This is to inform you that I am under firm and clear instructions from His Excellency the governor as chief executive officer of the Nairobi City County Government not to provide any related information,” reads the letter in part.

“This is due to consistent and persistent breach of the terms of the deed of transfer if functions. Be informed His Excellency the governor has initiated the process of pulling out of the arrangements to revert the functions to Nairobi City County.” In a letter dated April 28, Joseph Welimo on behalf of the internal auditor requested for information that would facilitate handing over of the functions transferred to the National Government,

However, the Sonko government has defied the request.

“Our letter was very clear on which information was required from the four departments and the ancillary services. After reviewing the information provided to us vide your above reference letter, it was noted that most of the information requested has not been provided,” Welimo said in the April 28 letter.

On April 22, Sonko threatened to move to court to terminate the deed of transfer, saying that he had not read the document before signing.

“I will not sign (resign) in fact this the time to terminate the transfer of functions deed. To date, I have not been furnished with a copy of the deed. I was not given sufficient time to even read the draft. I was just told it is a good thing on service delivery to the Great people of Nairobi as I deal with my court cases since I love you people of Nairobi and I have your interests at heart I had to accept without even going through the document thoroughly, I didn’t know it will turn against us, ” Sonko wrote.

In the deal witnessed by President Uhuru Kenyatta at State House Nairobi in February and March this year, Sonko surrendered county health services, transport, planning and development and public works and utilities to the State.

Thereafter, the President unveiled the Nairobi Metropolitan Services (NMS) leadership led by Director General Major General Mohamed Badi to be in charge of the transferred functions.

‘Another Wuhan in the making’?: Undercover in a Thailand market selling live animals