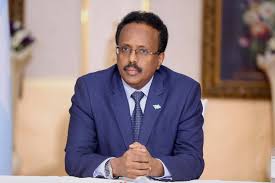 April 28, 2021
Somalia president Mohamed Abdullahi Farmajo has finally  agreed not to extend his term in office.
Somalia President Mohamed Farmajo Calls for Early Elections and Agrees for Inclusive Dialogue Somalia President Mohamed Farmajo agrees not to extend his term in office. Photo: Mohamed Farmajo. Source: Twitter Farmajo who appeared to prove his critics wrong also agreed to return to the negotiation table with regional leaders to pave way for elections.
He was addressing a press conference on the night of Tuesday, April 27, which was widely watched by thousands of viewers who had tuned in to three live streaming stations.
“Unfortunately, our efforts were hampered by individuals, and foreign entities who have no aim other than to destabilize the country and take it back,” President Farmaajo said.
There has been tension in the country after Farmajo extended his presidential mandate in February 2021, sparking a fresh round of political violence.
On Monday, April 19, Farmajo flew to the Democratic Republic of Congo where he held bilateral talks with President Felix Tshisekedi who doubles as the African Union (AU) chairman.
During the visit to the DRC, Farmajo disclosed that they discussed further strengthening bilateral relations between their two counties and also the key role AU plays in the democratic development of Africa.
“I welcome the AfricanUnion to take a leading role in facilitating an election process in which every citizen elects their representatives through free and fair elections. All Somali stakeholders will actively participate in the dialogue on the future of our democracy,” Farmajo said after meeting Tshisekedi.
previous post