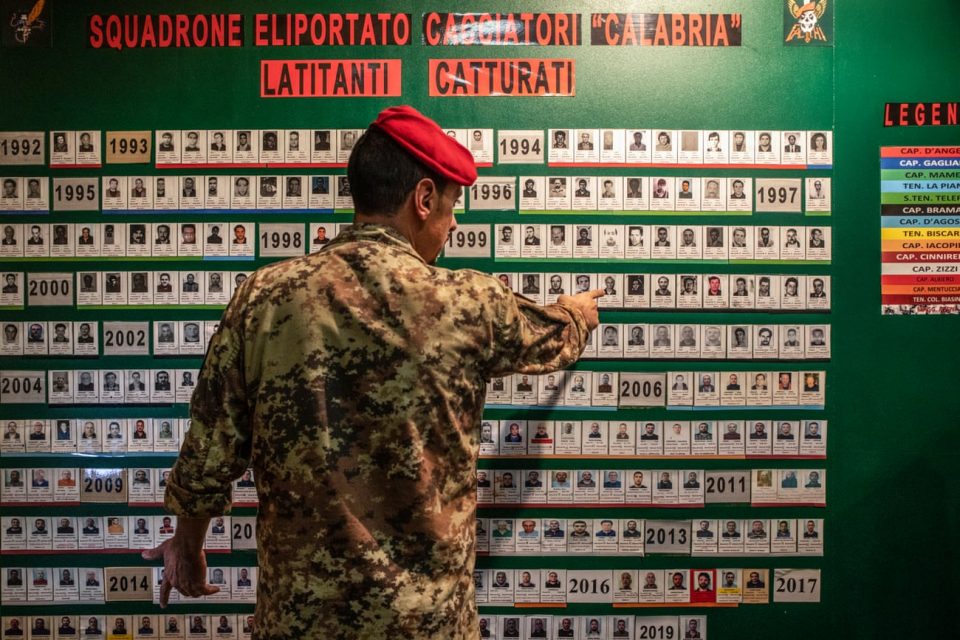 n the slopes of the Aspromonte mountains, Pasquale Marando, a man known as the Pablo Escobar of the Calabrian mafia, the feared ’Ndrangheta, built a secret bunker whose entrance was the mouth of a pizza oven.

Less than 10 miles away, Ernesto Fazzalari, who allegedly enjoyed trap shooting with the heads of his decapitated victims, lived in a 10 square-metre hideout in the formidable southern Italian range. When authorities came for him in 2004, Fazzalari, then the second most-wanted mafia boss after Matteo Messina Denaro of the Sicilian Cosa Nostra, had already escaped through a secret tunnel under the kitchen sink.

Before his eventual arrest in 2016, Fazzalari spent 20 years as a fugitive in the Calabrian mountains, where the wanted men of the ’Ndrangheta have for decades planned and built elaborate mirror cities underneath their villages. It is a literal underworld of bunkers located behind sliding staircases, hidden trapdoors and manholes linked by endless tunnels that merge and separate, leading to escape routes among the sewer system or amid the brambles of a dry river bed.

To smoke them out of their holes the Italian authorities formed a special military unit composed of elite and highly trained soldiers known as the Carabinieri Heliborne Squadron, or the Cacciatori, literally: the hunters.

The Cacciatori have in the last 25 years arrested almost 300 fugitives, whose mugshots are now displayed like trophies on a large bulletin board in a room in their headquarters. They have also uncovered over 400 bunkers, described by investigators as “works of superior engineering”.

The unit was originally founded in 1991 with the intent of fighting a crime at that time widespread across Calabria: kidnapping. “But over time that phenomenon almost disappeared,” Major Carmelo Aveni, commander of the Cacciatori, explained. “Another criminal emergency took hold: old ’Ndrangheta bosses, who had always been present in the area, began to get stronger and bolder.”

At one time derided by the Sicilian and Campanian mafias, today the ’Ndrangheta is by far the most powerful criminal group in Italy and one of the richest in the world. A study by the Demoskopita Research Institute in 2013 estimated that it was more financially powerful than Deutsche Bank and McDonald’s combined, with an annual turnover of €53bn (£44bn).

According to investigators, the secret of its success lies in its deep embeddedness in Calabria. Bosses rarely abandon their remote villages, despite global operations worth millions. To protect themselves they build escape tunnels under their houses, sophisticated bunkers in mountains that are reachable only on foot and hideouts in the woods for when they are on the run.

“If we were going to arrest them, we needed well-trained men able to climb steep mountains, abseil down ravines, jump off a moving helicopter; not to mention the ability to withstand cold and hunger for days while monitoring the movements of a suspected fugitive,” says Aveni. “And they needed to do all of this in the dark, given that we often carry out our work at night.”

During their night expeditions, the Cacciatori are equipped with machine guns, night vision goggles and bulletproof vests.

“At first sight, the bosses’ homes seem completely normal,” says Aveni. “Nothing would lead you to believe that there are tunnels or an underground bunker. Then you begin to inspect every nook and cranny of the house: walls, floors, stairs, even a pizza oven can hide a tunnel. We have even found walls wired to an electrical device. Just push a button to move the wall.

“The underground tunnels are very narrow. A person can barely fit through and must slither like a snake to move. Some are 300 metres long and often lead to sewers connected to other houses.”

Fazzalari’s bunker in the Aspromonte national park had a television, air conditioning, computers, weapons and sacred images of saints and the Madonna. The Cacciatori have sometimes found copies of Italy’s penal code, which bosses study before going to trial.

The list of fugitives of the ’Ndrangheta is constantly updated, sometimes monthly. Arrested bosses are often superseded by their sons, cousins and even their wives. The latest entry is Francesco Pelle, ’Ndrangheta boss from San Vito. Five months ago, when Pelle learned that he had been sentenced to life in prison for murders, he went on the run. Aveni prefers not to discuss the case while his men search for him.

Not all the fugitive mobsters use bunkers and tunnels, some turn to nature itself as a shield. Girolamo Facchineri, 53, who was arrested in March 2018, chose to hide in a mountain shelter, among the thick woods of Cittanova. Reachable only after crossing several rivers with an all-terrain vehicle and then hiking through trails and steep slopes for 40 minutes, the shelter was completely camouflaged, covered in vegetation. Facchineri had lived there for two years in solitude, in a forest inhabited by wolves and wild boar.

Is it worth it to build a criminal empire worth millions and then live like a rat? According to investigators, it is this mindset that gives the ’Ndrangheta its strength.

“Sacrificing one’s life for the sake of the criminal family has a dual effect,” says the chief prosecutor of Catanzaro, Nicola Gratteri. “On one hand, the boss sends a message to his enemies, who could capitalise on his absence from the territory in order to take control of it, as if to say: ‘I’m still here, and I’m still in charge.’

“On the other hand, it sends a message to investigators: ‘I’m still here and you won’t find me.’”

After a long, night-time operation to reach Facchineri, the Cacciatori raided the shelter at dawn, when the boss was making his morning coffee. “When we broke down the door, he was sitting on a chair sipping his espresso,” a member of the Cacciatori who took part in the mission told the Guardian. “He complimented us and told us we were very competent in having located him.”