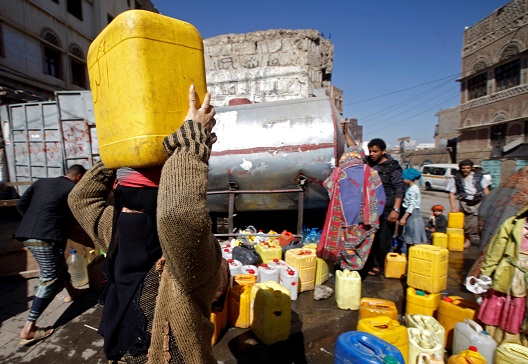 Located in a dry and semi-arid region, Yemen has always been faced with a severe water crisis. The harshness of nature has been exacerbated in recent years by the cruelty of the Saudi-led coalition against the Yemeni nation.

Right now, more than 90% of the population struggles every day to find or buy enough clean water to drink or to grow crops.

The situation is alarming in Sana’a. The capital of Yemen is home to more than 4 million people and a refuge for hundreds of thousands of internally displaced Yemenis.

Sana’a is the only capital city in the world that may run out of water within a few years. Dozens of water wells in Sana’a Basin have already dried up this year alone.

Thousands of people have to drink and wash from polluted water sources like ponds and dams, while many have no choice but to send their children to faraway places to fetch clean water.

Yemen’s network of water pipes which reaches only 30% of the nation has seriously been damaged by Saudi aircraft and ground forces. The ongoing war has made the upgrading and maintenance of the water network almost impossible in many places.

Saudi Arabia has reportedly been preventing access to storage tanks and pipes and as a result more than 15 million people resort to expensive and arduous ways to find enough water for their daily consumption.

The country does have enough water resources for the time being. However, the problem is not having access, or not having the proper management for these water resources because of the war by Saudi Arabia and because of the blockade on Yemen’s economy, and these two factors are making it almost impossible to properly manage Yemeni Aquifers, water facilities, water, water stations across the country.

These are the primary resources for water for Yemenis. the war effort by Saudi Arabia is also hindering and sabotaging all efforts to establish a water scarcity awareness programme that could help enforce water regulation laws that can help pave the way for a functioning water system that caters to domestic needs, agricultural needs, and industrial needs.

However, because of the war the water system in Yemen is currently in crisis.

At the same time, the Saudi-imposed blockade on the country has prevented the entry of fuel, and therefore a large number of water pumps have stopped working and the costs of transporting water have exorbitantly increased.

The main pumping station for water in Sana’a is currently operating only 60 out of 330 wells due to the blockade. In addition, since the outbreak of the war in 2015 most of the water projects supported by international organizations have come to a halt.

In fact, with the green light from the White House, Riyadh is using water as a weapon to make the civilians succumb to a peace vision formulated by the coalition.

Many believe that this is the primary aim or goal of Saudi Arabia to cure the water crisis so that panic can ensue.

And obviously when panic ensues, when there’s no water access, people take matters into their own hands. And unfortunately that does result into the deterioration of establishing a proper water system that regulates how water is distributed and how water is maintained in Yemen.

The Saudis have systematically been targeting dams, wells, reservoirs, water structures and infrastructure including networks and irrigation systems. That has led to acute water shortages for both drinking and irrigation.

In 2016, Saudi fighter jets targeted a major desalination plant in the city of Mokha, causing the disruption of water supplies in numerous Ansarullah-controlled territories.

And this does seem to be a tactic that is calculated, and it’s been exercised by Saudi Arabia since the war started.

The Saudis also destroyed the seawater desalination plant on Kamaran Island in Hodeidah.

As of early March this year, Saudi attacks destroyed 1488 water installations including dams and reservoirs completely.

You know it’s amazing that under the circumstances Yemenis are still able to put up a resistance effort against Saudi Arabia.

However, unfortunately, Saudi Arabia has succeeded in one thing and that is killing people, killing innocent people across Yemen, and they’re doing it in a number of ways, one of which is the air-strikes. And another way that Saudi Arabia is using to kill Yemenis is cutting off their supplies [access] to basic necessities such as water, electricity, and hospitals.

The bombing of freshwater sources has, on the other hand, contributed to the rapid spread of a devastating cholera outbreak in Yemen.

“We suffer from the cholera which was brought to us by the aggressor’s air forces. Neither the Ministry of Health nor the United Nations care about our water; No one cares.”

When you don’t have access to clean water sanitation fails, and that’s when you start to witness cholera outbreak across the country.

And when you start to zoom in and look at the main cause of this you see that this is because of the Saudi destruction of critical water infrastructure that is leaving millions of Yemenis with unsafe and unclean water.

And most of these cholera outbreaks are actually happening in Yemeni refugee camps.

We actually visited one of these camps, two years ago, and were able to discover that the main source of water for these refugees was a contaminated, an infested, water well that the refugees were usually using as their main water supply.

And because that was their only source of water they had to continue using it, and unfortunately, that resulted in another cholera outbreak at the refugee camp, and I’m sure that’s the case in most refugee camps across the country.

Much of Yemeni soil has dried up; poverty is grinding and widespread, as the deadly blockade persists in the absence of any international pressure.

Without water, neither man nor nature can survive.

Without water, not only are people thirsty but also crops cannot grow. And without crops, there is no food, making it difficult for the war-weary Yemenis to deal with two catastrophes at once.