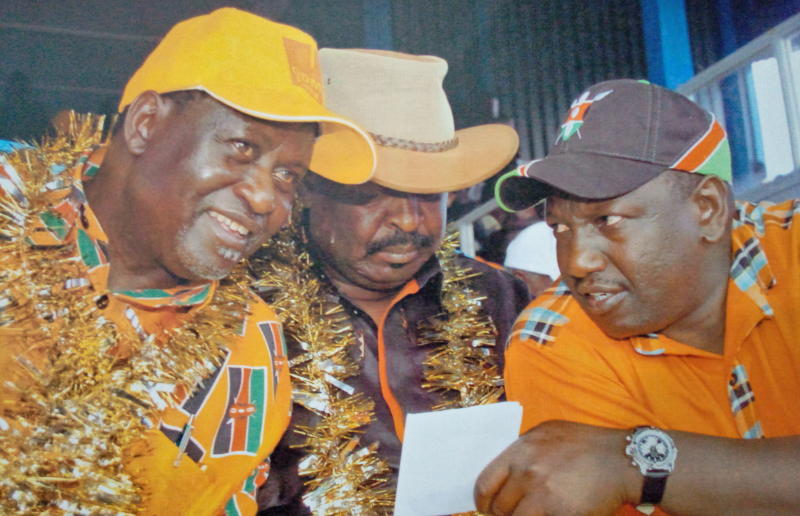 The recent by-election in Kibra was positioned as such, with the two as the protagonists. From the outset, the Building Bridges Initiative (BBI) has been debated around the same two leaders. So, too, has been the handshake that gave birth to the BBI. Within this Ruto-Raila antagonistic divide, everything else seems to be lost, including all other presidential hopefuls. Also lost are the issues that should inform political competition. Ruto and Raila are mirrored in almost every happening, at their expense. The competition between the two leaders demonstrates just how far apart two political allies can drift. For only 11 years ago, the two were political bosom friends. Back then, they schemed how to wrestle power from President Mwai Kibaki. The man who is deputy president today was Raila’s junior political partner, seeking to help him ascend to the presidency.

Raila had recently been named the ODM presidential flag bearer in what would turn out to be the most violent race for State House in Kenya’s history. He named Musalia Mudavadi his deputy. Ruto, they agreed, would be a prime minister in a new arrangement that they purposed to put in place once they won the election. Things were truly looking up for the Orange family that also included other luminaries as Najib Balala, Charity Ngilu and Joe Nyagah in the top echelons of their political dreams. Zealous Ruto The 2007 ODM Pentagon campaigned for Raila with the zeal of the possessed. But Ruto was the ultimate political dancer. And when the Samuel Kivuitu Electoral Commission of Kenya (ECK) bungled the election, they protested with equal zeal, once again with Ruto outdoing himself.

It is a great irony and tragedy of political history that Ruto and Raila do not agree anymore, and that civic events should be fashioned around them in mutually hostile prisms. If the two should run against each other, therefore, it would be the ultimate battle royale and falling out of friends. They could only be expected to throw everything in this political race of their lives. Some things would work for each of them, while others would be challenges to urgently remedy or find alternative solutions to.

First would be the question of pre-election alliance formation. All the great generals who have won great battles in history began with cooperation agreements and treaties with other generals. These were sometimes treaties of cooperation. They promised to work together in the event of an attack on any one of them. Alternatively, they entered into treaties of neutrality. If one of them should fight against a third party, the other general would not join in. It is the same in politics. Both Ruto and Raila would need both treaties of cooperation and neutrality. Cooperation would be where they recruit other political notables across the country to work with them in one alliance. Conversely, a neutrality treaty would be, in fact, not so neutral. For it would be an agreement that brings the third party in the race, basically as a spoiler, to neutralise the enemy in some constituency. Hence, the two leaders would be very keen to have on their side other notable politicians like ANC’s Musalia Mudavadi, Wiper’s Kalonzo Musyoka and Ford Kenya’s Moses Wetang’ula. Where they cannot have them, they would both seek to neutralise them in their own spaces and to have a new crop of locals rising against them. Already, Raila seems to have sensed the need for this. Accordingly, he has attempted to build new partnerships with leaders like Kakamega Governor Wycliffe Oparanya, where he previously worked with Mr Mudavadi and Mr Wetang’ula among the Luhya. He has also been experimenting with political neophytes like ANC’s nominated MP Godfrey Osotsi and Kakamega Senator Cleophas Malala, to engage in political drama against Mudavadi and Wetang’ula.

The biggest challenge facing Raila in alliance formation is trust. From 1994 when he fell out with Kijana Wamalwa in Ford Kenya, the ODM leader has built a long catalogue of found-and-lost political friends. There is hardly any notable politician in the country over the past 28 years who has not been with him and gone on to fall out with him. In no sequence at all, he worked and fell out with President Daniel Moi and other Kanu leaders in 2002. Past alliances He also worked in Narc with Kibaki, Kiraitu Murungi, Kivutha Kibwana, Kalonzo, Julia Ojiambo, Martha Karua, Moody Awori, Mukhisa Kituyi, Musikari Kombo, Ngilu and Wetang’ula, among others. By 2007, only Ms Ngilu was with him among those in this team. Earlier, in 1996, he had a political tryst with Ken Matiba and Kimani Wanyoike of Saba Saba Asili. The dalliance died a natural death. In 2005, he found new friends, including Mudavadi and Ruto, who had been in the adversary Kanu team in 2002, as had been the late Mutula Kilonzo and Uhuru Kenyatta. They came courtesy of the 2005 constitutional referendum. Uhuru would remain with him for a while after the referendum, before abandoning him in 2006 for Kibaki. In 2007 Kalonzo and Prof Ojiambo abandoned him. After the formation of the Grand Coalition Government in 2008, his Orange team began disintegrating at an alarming pace.

The list of friends has continued to get thin with the passage of time, forcing him to look for replacements.

Much of the team around Raila today comprises political apprentices and sundry greenhorns. To his advantage, however, he could hone them according to his choice. The downswing has been absence of political mileage. The BBI report, for example, shows lack of political astuteness on his part. It is ironic that some of his lieutenants are now rejecting their own report. It is a measure of political naivety on their part. A more seasoned team should have managed BBI to their full advantage. Raila must urgently take a long and wise look at his team. Conversely, in matters of alliance formation, Ruto has done quite well for himself so far, apart from the 2002 – 2007 period, when he was on the losing Kanu side, as Uhuru’s sidekick. After that he was with Raila in 2007 and with Uhuru again in 2013 and 2017. He has demonstrated all the way that he can be a fiercely loyal player. It was this loyalty that made him end up at The Hague in the post-2007 dispensation. Trust would not be a major issue against him in alliance formation. His challenges rest elsewhere. The question of perceptions about corruption, whether real or false, is the big challenge that Ruto must contend with. There are those who believe that he has been named virtually everywhere, whenever there is a big story about impropriety. Is he involved or not? That is not the issue. The issue is that the perception is there. He must work on this, for it is his biggest setback. Raila does not seem to have a major public challenge here. Yet, politics being what it is, his family name shows up fairly often in matters like the Triton fuel scandal, Kenya Railways land all over the country, the molasses plant in Kisumu, and the maize scandal during the “nusu mkate” government, among others. Again, it does not matter whether these things are true or not. The perception is out there and someone could escalate it in the coming days. He must address it. Democratic credentials Finally is the question of their democratic credentials. Raila casts himself in the mould of a democrat and a liberator. This could work well for him. Yet, he must still address the question of democracy for his Luo people. While he attempts to cut the image of a consumate national democrat, back in the community every head must remain under water. He rules the Luo with an iron fist. His dealings with his people make him hard to trust. The elite class in this community stands with him out of fear rather than love. He has to address this. Ruto, too, must address his dealings with the Kalenjin. Both leaders brook no dissent within the home groups. They must bring out the more humane side of their personalities. They must teach their followers to like them more and fear them less. Moreover, Ruto must loop in the gathering around Baringo Senator Gideon Moi and that around former Bomet Governor Isaac Ruto. Having done this, both must persuade the rest of the country that they are capable of being inclusive in distribution of opportunities to the rest of the country. They both are rather weak on this count.