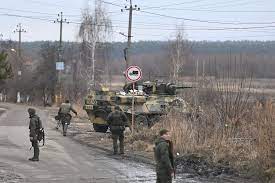 Via The Globe and Mail

Russian troops have entered Kyiv from the north, Ukraine’s Defence Ministry said in a statement that called on residents to prepare to fight.

The Defence Ministry said Russian reconnaissance units were now in the Obolon neighbourhood, close to Kyiv’s historic Podil district. “We ask citizens to inform about the movement of equipment!” the statement said. “Make Molotov cocktails, neutralize the occupier!”

The Ukrainian government said they had destroyed three bridges on the northern approach to the capital to slow the Russian advance.

Overnight, there were loud explosions audible in the city. The site of one blast that was visited by The Globe on Friday appeared to have been caused by a projectile that landed metres from an apartment block in the city’s Darnitsky region, blowing windows and part of the outer wall off the 10-storey building. The Ukrainian military said it was a Russian cruise missile that had been shot down by the city’s air defences. Residents said many ambulances had arrived, but they were unsure how many people had been killed or injured.

Russia began invading Ukraine from three directions on Thursday, with air strikes targeting cities across the country in an attack on a scale not seen in Europe since the Second World War that left tens of thousands of Ukrainians fleeing for safety.

Kyiv’s main Boryspil International Airport was hit in Thursday morning’s first wave of attacks, and Russian paratroopers appeared to have taken control of the city’s Hostomel cargo airport by the end of Thursday after a battle that involved a squadron of Russian attack helicopters. Control of Hostomel would allow Russia to fly more troops to the edge of Kyiv, which Western officials believe is Russian President Vladimir Putin’s main target.

After encountering fierce resistance from Ukrainian forces in the Chernihiv region north of Kyiv, Russian troops stationed in allied Belarus opened a separate line of attack through the exclusion zone created by the 1986 Chernobyl nuclear disaster, raising the prospect of damage being done to the radioactive waste storage facility there.

Intense fighting also raged in the country’s east. Russian troops entered the city of Sumy near the border with Russia that sits on a highway leading to Kyiv from the east. The regional governor, Dmytro Zhivitsky, said Ukrainian forces fought Russian troops in the city overnight, but other Russian convoys kept rolling west toward the Ukrainian capital.

As the threat of a battle for the capital grew, tens of thousands of Kyiv residents packed their lives into cars and headed toward the relative safety of Western Ukraine, and the European Union beyond. The exodus created hours-long traffic jams that stretched to the horizon. Ukrainian President Volodymyr Zelenskyy says 137 civilians and military personnel have been killed so far in the Russian invasion of his country.

The last-minute panic was caused in part by the Ukrainian government’s strategy of playing down the threat of invasion, saying it had been hyped up by Western governments and media. Kyiv abruptly switched tactics this week, declaring a state of emergency and calling up some reservists on Wednesday. On Thursday, a dusk-till-dawn curfew was introduced in most of the country.

Russian troops also pushed into Ukraine from the east – in the direction of Ukraine’s second largest city, Kharkiv – and from the south, pushing toward the city of Kherson from Crimea, which Russia seized and illegally annexed from Ukraine eight years ago. Amphibious commandoes were also reported to have landed near the Black Sea port of Odessa.

Mr. Putin has said Russia plans to “demilitarize” Ukraine, claiming that Kyiv’s desire to seek membership in the NATO military alliance – always a remote prospect – posed a threat to his country’s security. In televised remarks just as the offensive began, Mr. Putin warned outside countries not to intervene, or it would “lead to consequences you have never seen in history.”

Mr. Zelensky compared the Russian attacks to Nazi Germany’s invasions of its neighbours during the Second World War and appealed for the international community to intervene. “If you don’t help us now, if you fail to offer strong assistance to Ukraine, tomorrow the war will knock on your door.”

Speaking specifically of the Russian military thrust via Chernobyl, Mr. Zelensky said Ukrainian troops were “giving their lives so that the tragedy of 1986 will not be repeated.” He added “this is a declaration of war against the whole of Europe.” The abandoned nuclear facility was later captured by Russian troops.

Ukraine claimed to have shot down four Russian attack helicopters in fighting near Kyiv, a statement that couldn’t be independently verified. At least 40 Ukrainian soldiers were reportedly killed in Thursday’s fighting, plus an unspecified number who died when an Antonov military transport plane was shot down.