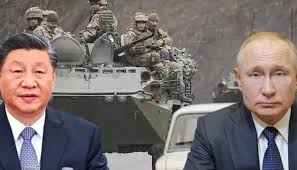 US official claims Russia seeking financial and military aid from China for ongoing assault on Ukraine.

Russia is reportedly seeking military support from China to boost its ongoing invasion of Ukraine, along with requests for financial aid from Beijing.

A US official was cited by The Washington Post and the Financial Times Monday morning, saying that Russia asked China several days ago for military equipment to bolster its forces fighting in Ukraine.

The request comes ahead of a planned meeting in Rome Monday between US and Chinese officials.

China has also reportedly received requests for economic aid, with Russia hoping Beijing will enable Moscow to ameliorate some of the effects of international sanctions.

“We will not allow that to go forward,” he said.

Peace talks are set to resume between Russia and Ukraine Monday morning, a week after the last round of negotiations in Belarus.