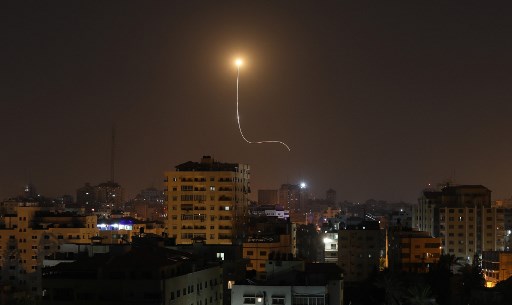 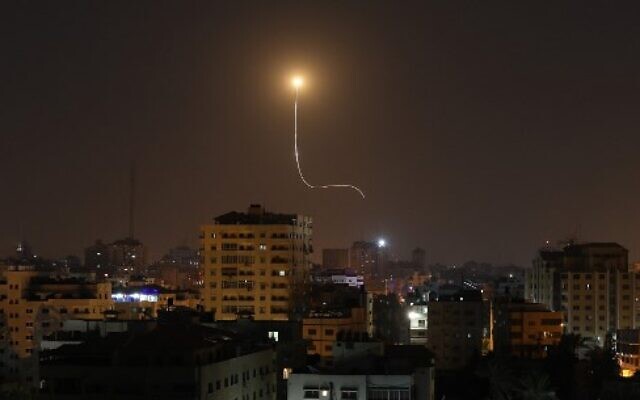 Terrorists in the Gaza Strip  continued to fire rockets into Israel after midnight Wednesday even as an Israeli official indicated that Jerusalem was nearing a ceasefire agreement with the Palestinian Islamic Jihad terror group.

“Quiet will be answered with quiet, and actions in the field will be the deciding factor,” the diplomatic official said, on condition of anonymity.

After midnight sirens were triggered in Ashdod, Ashkelon and the surrounding communities. A local official said five rockets were intercepted by Iron Dome, although there was no immediate confirmation from the IDF

Shortly before midnight sirens were triggered in Rehovot, Ashdod, Gedera, Yavne and the surrounding communities, sending hundreds of thousands of Israelis rushing to bomb shelters.

However, the IDF said that just one rocket was fired and intercepted over Israel, but its trajectory, together with shrapnel from the interceptor, set off multiple warnings.

The Magen David Adom ambulance service said one person sustained light injuries after he fell while running to a bomb shelter.

Earlier on Wednesday night, several rounds of rocket barrages were fired at the cities of Ashdod and Ashkelon, north of Gaza, causing no injuries but a small amount of damage. 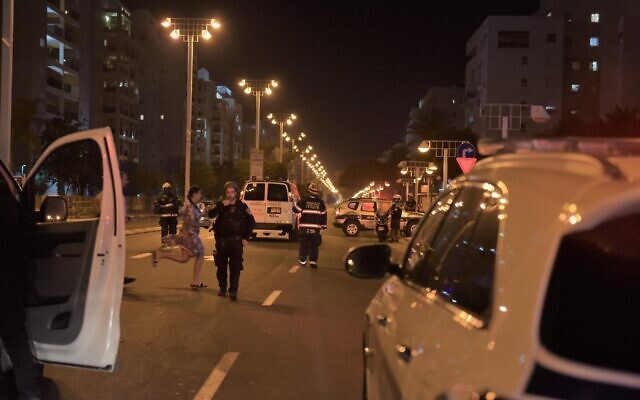 Police sappers remove fragments of a rocket fired from Gaza that was intercepted by an Iron Dome missile, which landed in a street in the city of Ashdod on November 13, 2019. (Israel Police)

In response to these rocket attacks, the Israel Defense Forces launched a series of strikes against PIJ targets in the Gaza Strip on Wednesday night, bombing a command center and a military base in the city of Khan Younis in southern Gaza, as well as a training base used by the terror group’s naval commando unit, which was also used to store weapons, according to the IDF.

The anonymous diplomatic official said the late Wednesday night rocket fire by the terror group appeared to be an effort to make it seem as though the past two days of fighting were a success.

“The Islamic Jihad wants a ceasefire and therefore it is trying to create a false presentation of achievements. The Jihad’s demands prove that Israel’s operations were a success. The IDF killed 20 terrorists and significantly harmed the Jihad’s capabilities,” the official said. 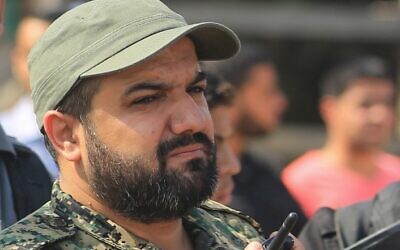 This round of fighting began at 4 a.m. on Tuesday, when the Israeli Air Force carried out a precision strike on a building in the Shejaiya area of Gaza City where Abu al-Ata was located, killing him and his wife, in a joint operation by the IDF and Shin Bet security service.

According to the IDF, over 360 projectiles were fired into Israel from the Gaza Strip, with the majority of them landing in open fields. Dozens of rockets were also launched toward Israel but failed to clear the border and landed in the Strip. 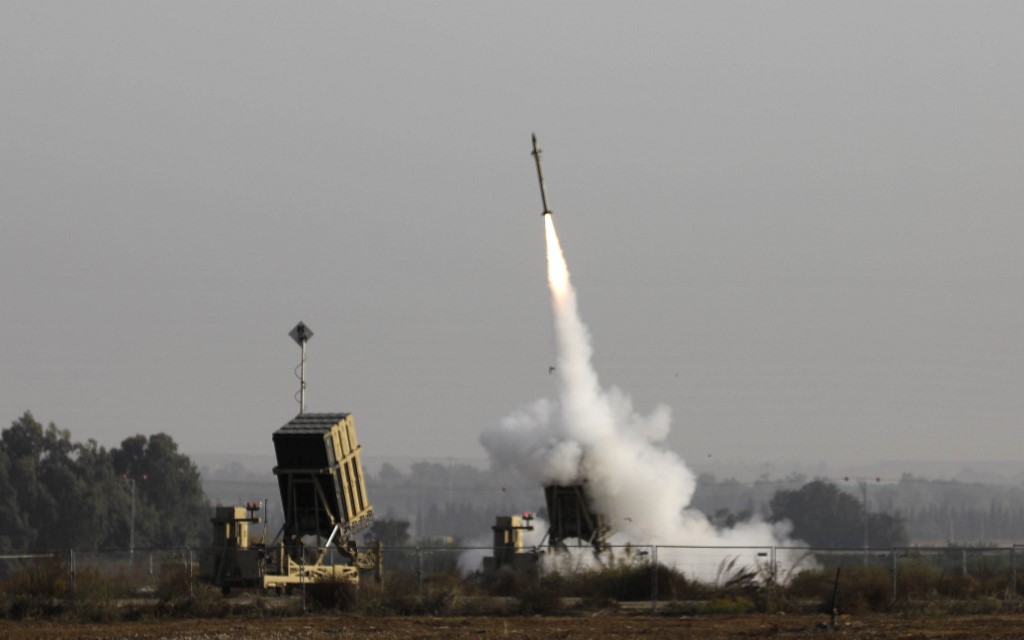 An Israeli missile launched from the Iron Dome defence missile system, designed to intercept and destroy incoming short-range rockets and artillery shells, is pictured in the southern Israeli city of Sderot on November 12, 2019. (MENAHEM KAHANA / AFP)

Three Israelis were directly wounded by the rockets, including a 70-year-old woman who sustained moderate injuries on Wednesday when she was struck by glass shards from a window in her apartment that exploded as a projectile hit. The other two people sustained light injuries from shrapnel, medics said. In addition, dozens of people were lightly hurt after they fell while running to bomb shelters.

In response to the rocket attacks, the IDF conducted multiple rounds of airstrikes in Gaza, targeting PIJ facilities, including underground tunnels, command centers, training bases and weapons factories, as well as squads of terrorist operatives preparing to launch rockets at Israel. 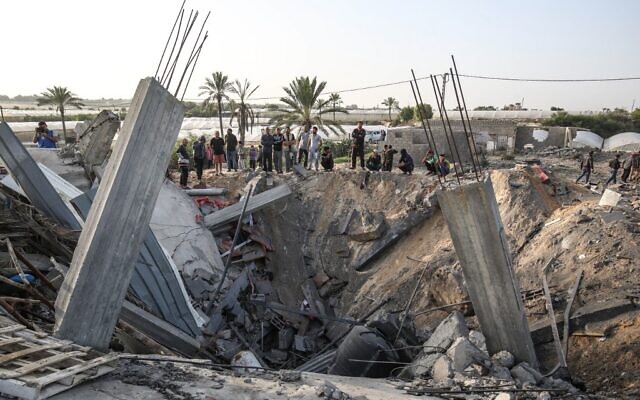 Palestinians gather around the remains of a house that the IDF says was used as a weapons cache controlled by the Palestinian Islamic Jihad, which was destroyed in an Israeli airstrike in Khan Yunis in the southern Gaza Strip November 13, 2019. (SAID KHATIB / AFP)

In total, 26 Palestinians were killed in these Israeli strikes on Tuesday and Wednesday, including Abu al-Ata and his wife, according to the Hamas-run Gaza health ministry. A seven-year-old boy and two teenagers were also killed, the ministry said.

The vast majority of those killed were identified as members of terror groups, mostly the Palestinian Islamic Jihad.

The secretary-general of the Islamic Jihad, Ziad al-Nakhala, said his group laid out its list of demands for a truce to Egyptian moderators.

“We gave specific conditions for a ceasefire,” he told the pro-Hezbollah Al Mayadeen TV station in an interview on Wednesday night. “If Israel accepts them, we will accept a ceasefire.

“If Israel does not accept them, we are going to continue to fight for an open period of time.” 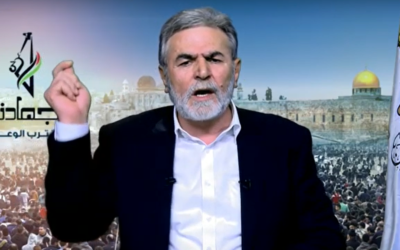 Al-Nakhala said the group’s “simple and humble” demands were: an end to assassinations of terror leaders in Gaza and the West Bank; IDF troops not firing at innocent civilians at Friday border protests; and Israel abiding by the understandings regarding Gaza reached in Cairo during previous ceasefire negotiations.

In the past year, both the Egyptian General Intelligence Services and UN Special Coordinator to the Middle East Peace Process Nickolay Mladenov have been involved in brokering multiple unofficial armistices between Israel and the Gaza terror groups.

These agreements generally provide some reconstruction resources to Hamas in exchange for an end to active hostilities.

Israel and Gaza have engaged in several sporadic rounds of violence over the last two years as the sides attempted to reach a long-term ceasefire.