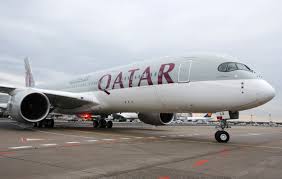 Qatar Airways received a 7.3-billion-riyal ($1.95 billion) lifeline from the Qatar government after losing 7 billion riyals in the year to March 31, the state-owned group disclosed on Sunday.

Several countries, including the United States, have stepped in to help airlines hammered by the coronavirus crisis that brought global travel to a near-halt earlier this year.
The lifeline was provided to Qatar Airways after annual losses exceeded 50 percent of share capital and was later converted into new shares, said the airline’s financial statement.
Qatar Airways, which has slashed jobs and delayed new aircraft deliveries due to the pandemic, flagged in March that it would seek state support but had not until now disclosed the funding.
The airline said the 2019-20 financial year had been one of the most difficult in its nearly three-decade history, with losses widening from a restated 4.5-billion-riyal loss in the previous year.
The airline saw revenue increase 6.5 percent to 51.1 million riyals. Passengers carried rose 10 percent to 32.4 million.
The true impact of the crisis on Qatar Airways is unclear as global lockdowns continued beyond its financial year-end.
Qatar Airways Group includes the airline, management of Qatar’s international airport and other aviation assets.
Air Italy, in which Qatar Airways held a minority stake, went into liquidation in February