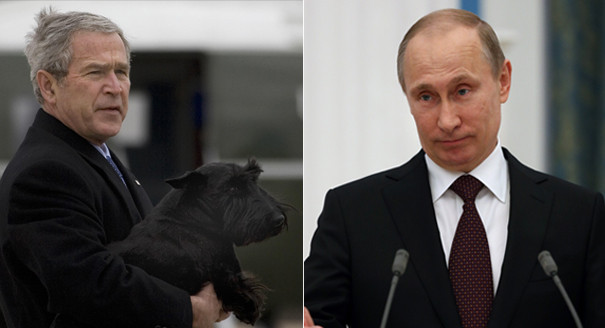 The Russian strongman’s ‘war of choice’ will go as badly as Bush’s Iraq adventure
by Brandon J Weichert
February 24, 2022

Recently, Pentagon spokesman John Kirby chided Russian strongman Vladimir Putin, warning that invading Ukraine would initiate a bloody “war of choice” that the Russians might not win. To which, I am certain, Putin would reply, “Just like you did in Iraq!”

And while most Western elites might scoff at that comment as dishonorable moral equivalency with an autocrat, it is imperative that American leaders begin understanding the adage that “what’s good for the goose is good for the gander.”

Remember that during the Iraq war, Putin’s regime was viscerally opposed to then-US president George W Bush’s “war of choice” against Saddam Hussein’s Iraq. Bush neither cared nor listened to his Russian counterpart. The drumbeat for war in Washington was far too loud.

The neoconservative ideologues who had surrounded Bush were convinced that war in Iraq would reassert what they believed was America’s flagging power in the post-Cold War era and restore American credibility in a region of the world where the United States had little credibility remaining.

America was at the apex of its military power in 2002-03. Its leaders and people were galvanized in the wake of the attacks of September 11, 2001, to wage war upon any enemy they thought they could take on – and the Bush administration was going to do it regardless of what the international community believed or what international norms existed. That Saddam Hussein acted as a cartoon villain was an added inducement for war.

Russia chafed at the time as its power and influence were nowhere near what they are today. Moscow resisted and balked at the Americans but ultimately could do nothing to stop the invasion of Iraq.

Twenty years later, however, we are at a different point in time. Today, it is the Americans who are at their breaking point; who’ve been humiliated and dejected by 20 years of failed wars, disastrous leaders, and a volatile economic situation at home. The Russians, while nowhere near as potent today as the Americans were in the run-up to the invasion of Iraq, are at their greatest level of power since the end of the Cold War.

Empowered by extraordinarily high prices of fuel on the global market (Russia is an energy-producing superpower upon which Europe depends for roughly 40% of its energy needs), feeling unstoppable in the face of sclerotic American and ambivalent European opposition, the Putin regime is executing its own rapid invasion of a smaller nation with which it has had a long-standing conflict.

No amount of caterwauling or virtue-signaling from Western leaders will stop the Russian advance – any more than Russian grandstanding on the eve of the Iraq war could stop Bush’s war of choice. It’s about raw power and will. The Russians have the advantage in these areas today whereas the Americans had the advantages in 2003.

And like the opening phases of the Iraq war in 2003, the Russian invasion of Ukraine has gone well for Moscow so far. It manipulated the situation flawlessly: probing and provoking its rivals to keep them off balance while playing the various Western leaders off each other repeatedly – all while it massed a force large enough to overcome local opposition but small enough to keep even the most seasoned Western observers uncertain as to Russia’s true intentions.

Russia’s initial foray into the country was limited to the Russian-speaking breakaway provinces of Luhansk and Donetsk. But as time has progressed, Putin is likely looking out his window high atop the Kremlin, seeing the abject fecklessness his Western rivals are exhibiting against his fierce push into Ukraine, and wanting more.

After all, when a dictator’s blood is up and he meets little resistance from his rivals, he is keen on pressing his luck. We’ve seen this movie before. But if there’s one thing that we know about Western moviegoers it’s that they love remakes and sequels. So here is Vladimir Putin, like any producer worth his salt, delivering the goods to his hungry audience.

Going beyond that, however, is a dangerous prospect – just as invading Iraq in 2003 was the worst possible choice the Americans could have made after the 9/11 terrorist attacks. Putin likely doesn’t see the downside risks he’s facing, though.

Should Putin deploy his forces beyond eastern Ukraine, which it increasingly appears that he will do, the Russians will be met by Western-backed Ukrainians. It is unlikely that the Ukrainians would be able to resist Russia in a direct assault, but it is improbable that a direct force-on-force war is what Kiev has in mind.

Instead, Ukraine means to disperse its 200,000-strong military – and to add in its dedicated civilian population – throughout the country to wage a protracted insurgency against Russia … just as Al-Qaeda in Iraq and the Mahdi Army of Iraq did to US-led coalition forces from 2003-2006.

The Ukrainians, therefore, mean to draw the Russians into their territory and bleed them dry for however long it takes to get them to leave and never return.

Such a strategy may very well work in Ukraine’s favor. Putin, like Bush in 2003, has surrounded himself with war-crazed ideologues who think every problem Russia faces is an external threat – and that all those problems are akin to nails merely needing to be hammered by Russian brute force.

Meanwhile, high on the serotonin intoxication he’s clearly feeling from his successful invasion of eastern Ukraine, Putin may feel compelled to keep going to Kiev.

And he can likely take Kiev as rapidly as Bush took Baghdad … but then what?

Putin should learn from recent history (which he lived through). Invading a smaller country is easy to do. But holding one indefinitely is another matter entirely – especially when the population there is in open revolt against your presence and your legitimacy at home is in question.

How long can Putin last as the most powerful political force in Russia if he is waging a deeply bloody (and ultimately unpopular) war for Ukraine? He should be asking himself this.

Vladimir Putin is about to repeat the same mistaken choices that George W Bush made, with similarly terrible results. Those advising Putin should tell him to take his easy victory in eastern Ukraine and leave well enough alone.

Then again, dictators rarely listen to reason (which is why they often cause horrific wars). So will it likely be when Vladimir Putin goes to Kiev.

Brandon J Weichert is the author of Winning Space: How America Remains a Superpower. He is a geopolitical analyst who manages The Weichert Report: World News Done Right. His work appears regularly in The Washington Times and Real Clear Politics. Weichert is a former US congressional staffer who holds an MA in statecraft and national security affairs from the Institute of World Politics in Washington, DC, and is an associate member of New College, Oxford University