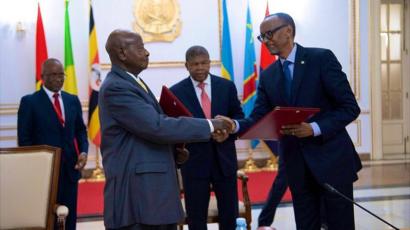 A Sunday meeting between Ugandan President Yoweri Museveni and his Rwandan counterpart, Mr Paul Kagame, in Luanda Angola, has ended with resolutions to release prisoners and promises by the two administrations not to support “destabilisers” as well as protecting human rights.

It was also agreed that an ad Hoc team would meet before the two heads of State meet again on February 21, at Katuna border, according to a tweet by Mr Don Wanyama, Mr Museveni’s press secretary.

The meeting was convened to review the August 2019 peace pact that was signed by the two leaders in Angola.

The Sunday meeting was attended by Mr Felix Tshisekedi, the president of the Democratic Republic of Congo (DRC).

DRC has been the overseer of the implementation of the Luanda Memorandum of Understanding.

This month makes it a year since the dispute came to the fore when Rwanda closed the Katuna border paralysing business and movement between the country and Uganda.

Kigali accused Kampala of detaining her citizens and supporting armed groups that want to overthrow the government.

Two meetings held between government officials – one in Kigali in September and another in Kampala last December – were not enough to resolve the dispute.

On Wednesday, Mr Kagame addressed diplomats in Kigali telling them that “he was not about to tell his citizens to return to Uganda because he has no control over them while in Uganda”.

As the dispute raged, trade between the two countries was the biggest victim. It’s estimated that Uganda has lost up to $200 million (Shs735 billion) in potential earnings if the border was open.

The end of Al-Shabaab mayhem

A world of a billion empty plates