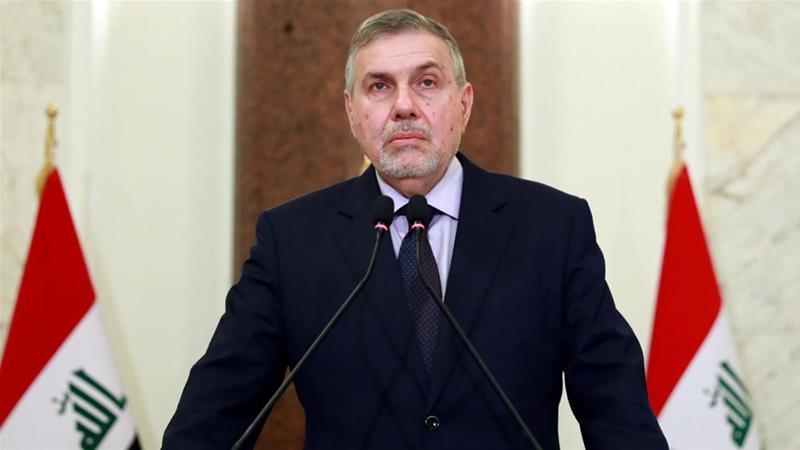 Ex-minister named as Iraq prime minister-designate, but anti-government demonstrators say he is part of ruling elite.

Baghdad, Iraq – Anti-government protesters in Iraq were quick to dismiss President Barham Salih’s appointment of Mohammed Tawfiq Allawi as prime minister-designate, as rallies took place in the capital and cities in the country’s southern provinces.

The president’s announcement came after he issued an ultimatum to Iraq’s fractious parliament, warning that if they did not appoint a new premier by Saturday he would do so himself.

But anti-government protesters did not welcome the announcement, with hundreds in the capital’s Tahrir Square chanting “Mohammed Allawi, rejected!”, videos posted on social media showed.

In the southern city of Nasiriyah, protesters issued a statement saying they categorically rejected Allawi’s selection.

“He is the compromised candidate that belongs to the sectarian power sharing political system (muhasasa) we are protesting against, and does not represent the aspirations of the protest sites,” the statement said. “Based on this, our response will be to escalate things stronger than on previous occasions.”

Allawi’s appointment, the statement continued, was brought about “by the same criminal, corrupt class that brought us to where we are now”.

Since October, anti-government protesters have called for a complete overhaul of the country’s ruling political elite and an end to corruption. Their demands include the appointment of a politically independent candidate as prime minister, early elections, and holding accountable those who have killed at least 500 protesters so far.

Despite ex-prime minister Adel Abdul Mahdi formally resigning on November 30, he agreed to continue in a caretaker capacity until a new prime minister was chosen, with the resulting deadlock leading protesters to accuse the government of deliberate stalling.

Allawi, 65, served as a communications minister under the government of former prime minister Nouri al-Maliki in 2006 and 2010. Two years later, he resigned from his post, accusing al-Maliki of “political interference” in his ministry.

Moments after his appointment was announced, Allawi shared a pre-recorded video on his Twitter page, where he addressed the protesters directly.

“My power is derived from you,” he began. “If it were not for your courage and sacrifices then there would have been no changes in the country.”

“You protested for your homeland, and if I am not able to fulfill your demands that I am unworthy of this position,” he added.

However, protesters in the capital reacted with dismay, saying that he represented the old ruling elite.

One protester, 25-year-old Yousef Abd, said there is “no doubt we reject Allawi in the position of prime minister”.

“If the government insists on forcing him on us we will definitely escalate things,” he told Al Jazeera via telephone from Tahrir Square.

“The general feeling from most protest sites is that they view Allawi as being cut from the same cloth as the politicians in power,” he told Al Jazeera. “He belongs to the same system we don’t want.”

According to Aqeel, large student demonstrations were expected to take place on Sunday against Allawi’s appointment, which he hoped would unite the protest movement in Tahrir.

Earlier on Saturday, skirmishes had taken place between Sadrist supporters and politically independent protesters, after the former took over the strategic Turkish restaurant building and drove out the other protesters from there.

The Sadrists, along with members of an affiliated militia Saraya al-Salam, had rejoined the protest a week after their leader and head of the largest bloc in parliament Muqtada al-Sadr announced his withdrawal. But on Friday, Sadr called for a renewal of “the peaceful reformist revolution”.

Sajad Jiyad, managing director of Bayan Centre, a think-tank, told Al Jazeera there had been an agreement between the largest parties in Parliament to nominate Allawi.

“Now that has happened we can expect a lot of negotiation around cabinet formation and this will be a test to see how much independence Allawi has and how much support for his nominees to the cabinet he can get from the parties in Parliament,” he said.

Jiyad added that protesters who have rejected Allawi’s nomination believe he will be “beholden to the same political system they accuse of corruption and are protesting against”.

Political analyst Sarmad al-Bayati, said it was still too early to see what affect the appointment of Allawi would have.

“Allawi was not a new name to be suggested as a candidate … But I don’t think he represents the aspirations of the Iraqi people,” he told Al Jazeera.

“He will probably face the same limitations that Adel Abdul Mahdi experienced,” he noted.

According to the constitution, a replacement for Abdul Mahdi should have been identified fifteen days after his resignation in early December. Instead, it has taken rival blocs nearly two months of jockeying to select Allawi as their consensus candidate.

Abdul Mahdi’s rise to power was the product of a provisional alliance between parliament’s two main blocs – Sairoon, led by Shia leader Moqtada al-Sadr, and Fatah, which is headed by Hadi al-Amiri and includes leaders associated with the paramilitary Popular Mobilisation Forces (PMF, or Hasdh al-Shaabi).