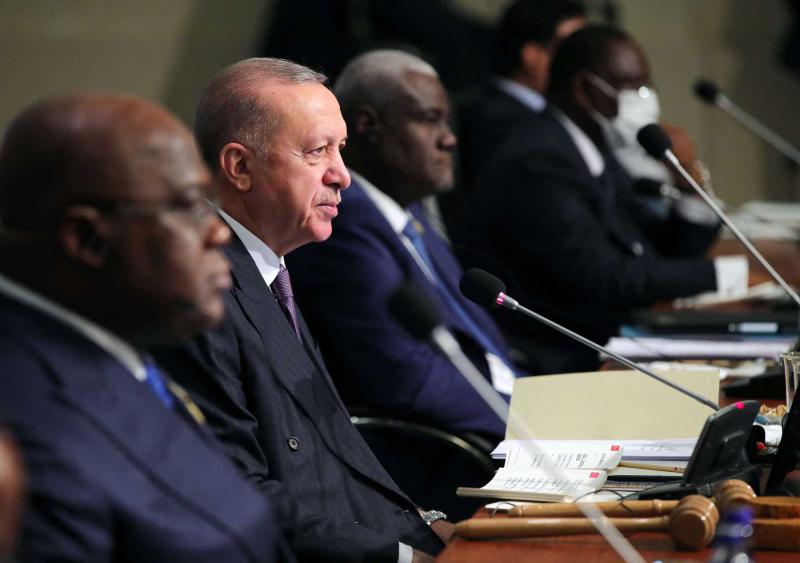 Turkey’s burgeoning reach across the African continent also gives it leverage in other parts of the world, including Europe
By Faisal Al Yafai
Warsan magazine, December 24, 2021

Turkey’s president is talking vaccines. Speaking at a landmark gathering of African leaders in Istanbul last weekend, he called the disparity in access to Covid-19 shots between the West and Africa “a global injustice.”

“It is disgraceful … that only 6% of Africa’s population has been vaccinated,” he said. Turkey, he said, would share 15 million doses of the vaccine with African nations.

The global disparity in vaccine access is indeed an injustice, one that makes the whole world less safe, as the emergence of new variants of the virus that causes this illness demonstrates. Turkey’s president was right to say that; he was also, of course, scoring political points.

Because Recep Tayyip Erdogan hadn’t invited 16 heads of state from Africa to Istanbul merely to boost economic ties. He brought them to demonstrate, through military and medical offerings, that Africa has no greater friend north of the Mediterranean.

Erdogan’s outreach to Africa has been determined and long-standing; it has been a constant of his time in power. When he first became prime minister in 2003, Turkey had 12 embassies across the continent, the majority in Arab countries. Now the number is 43. Trade has also soared, from less than US$6 billion when Erdogan became prime minister, to $26 billion now.

For the first few years of this outreach, Turkey’s focus was on Muslim African countries that were ignored by the rest of the world, like Sudan and Somalia. When Erdogan visited Mogadishu in 2011, he was the first non-African head of state to go for 20 years. Over time, however, Turkey has traded more widely across Africa, to the point where the country is one that African leaders can turn to to solve their problems.

In recent years, that means buying armed drones. “Everywhere I go in Africa, everyone asks about [Turkish drones],” Erdogan said on a recent visit to the continent.

Since the last Turkey-Africa summit in 2014, the profile of Turkey’s drone industry has skyrocketed and Ankara has demonstrated its Bayraktar armed drones can make a decisive difference. The drones were used to stop Libya’s capital from being overrun by an offensive from Khalifa Haftar and enabled a surprising Azerbaijani victory over Armenia in the 2020 Nagorno-Karabakh war.

Just this week, The New York Times reported that Ethiopia’s government had managed to turn the tide of a war that at one point looked almost lost because of drones supplied by Turkey and other countries.

Ankara hasn’t confirmed it sold drones to Addis Ababa, but last month, the prime minister of Ethiopia – locked in a bitter war against the country’s Tigray region – signed a military cooperation agreement. Turkey’s Bayraktar drones reportedly appeared in the conflict soon after.

Unsurprisingly, African countries are interested in buying them. At around $1 million to $2 million each, not only are they more than ten times cheaper than America’s flagship Reaper drones, they are also easier to obtain. Washington ensures the sale of drone technology is reserved for allies.

In military terminology, technology that allows armies to increase their fighting potential is called a force multiplier. For Turkey, drones have been a political force multiplier, giving it access to many governments.

Turkey hasn’t confirmed all the countries that have bought its drones, but those reported to have purchased or expressed interest include Ukraine, Poland and Albania, as well as Morocco, Tunisia and Rwanda. Kyrgyzstan last week took delivery of its first shipment.

The importance of Turkey’s drone diplomacy is in the doors it opens. Merely creating relationships with African countries has given it leverage in other parts of the world, too.

Take, for example, Ankara’s closeness to Ethiopia. Turkey is the country’s third-largest provider of foreign investment; in fact, almost a third of all Turkey’s investments across the continent go to Ethiopia.

That closeness to Addis Ababa gives Ankara influence with Egypt, several thousand kilometers away. With Egypt locked in a dispute with Ethiopia over the waters of the Nile, it is in Cairo’s interest for Ankara not to side too closely with Ethiopia. The same is true with Libya, where a good relationship with Tripoli influences Turkey’s relationship with France and Italy, both of which have economic interests in Libya.

In this way, Turkey’s burgeoning reach across the African continent also gives it leverage in North Africa and in Europe. Turkey, still an upper middle-income country, although one with the second-largest army in the North Atlantic Treaty Organization, can wield outsize influence through its relationships.

But Turkey has one more major advantage, which explains why so many African leaders turned up in Istanbul: history, or rather, a lack of it.

In last week’s opening speech, Erdogan returned to a theme he’s discussed before, that Africa ought to have a permanent seat on the United Nations Security Council. It was a great injustice, he told delegates, that “five countries of the UN [get] to decide the whole world’s destiny.”

And this is the part of the Turkish outreach that Western countries find hardest to understand. Many of the grievances of African countries toward the West are opaque to Western diplomats, or seem like a relic of the past. Erdogan has made sure to put these grievances front and center, decrying colonialism when he spoke to the Angolan parliament in October and taking aim at France’s colonial crimes on the continent.

That positioning remains key to the success of Turkey. As with China, Turkish leaders have been able to make inroads into Africa not merely

Ethiopia vows to disarm, punish TPLF to “full force of the law”