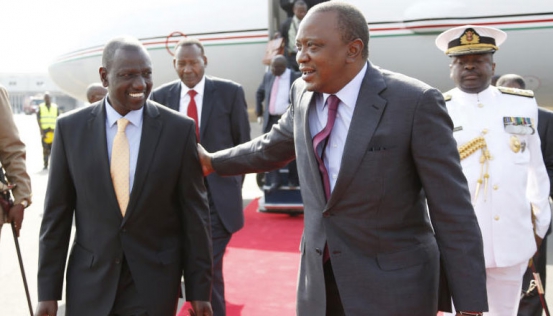 A section of Members of Parliament has revealed a plot to use looming constitutional changes to try to kick out Deputy President William Ruto.

They are also pushing for the formation of a government of national unity should the referendum be successful. These are some of the behind-the-scenes pushes to introduce amendments on the Building Bridges Initiative (BBI) report. The MPs want to give the President a leeway to initiate the removal of his deputy.

If it succeeds, it will hand President Uhuru Kenyatta powers to fire Ruto or any other deputy president. Proponents of the proposal argue there is the need to revisit the constitutional provision that insulates the position of deputy president, making it difficult for the president to sack his principal assistant.  MPs Ben Momanyi (Borabu, Wiper) and Ayub Savula (Lugari, ANC) disclosed the proposal was being canvassed, a development also confirmed by highly-placed sources that could not be named for fear of reprisals.

Momanyi said the country should expect a government of national unity immediately after the referendum, adding that there was a common agreement to address a scenario whereby a president and his deputy are not working in harmony. Powers to sack DP

“We have agreed to address such emerging issues by handing the president powers to sack his deputy. You cannot openly fight your boss,” said Momanyi. “By July we expect to have a government of national unity,” he added. Savula, however, said they will hand the President the powers to recommend sacking of his deputy subject to approval by the MPs. “We want the President to have the powers to recommend the sacking of Deputy President and Prime Minister but it has to be approved by Parliament,” explained Savula. Another source confirmed that the push to hand the President powers to sack his deputy is part of the ongoing consultations.

“It is part of the ongoing discussions and we should expect more from the final document,” said the source.  But Kimilili MP Didmus Barasa, an ally of Ruto, warned such a proposal was informed by selfish short term political schemes and that it would be fought. “That would be a terrible decision because that Deputy President’s position is not permanently for Ruto. You cannot legislate for one person. Will they change the law again if another person occupies the seat? Let them proceed but I don’t think Kenyans will support that and we will fight it as if our lives depend on it,” Barasa said.  Currently, the deputy president can only be removed from office through a rigorous procedure supported by a majority of MPs and only on the basis of physical or mental incapacity to perform the functions of the office or on impeachment for gross violation of the constitution or committing a serious crime.  Fresh details have also emerged how the State plans to use chiefs and their assistants to collect a million signatures to fast-track the popular initiative with plans to have a referendum by July this year.

ODM Chairman John Mbadi said the BBI is a State project, disclosing that chiefs will be enlisted to help collect signatures to fast-track it. “We have said this thing should be concluded so that we can focus on other issues. Going forward we need to have more meetings within a week so that the public engagement phase is complete,” said Mbadi. Asked if it will take time to collect a million signatures required for such an initiative, Mbadi and Momanyi said the government will deploy state machinery to collect the signatures. “This is a government project. It is a presidential task force. Chiefs will be involved.

As ODM we will also help with our machinery,” said Mbadi. To amend the constitution through a popular initiative, a route BBI plans to take, would require the collection of at least one million signatures from registered voters in support of the cause. After verification of signatures by the electoral commission, the Independent Electoral and Boundaries Commission (IEBC) submits the draft Bill to county assemblies. If it garners the support of at least 24 counties it is presented to Parliament and then to a referendum.

A schedule of BBI consultative meetings released yesterday indicates that the team will soon start doing two meetings every week after the Kisii and Bukhungu events. Next Saturday, the meetings spearheaded by ODM leader Raila Odinga will be in Mombasa before moving to Embu/Meru on February 2. And on February 7, there will be a meeting in Wote for Ukambani region before moving to Garissa on February 9. Another consultative meeting has been planned for Eldoret on February 16, just a day before another one in Suswa. The team will then camp in Kiambu on February 25 ahead of a public gathering in Nairobi on the following day. Raila and Siaya Senator James Orengo have insisted that a referendum will take place as early as July this year, as the clock ticks towards the 2022 elections.

Yesterday, Wiper leader Kalonzo Musyoka held a meeting with Ukambani MCAs in Machakos in preparation for the Wote meeting. He is also scheduled to meet the region’s Members of Parliament.  Jubilee Secretary General Raphael Tuju said there was nothing sinister in fast-tracking the process. Tuju said the debates around the BBI has clouded the public and it was just reasonable to dispense with it as soon as possible. “Being a political process there is a need to dispense with it. It is not about having a sinister motive but common sense so that the country is not held in limbo,” said Tuju.

“We need to have a referendum at the earliest possible time so that Kenyans can decide what they want and move on with their lives,” said Junet. Junet, a close ally of Raila, observed that completing the BBI national meetings within the shortest period is a welcome move as it will enable Kenyans from the 47 counties to interact and internalize the BBI report.

Nyeri Town MP Ngunjiri Wambugu, Dan Maanzo (Makueni), nominated MP Godfrey Osotsi and Savula said they expect Parliament to appropriate funds for referendum in the June Supplementary Budget. “There is a feeling that by June everything will be done and the country ready for a referendum. And since Ruto and his allies have been saying they don’t have a problem with the proposals, we expect them to support budget allocation for a referendum,” said Ngunjiri a key member of the Kieleweke camp that is allied to Uhuru. Allocation of funds “They need to support budget allocation so that every Kenyan get an opportunity to interrogate the document and make a decision in a referendum. It would be mischievous of them to oppose the allocation of funds.

Although I know they cannot scuttle it, we expect them to support it,” he added. Maanzo was of a similar view saying that Parliament had to budget for a referendum as he projected it would take place in this year. President Uhuru last week signed a gazette notice that handed the 14-member committee the mandate “to propose statutory or constitutional changes necessary for the implementation of the BBI report”.

Via The Standard Digital