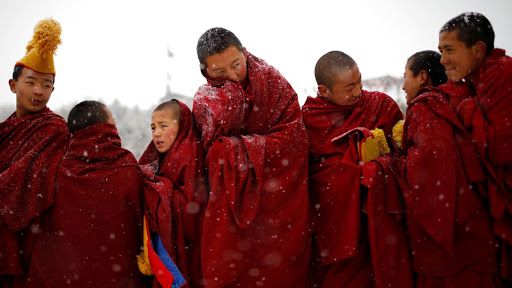 In 2020, the Communist Party of China “trained” and indoctrinated 543,000 “surplus” rural workers in Tibet. The pattern adopted in the Xinjiang “concentration camps” is repeated. Beijing: Nomadic farmers and herders participate on a voluntary basis to find employment. According to many observers, the regime forces them into a context of strict social control.

Beijing (AsiaNews) – Just like in Xinjiang, where the authorities have locked up over one million Muslim Uyghurs in internment camps, the Chinese Communist Party has “re-educated” hundreds of thousands of Tibetan farmers and shepherds. Under the pretext of combating poverty, the regime has transferred nearly 50,000 Tibetan workers within the region, and over 3,000 to other provinces of the country. They are used in road construction, cleaning, mining, catering, transportation and food processing. If they are loyal to the Party, children, wives and senior members of their families will receive the “loving care” of the state. Military discipline used to inculcate patriotism and reform the “backward thinking” of the Buddhist population.  Part II of an analysis by Adrian Zenz, researcher with the Victims of Communism Memorial Foundation. Courtesy of the Jamestown Foundation.

Labor Transfers to Other Provinces in 2020

In 2020, the TAR introduced a related region-wide labor transfer policy that established mechanisms and target quotas for the transfer of trained rural surplus laborers both within (55,000) and without (5,000) the TAR (TAR Human Resources Department, July 17). The terminology is akin to that used in relation to Xinjiang’s labor transfers, employing phrases such as: “supra-regional employment transfer” and “labor export”. Both the 2019-2020 Training and Labor Transfer Action Plan and the TAR’s 13th Five-Year Plan (2016-2020) only mention transfers outside the TAR in passing, without outlining a detailed related policy or the use of terminology akin to that found in related documents from Xinjiang.

Specific examples of such labor transfers identified by the author to other regions within the TAR include job placements in road construction, cleaning, mining, cooking and driving. Transfers to labor placements outside the TAR include employment at the COFCO Group, China’s largest state-owned food-processing company (Hebei News, September 18, 2020).

The central terminology employed for the labor transfer process is identical with language used in Xinjiang: “unified matching, unified organizing, unified management, unified sending off”. Workers are transferred to their destination in a centralized, “group-style”, “point-to-point” fashion. The policy document sets group sizes at 30 persons, divided into subgroups of 10, both to be headed by (sub-)group leaders (TAR Human Resources Department, July 17). In one instance, this transport method was described as “nanny-style point-to-point service” (Chinatibet.net, June 21). As in Xinjiang, these labor transfers to other provinces are arranged and supported through the Mutual Pairing Assistance [or “assist Tibet”] mechanism, albeit not exclusively. The transferred laborers’ “left-behind” children, wives and elderly family members are to receive the state’s “loving care.”

Again, the similarities to Xinjiang’s inter-provincial transfer scheme are significant: unified processing, batch-style transfers, strong government involvement, financial incentives for middlemen and for participating companies, and state-mandated quotas. However, for the TAR’s labor transfer scheme, there is so far no evidence of accompanying cadres or security personnel, of cadres stationed in factories, or of workers being kept in closed, securitized environments at their final work destination. It is possible that the transfer of Tibetan laborers is not as securitized as that of Uyghur workers. There is also currently no evidence of TAR labor training and transfer schemes being linked to extrajudicial internment. The full range of TAR vocational training and job assignment mechanisms can take various forms and has a range of focus groups; not all of them involve centralized transfers or the military-style training and transfer of nomads and farmers.

The Coercive Nature of the Labor Training and Transfer System

Even so, there are clear elements of coercion during recruitment, training and job matching, as well as a centralized and strongly state-administered and supervised transfer process. While some documents assert that the scheme is predicated on voluntary participation, the overall evidence indicates the systemic presence of numerous coercive elements.

As in Xinjiang, TAR government documents make it clear that poverty alleviation is a “battlefield,” with such work to be organized under a military-like “command” structure (TAR Government, October 29, 2019; Xinhua, October 7, 2018). In mid-2019, the battle against poverty in the TAR was said to have “entered the decisive phase,” given the goal to eradicate absolute poverty by the end of 2020 (Tibet.cn, June 11, 2019). Since poverty is measured by income levels, and labor transfer is the primary means to increase incomes—and hence to “lift” people out of poverty—the pressure for local governments to round up poor populations and feed them into the scheme is extremely high.

The Training and Labor Transfer Action Plan cited above establishes strict administrative procedures, and mandates the establishment of dedicated work groups as well as the involvement of top leadership cadres, to “ensure that the target tasks are completed on schedule”. Each administrative level is to pass on the “pressure [to achieve the targets] to the next [lower] level.” Local government units are to “establish a task progress list [and] those who lag behind their work schedule… are to be reported and to be held accountable according to regulations.” The version adopted by the region governed under Shannan City is even more draconian: training and labor transfer achievements are directly weighed in cadres’ annual assessment scores, complemented by a system of “strict rewards and punishments.” Specific threats of “strict rewards and punishments” in relation to achieving labor training and transfer targets are also found elsewhere, such as in official reports from the region governed under Ngari City, which mandate “weekly, monthly and quarterly” reporting mechanisms (TAR Government, December 18, 2018).

As with the Uyghurs in Xinjiang, overcoming Tibetans’ resistance to labor transfer is an integral part of the entire mechanism. Documents state that the “strict military-style management” of the vocational training process causes the “masses to comply with discipline,” “continuously strengthens their patriotic awareness,” and reforms their “backward thinking.” This may also involve the presence of local cadres to “make the training discipline stricter.”

Because the military-style vocational training process produces discipline and transforms “backward employment views,” it is said to “promote labor transfer.” Rural laborers are to be transformed from “[being] unwilling to move” to becoming willing to participate, a process that requires “diluting the negative influence of religion,” which is said to induce passivity (TAR Commerce Department, June 10). The poverty alleviation and training process is therefore coupled with an all-out propaganda effort that aims to use “thought education” to “educate and guide the unemployed to change their closed, conservative and traditional employment mindset” (Tibet’s Chamdo, July 8, 2016). One document notes that the poverty alleviation and labor transfer process is part of an effort to “stop raising up lazy people” (TAR Government, December 18, 2018).

A 2018 account from Chamdo of post-training follow-up shows the tight procedures employed by the authorities:

Strictly follow up and ask for effectiveness. Before the end of each training course, trainees are required to fill in the “Employment Willingness Questionnaire.” Establish a database…to grasp the employment…status of trainees after the training. For those who cannot be employed in time after training, follow up and visit regularly, and actively recommend employment….

These “strict” follow-up procedures are increasingly unnecessary, because the mandated “order-oriented” process means that locals are matched with future jobs prior to the training.