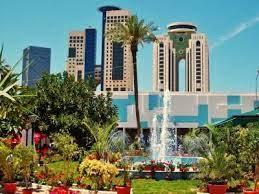 Armed groups in the Libyan capital Tripoli on late Friday stormed a hotel used as a headquarters by the country’s new presidential council, DW reported.

Unverified images on social media showed armed, uniformed men standing at the entrance to the Corinthia Hotel in the heart of the city. Local press labeled them militias.

Presidential council spokeswoman Najwa Wahiba confirmed that armed men had stormed “one of the headquarters where the council meets.”

She said nobody from the council was in the building at the time as the body does not work on Fridays, the weekly day of rest in Libya.

However, a senior official at the presidency council later denied that the groups had been armed, or used force.

“There was no kidnapping, gunfire, or an attack on me or the hotel,” the head of the presidency council’s office, Mohamed al-Mabrouk said in a social media video, adding that he had been in the hotel at the time of the incident.