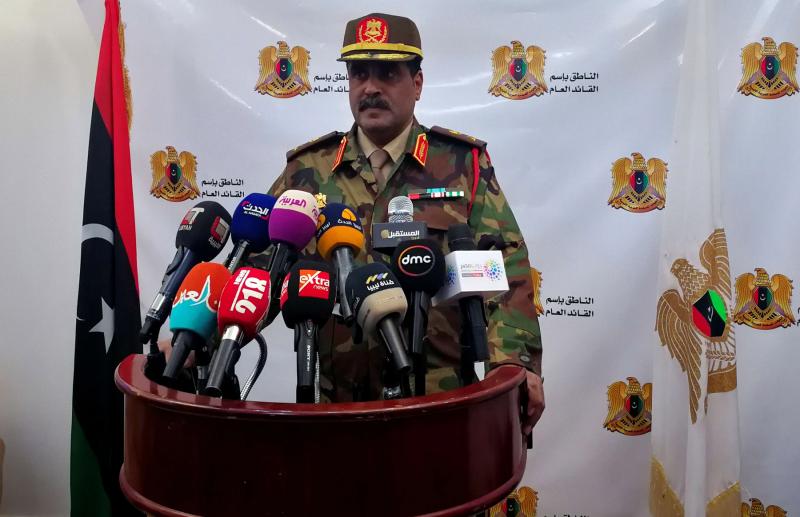 A spokesman for the Libyan National Army, Ahmed al-Mismari, announces the seizure of the city of Sirte. Photograph: Abdullah Doma/AFP via Getty Images

The nine-month assault on the UN-backed Libyan government has moved closer to a bloody climax, with the Tripoli administration reeling from the loss of key coastal territory to rebel forces, and a lack of international condemnation of a drone strike that massacred 30 of its military cadets.

Russia and the United Arab Emirates were continuing to pour arms into the country in support of the Libyan National Army rebel forces, led by Gen Khalifa Haftar.

The main European countries involved in Libya – France, Germany, Italy and the UK – are meeting in Brussels to discuss the crisis in an emergency session but have so far been incapable of an effective intervention to bring the warring sides together. Italy especially is determined that Libya should not slip off Europe’s agenda due to the attention devoted to the Iran crisis.

Fears that the UN-backed Government of National Accord, led by the prime minister, Fayez al-Sarraj, might be overrun militarily have led to a controversial Turkish promise to save the government from collapse by sending Turkish troops. The troops are being sent not to fight but to ensure a ceasefire, Ankara claims.

Haftar is primarily backed by the UAE, which regards the GNA government as under the control of Islamist militia. 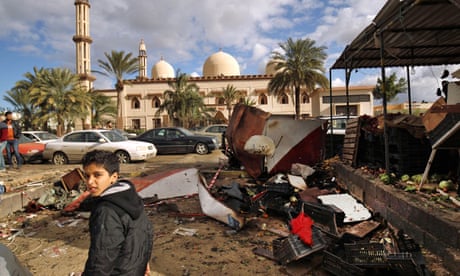 On Monday, the important coastal city of Sirte fell to the LNA in less than three hours, prompting suggestions that the neighbouring city of Misrata, critical to the Tripoli government’s survival, will fall next. Sirte had been held by GNA forces since 2016 and a counter-offensive is promised. Ironically, given the UAE’s opposition to Islamist forces, Sirte fell at such speed partly because the Salafist Madkhali 604th brigade switched sides to back the LNA. The LNA forces moved west from Sirte towards Misrata after its victory on Monday.

The Turkish president, Recep Tayyip Erdoğan, is due to meet the Russian president, Vladimir Putin, in Ankara on Wednesday, and although the two leaders are backing different sides in the civil war, it is possible they could reach an accommodation. If this happens, Europe faces the prospect of being carved out of any settlement, as it is in Syria by Turkey, Iran and Russia.

The UN envoy for Libya, Ghassan Salamé, spoke with UN security council diplomats in New York behind closed doors on Monday and later, in a passionate briefing to reporters, attacked the “prima donnas” on both sides of the civil war for refusing to reach a political agreement.

Without naming the UAE, he said: “Dozens of cadets have been killed in the military academy unarmed, entirely unarmed, by a drone attack that is probably done by a country supporting the LNA.” Videos of the attack, showing the soldiers falling underneath the drone strike, have emerged on the internet

The UAE has made no comment on the allegations, and Salamé stressed that more than one country was supporting the LNA.

… we have a small favour to ask. More people, like you, are reading and supporting the Guardian’s independent, investigative journalism than ever before. And unlike many news organisations, we made the choice to keep our reporting open for all, regardless of where they live or what they can afford to pay.

The Guardian will engage with the most critical issues of our time – from the escalating climate catastrophe to widespread inequality to the influence of big tech on our lives. At a time when factual information is a necessity, we believe that each of us, around the world, deserves access to accurate reporting with integrity at its heart.

Our editorial independence means we set our own agenda and voice our own opinions. Guardian journalism is free from commercial and political bias and not influenced by billionaire owners or shareholders. This means we can give a voice to those less heard, explore where others turn away, and rigorously challenge those in power.

Between East Africa and the Gulf

Ethiopia says army left Mekelle to deal with other threats