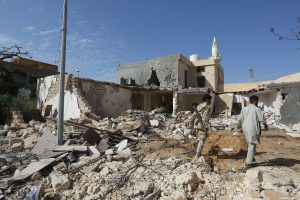 ( Aview of a house hit by air strikes carried out by Haftar’s forces in Tripoli Libya.)
Libya’s High Council of State on Sunday accused the Arab League of issuing statements and decisions that “depend on the calculations and agenda of certain Arab countries, namely Egypt and the United Arab Emirates,” which are working to “destabilise the situation in Libya”.

The accusation came in a statement following the ministerial meeting of the League of Arab States, which discussed, on Saturday, Turkey’s new military deployment in Syria named “Operation Peace Spring”.

Libya rejected a request to reduce diplomatic ties with Ankara as a result of its military endeavour.

The High Council of State expressed “its surprise and objection to the double standards applied by the Arab League in defending the sovereignty of member states.”

“It is clear and obvious to us that the decisions and statements of the Arab League are subjected to the accounts and agenda of certain Arab countries,” mentioning Egypt and the UAE in particular.

The statement explained that these countries are “attempting to destabilise the situation in Libya and threaten its territorial integrity, while working to tear the Libyan social fabric, which contradicts the Charter of the League in its 2nd and 8th articles.”

Libya accused Egypt and the United Arab Emirates of supporting the commander of Libyan forces in the east, retired Field Marshal Khalifa Haftar, who is fighting the internationally recognised Government of National Accord (GNA), while both Cairo and Abu Dhabi denied such accusations.

“We remind these countries, which claim to be concerned for the Arab worlds’ national security, and their fear of the spread of terrorism, that their planes are launching daily raids on civilians and bombing the headquarters of the legitimate government, which fought terrorism in the city of Sirte based on no religious, legal or moral obligation.”

The statement continued: “We remind the Arab League that these countries are standing in the way of holding a session of the council of the League to take resolute measures supporting legitimacy in Libya and protecting civilians from the blatant aggression backed by these countries, which are taking part and endorsing the offensive.”

Since 2011, Libya, the oil-rich country, has been plagued by a struggle for legitimacy and power, currently centred between Haftar and the internationally recognised GNA.

On 4 April, Haftar’s forces launched an offensive to take control of the capital Tripoli, where the GNA is located, ending efforts by the United Nations to hold dialogue in the hope of coming to a political solution to the conflict.