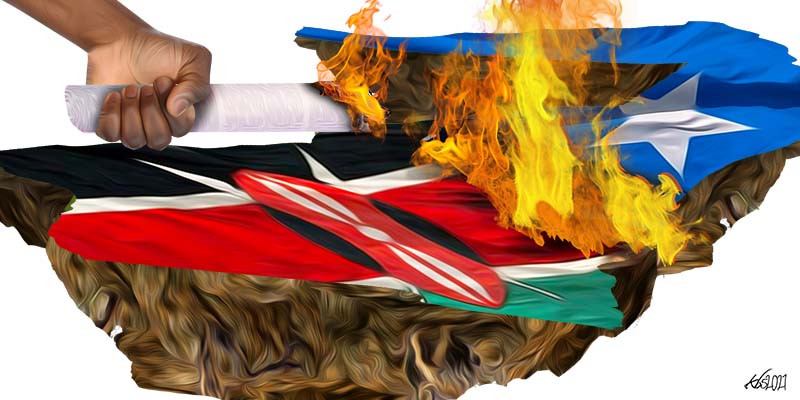 Ten years ago this month Kenyan troops invaded Somalia. Coverage of the incursion by the Kenyan media has consistently and uncritically favoured the Kenya Defence Forces.

October 11, 2021
By Osman Osman
Precisely ten years ago, Kenyans woke up to the news that about 2,000 troops of the Kenya Defence Forces (KDF) had been deployed to fight al-Shabaab, the Somalia-based terror group.
In an invasion dubbed Operation Linda Nchi, the troops made their way into southern Somalia through the semi-arid porous border that divides the two neighbouring nations. The deployment followed news reports that al-Shabaab was behind abductions targeting aid workers in northern Kenya and tourists along Kenya’s coast.
But while there is no shortage of reports on the hidden reasons behind this decision, analysis of how the Kenyan press has constructed the narratives about the conflict for its audiences is limited. Scholars and analysts have scrambled to put forth solid analyses of the dynamics of the Kenyan elites, al-Shabaab, and other actors involved in Somalia yet few have attempted to address the question of how the Kenyan mass media mediates this war.
Further, researchers have undertaken the essential task of informing us how media outlets in the global north cover wars involving troops from their countries’ perspectives. However, analysis on how invasions in countries like Somalia are mediated by news media organizations from invading countries like Kenya remains minimal.

Wars and the news media

The intersection of news media and conflict is complex. There is consensus in the existing academic research that journalists throw away their professional hats when covering wars involving their home countries. This is explained by the fact that they are guided by military elites who control the information coming in from the frontline. The shared cultures and ideologies with soldiers on the battlefield render journalists sympathetic to their governments’ interests. In short, they remain patriotic and loyal.
As primary agenda setters, the news media remains a powerful force. In Kenya, the existing digital divide reminds us that the traditional press still dominates the dissemination of information across the country. This requires that we explore what shapes the decisions of Nairobi-based editors when bringing the war in Somalia to Kenyan living rooms.
The KDF has participated in numerous peacekeeping missions across the world since its inception. From the Bosnian war in the 90s to the Sierra Leone civil war that ended in the early 2000s and Sudan’s Darfur conflict, the Kenyan government has generously contributed its military troops to UN-led peacekeeping missions. These missions largely go uncovered by the Kenyan press since the country is effectively not at war, and also because distance discourages editors from spending resources on these countries.
However, the October 2011 decision to invade Somalia, a country that shares a border with Kenya, was unprecedented. The unilateral decision by former President Mwai Kibaki’s government opened a decade of countless terror attacks across the country. And for the first time, Kenyan journalists were covering a war in which their own country was prominently involved.
Undoubtedly, Kenya’s hasty decision to invade Somalia cemented al-Shabaab’s prominence as one of the deadliest terror groups in the continent. Helped by Kenya’s weak security system which was a result of rampant corruption and limited resources, al-Shabaab executed some of its worst attacks in the country.

The unilateral decision by former President Mwai Kibaki’s government opened a decade of countless terror attacks across the country.

The group was behind the killing of over 4,000 people across East Africa in 2016 alone. The Garissa University terror incident in early 2015 that led to the deaths of 147 students and staff remains the deadliest attack by the group in Kenya. Inside Somalia, the group was behind the January 2016 massacre in El Adde and the 2017 attacks in Kulbiyow that resulted in the deaths of hundreds of KDF personnel. Thus, the Kenyan mass media found itself covering a war that was killing military personnel in Somalia and Kenyan citizens across the country.

KDF and the media

It is almost impossible not to think about patriotism when discussing the intersection of the Kenyan mass media and the country’s military institutions. Even before its invasion of Somalia, the KDF consistently enjoyed favourable media coverage and, with the exception of the people of northern Kenya who carry the scars of attacks such as the Wagalla massacre perpetrated in Wajir in 1984, Kenyans’ perception of the KDF was positive.
The Kenyan media’s uncritical treatment of the KDF when the invasion commenced was therefore not surprising. Kenyan journalists share cultures and ideologies with the troops and this creates a bias in how they view this war.
We have often seen how citizens of African countries—with Kenyans leading by example—react to Western media misrepresentations of their stories. From #SomeoneTellCNN to #SomeoneTellNewYorkTimes, Kenyans have taken to social media platforms like Twitter to vociferously criticise how the Western press covers terror in their country. And while pushback against misrepresentations and negative portrayals by foreign media is necessary, it is equally important to question how our own news media portrays war and terror in Somalia.
It is common knowledge that US reporters tend to interpret foreign news with American audiences in mind. But this is not only true of Western reporters; journalists across the globe tend to behave this way when they cross their borders to report on a war led by or involving their own country.
Kenyan news media gatekeepers <> through the lens of nationalism when reporting conflict across the border and within the country. Moreover, whether it be the shifta war, the atrocities in Somalia, the Somali refugees in the Dadaab camp, the Kenyan mass media places Somalia and northern Kenya within the same frame, and the published stories are perceived as synonymous with Kenya’s policy in Somalia. Kenyan reporters write these stories with Kenya in mind, creating the ideal environment that enables Kenyan citizens to accept and approve of the conflict.
After conducting a content analysis of how the Daily Nation and Standard newspapers have covered the war, Cliff Ooga and Samuel Siringi conclude that the Kenyan press has “relied a lot on the news from government agencies instead of residents and eyewitnesses accounts of the combat in Somalia.” This cements the argument that the sources used in covering the conflict frame the KDF as the winning side and shape a favourable public opinion that approves the mission.
My findings of an analysis of over 200 articles in Kenyan and US newspapers about the 2013 Westgate Mall attack were consistent with those of scholars who had examined other attacks such as the Garissa University and Dusit Hotel terror attacks. More than 70 per cent of the sampled articles received episodic framing, meaning they were covered as a single event.
This type of framing doesn’t inform the audience about why these attacks are occurring. It lacks in-depth analysis, nuance, and thematic demonstrations of how Kenya found itself in the conflict. Tellingly, these findings were synonymous with how American newspapers covered the same attacks.

The primary reason behind the Kenyan news media’s uncritical reportage of the war in Somalia is embedded journalism. This type of journalism occurs when reporters are invited and attached to military personnel in the battleground to cover conflicts. This approach defeats critical journalistic values—fairness, neutrality, and impartiality are replaced by patriotism, loyalty and empathy. The value of ethical journalism and independence on the battlefields is lost since military personal provide security to these reporters.
Moreover, the military covers the journalists’ costs and sets the ideal timing for combat. The location of the coverage, how and who is interviewed, these are strategically structured so as to portray Kenya as winning the war, a classic example of public relations through the mass media. Kenyans are presented with news coming in from the battlefield wrapped in such headlines as KDF, No Retreat, No Surrender in Somalia Operation, and The Frontline: KDF Continues to Combat al-Shabaab in Somalia.
The concept of embedded journalism flourished in the 2003 Iraq war. The US military was eager to control information coming out of the oil-rich country. The use of this tactic by American military elites was motivated by the embarrassment it experienced in the Vietnam War, often referred to as the “first television war”. The advent of television technology took journalists to the frontline, a perilous yet enticing undertaking that brought with it recognition among their peers and prestigious prizes that acknowledged their prominence in the realm of journalism.

The primary reason behind the Kenyan news media’s uncritical reportage of the war in Somalia is embedded journalism.

With unrestricted coverage, positive reportage of the Vietnam War soon turned to critical reporting that portrayed the government in a bad light. With journalists having free access to the affected communities, bloody images of innocent victims of the war found their way onto television screens in American living rooms. The footage contradicted “the official war narrative and undermined public support for the war effort” and calls by anti-war activists for the American government to end the war in Vietnam escalated. This is why military elites in Washington DC view the unfettered access of news media to the frontline as a threat that needs to be contained.
In 2003, embedded journalism played a significant role in advancing the interests of the US in the Middle East and beyond. Reporters were given protection by the military in cities across Iraq. This is little more than tourism on the battlefield, where the troops are the tour guides who control journalists during the adventure that is war coverage.
Imitating the West, the KDF employed this tool to deal with the news media. Coverage of Kenya’s invasion of Somalia is Kenyan-centric, with sources comprising of military personal and the personal views of the journalists. Somalis are completely disregarded and the few who are interviewed are beneficiaries of KDF-driven humanitarian efforts such as free medical camps and distribution of foodstuff.
A culture change is needed
How can the Kenyan news media change this culture of violating journalistic values? Can Kenyan journalists redeem themselves by giving us a clear picture of the KDF’s engagement in Somalia?
These questions need immediate attention as we enter the second decade of Kenyan military activity in Somalia. We have witnessed how the lack of critical coverage of war and terror in countries like Somalia, Afghanistan, Iraq, and elsewhere has derailed efforts towards finding durable solutions to end these wars.
Kenyan journalists need to acknowledge that their coverage of Kenya’s incursion into Somalia has uncritically embraced the government’s position and that Kenyans have not been given an accurate picture of the ongoing conflict. Their editors, the decision-makers in the newsroom, should strive to allocate resources for journalists to be deployed independently to cover this conflict. This essential element in the news production process is key to a fair, impartial, and critical coverage of Kenya’s engagement in Somalia.

This is tourism on the battlefield and the troops are the tour guides who control journalists during the adventure that is war coverage.

Journalists covering these stories should strive to reach out to different sources. Including the voices of those in the local communities who face the wrath of both the KDF and al-Shabaab would be a bold step towards constructing clear narratives for citizens in Kenya and elsewhere.
Newsrooms should also hire full-time, Somali-based journalists to cover the conflict; deploying journalists from Nairobi who lack contextual knowledge will make it difficult to produce fair and impartial reporting. Perhaps engaging properly remunerated local correspondents would address some of the challenges of the last ten years.

When news of the invasion was announced a decade ago, elites in Nairobi were quick to promise that it would be a short war. However, our troops are still “fighting terror” that has killed thousands of Kenyans inside and outside Somalia. It is conceivable that critical news coverage of this war by the Kenyan mass media would lead to the long-overdue exodus of KDF from Somalia.

First posted at The Elephant