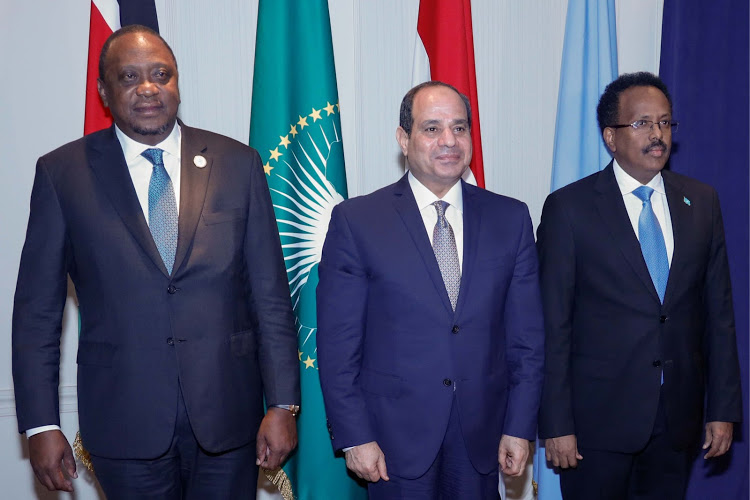 On August 28, 2014, Somalia wrote to the International Court of Justice in an application to institute proceedings against Kenya with regard to “a dispute concerning maritime delimitation in the Indian Ocean”.

In its application, which was accompanied by three sketch-maps, Somalia contended that both States “disagree about the location of the maritime boundary in the area where their maritime entitlements overlap”.

It also told the ICJ that “diplomatic negotiations, in which their respective views have been fully exchanged, have failed to resolve this disagreement”.

When Egyptian President Fattah el-Sisi brokered a meeting between Uhuru Kenyatta and Mohamed ‘Farmaajo’ Abdullahi, Kenya was hopeful that a deal was finally in the offing.

The meeting on the sidelines of the United Nations General Assembly was aimed at getting Kenya and Somalia to negotiate, among other things, the ongoing maritime dispute.

So hopeful was Uhuru that he told the UN that Kenya was encouraged by the attempt to have an amicable negotiated solution to the dispute.

“My administration continues to reach out to Somalia in an effort to find an amicable and sustainable solution to the maritime boundary dispute between us,” Uhuru said in his address to the assembly.

This hope was however short-lived after the committee of the two countries made no headway following hours of meetings and Farmaajo reported to the UN the following day that the talks had collapsed.

“El-Sisi failed partly because Farmajo had little time for diplomatic niceties as he awaits the International Court of Justice (ICJ) to rule in his favour. Kenya, on its part, worries about the possibility of an international cartel using the ICJ as a tool of sea grabbing,” international relations don Macharia Munene wrote recently.

The developments at the UN left Kenya in a diplomatic dilemma as the time for the hearing of the case at the ICJ fast approaches.

Kenya is currently putting together a new legal team after the ICJ agreed to its request for a two-month postponement though the request was for 12 months.

There has been no official update on this, but the Star has learnt that the announcement on the new counsel will only come close to the November 4 hearing date.

However, sources within the government have revealed to the Star that Kenya is still hoping for a window to negotiate its way out of the case.

Kenya has previously hinted at not trusting the ICJ, accusing its northern neighbour of ignoring local and continental mechanisms to resolve the dispute.

September 19, 2016, was the first time that Kenya appeared before the ICJ and the position then was and still remains that the Court was not competent to decide the maritime dispute.

Kenya has always maintained its position that it did not consent to the Court’s jurisdiction over disputes where it had agreed to other methods of settlement, including the April 7, 2009 MoU.

The 2009 MoU had set out the agreed procedure for settlements of the dispute between the two countries, but Somalia opted to present the case to the ICJ.

Kenya has however insisted that this ought not to be seen as a retreat from its respect for international law.

Kenya has also insisted that it has dealt with Somalia in good faith, including but not limited to hosting Somali refugees as well as helping the Horn of Africa country deal with al Shabaab.

“Contrary to Somalia’s assertion, Kenya has exercised uncontested jurisdiction in the maritime area since it proclaimed its Exclusive Economic Zone (EEZ) in 1979. The EEZ boundary is an extension of the territorial sea boundary inherited from colonial practice and embraced under the Africa Union Border Program that Somalia and Kenya have been members,” an internal write-up by the government seen by the Star says.

The document adds that prior to the onset of the maritime dispute, Kenya took to transitory exploratory activities within her maritime territory but has since suspended these to allow for an amicable solution.

“However, Kenya faces real security threat due to al Shabaab weapons smuggling and infiltration at sea,” it adds.

This, the document explains, has resulted in Kenya exercising its liberty to secure and defend its territory while extending assistance to Somalia, which currently has no maritime enforcement capacity.

“The Kenyan Navy endorsed by the UNSC incurs significant costs in patrolling this maritime area and will continue to do so,” the document says.

Despite the 2009 MoU giving mechanisms that would have helped Kenya and Somalia deal with the current dispute, only two technical meetings happened between the two countries before the matter got to the ICJ.

It took two days after the aborted second meeting for Somalia to submit its application to the ICJ in 2014, something that Kenya has insisted shows its neighbour was never committed to negotiations.

Kenya has also accused Somalia of trying to sell the blocks within the disputed region following tenders published on February 7, 2019.

In its timetable released in London, Somalia listed August 29, 2019, as the final date for the Ministry of Petroleum to qualify operators and non-operators of the oil blocks.

October 17, 2019, was recorded as the final date for registering a consortium and January 1, 2020, is listed as the effective date of the Production sharing agreement.

(Original article appeared in The Star)