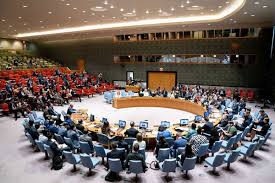 Kenya has raised a complaint about Djibouti’s  campaigns for the non-permanent member of the UN Security Council seat, in the wake of failure to have Nairobi’s endorsement by the African Union reversed.

Both countries have been seeking the seat, whose election is due in June at the UN headquarters in New York.

But Nairobi, which was endorsed by the African Union in 2019 is complaining that Djibouti is engaging in underhand acts in an attempt to overturn Kenya’s approval.

On Friday, Kenya’s Foreign Affairs Ministry said Djiboutians were campaigning  were in fact disrespecting the African Union by talking ill of the continental body’s decisions.

“Contrary to the false impression that was being created prior to the 33rd Ordinary Session of the African Union Assembly, this endorsement was final and not subject to review,” Kenya said, arguing the AU had “unequivocally affirmed the decision to endorse Kenya.”

“Kenya considers this matter no longer solely about the candidature but about the values and principles we have all chosen to abide by. Kenya therefore distances itself from any campaign that brings dishonorr and disrepute to the African Union and any of its member states.”

The matter arose from a public statement by Djibouti last week, after the African Union Summit in Addis Ababa.

Djibouti said it had “successfully” challenged the validity of Kenya’s endorsement and told the public it had ensured the African Union Executive Council did not approve the actual vote of the Permanent Representatives, the ambassadors of member states who actually voted.

“Djibouti convincingly and successfully challenged the PRC recommendation by citing numerous violations of rules and procedures and arguing Djibouti ought to be the African Group’s and African Union’s sole candidate,” a statement from Djibouti’s Presidency stated on Thursday.

Djibouti said it was calling on member states to support its candidature against Kenya’s, whose endorsement it argued was illegitimate, even though the Horn of Africa country agreed to take part in the vote last year.

But Nairobi said Djibouti was referring to fictitious developments at the AU Assembly.

In fact, Nairobi argued, the matter was never put to the agenda and Djibouti was unable to raise it during the closed-door session of the Assembly of Heads of State and Government.

Amid the contention, the Permanent Representatives Committee (PRC), a group of ambassadors from AU member states, wrote to the Africa Group in New York, advising that Kenya had been endorsed.

The PRC, then chaired by Egyptian diplomat and Ambassador to the AU Osama Abdelkhalek, wrote to the AU Observer Mission to the UN in New York, informing it of the vote results.

The mission would later circulate a note to African diplomats accredited to the UN in New York, known as the Africa Group.

Djibouti , which had earlier conceded defeat, wrote formally to the African Union in December declaring that it was the ‘African’ candidate for the UN Security Council.

The Nation has seen correspondence between the African Union and the African diplomatic corps in New York, in which the continental body advised the decision had been reached to endorse Kenya.

The African Union later followed with a legal opinion, which advised that the decision by the PRC had been final as the Executive Council had duly delegated the powers to nominate the candidate to the Committee.

But at the AU summit, Djiboutian Foreign Minister Mahmoud Ali Youssouf had written to the AU asking for the Executive Council to “reconsider” endorsement of Kenya.

The summit ended without altering the endorsement, meaning Kenya was retained as the sole candidate for Africa.

Djibouti, however, rescinded its earlier concession and argued there should have been rotation, instead of the vote.

The African Union does not have a vote at the UN General Assembly for members of the UNSC.

But since 2007, it has routinely worked under a common resolution to nominate its member states to international bodies to present a common position.

Often, the AU nominates through consensus or a vote, especially when contenders refuse to give way for each other.

Djibouti’s argument was that there should not have been a vote, which it took part in twice.

Instead, it argues Kenya should have relinquished the contest as it has served in the UNSC more times.

Previously, Djibouti’s officials argued the African Union Executive Council had not approved the vote, something Nairobi insisted was false since ambassadors accredited to the AU, and known as Permanent Representatives, had voted and the result duly communicated to the relevant organs.

Kenya’s Foreign Affairs Cabinet Secretary Raychelle Omamo, who was leading the Kenyan delegation, noted “the need to protect the integrity of the union and fidelity to its procedures,” referring to AU’s decisive vote last August.

Legally speaking, Djibouti could still enter a parallel run for the seat since the African Union endorsement is not sufficient for a candidate to win the seat.

But officials in Kenya argue that allowing the country to continue with the race could in future kill this tradition and that it “effectively threatens the fidelity and undermines the integrity of the continent’s agreed processes and outcomes”.

The UN Security Council has five permanent members (P-5) with powers to veto substantive decisions. They are France, China, UK, US and Russia.

It also has ten non-permanent members, known as E-10.

While the P-5 holds the clout over matters around the world, experts say their fractured relations and the continual disagreement on issues means the E-10 have become equally influential.

The article originally appeared in the Daily Nation
previous post