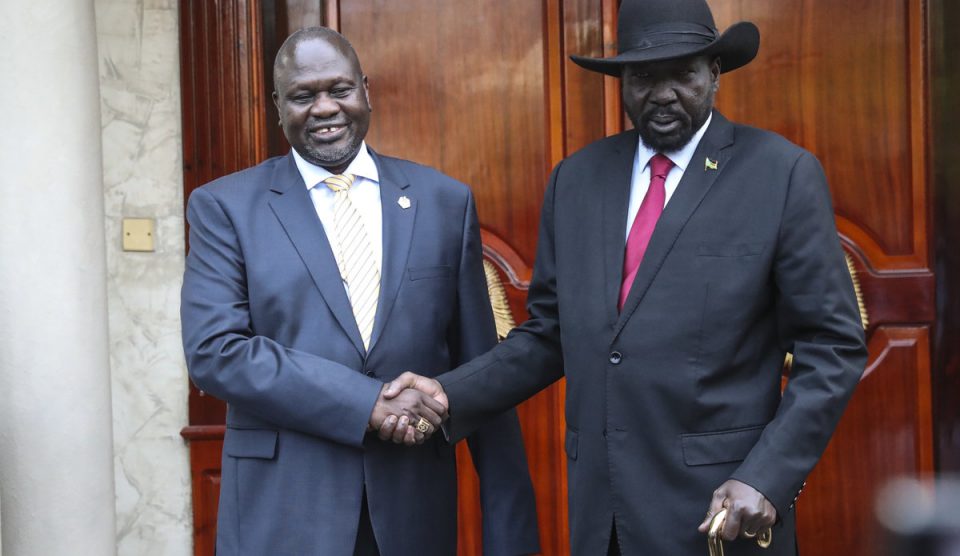 The US government’s withdrawal of its envoy to South Sudan has stoked anger among President Salva Kiir’s close associates, even as the Opposition appeared to back Washington’s hard-line stance on Juba.

The US on Monday recalled its ambassador in South Sudan, Thomas Hushek, sending a strong signal that it did not support the decision to allow more time for the country’s political protagonists to form a unity government.

But as Juba screamed victim this week, the Opposition said it did not feel the negotiations with President Kiir’s government were progressing at the right pace even as the clock ticks towards the 100 days deadline.

Details also emerged that the government in Juba was recruiting new soldiers in what could have violated ceasefire agreements and potentially damaged the possibility of merging forces into one national army, under the planned unity government.

Washington said it was withdrawing Mr Hushek as Ambassador to South Sudan for “consultations,” having become frustrated with the failure by President Salva Kiir and former VP and Opposition Leader Riek Machar, to start an administration.

US calls back envoy from South Sudan

US Secretary of State Mike Pompeo had torn into President Kiir, questioning his political will and said they were calling back their envoy to “re-evaluate” their relationship with Juba.

“We will work with the region to support efforts to achieve peace and a successful political transition in South Sudan,” Mr Pompeo said.

But the decision by the US, one of the group of donor countries behind mediation efforts known as the Troika to recall their envoy was seen in Juba as a bid to force the hand of Mr Kiir to give in to some unspecified demands.

Mr Kiir’s diplomats were this week fighting back claims that he is a stumbling block to formation of a transitional government.

Instead, they asserted that their principal was being ‘victimised’ for compromising.

“The President has never asked for an extension of the pre-transitional period,” argued South Sudan’s Foreign Affairs Minister Awut Deng Achuil, referring to the time allowed to form the transitional government of national unity.

Kiir, Machar and several other parties signed the Revitalised Agreement on the Resolution of Conflict in South Sudan (R-ARCSS) on September 12, 2018. They were to form the unity government six months later. They failed and extended by another six months.

As the deadline approached on November 12, Ugandan President Yoweri Museveni brokered another deal to extend the period by another 100 days.

“His excellency welcomed the decision of the regional guarantors for extension as a compromise measure to avert a return to conflict and maintain peace in the country,” Ms Achuil said this week.

Every other party, including mediators at the Intergovernmental Authority on Development (Igad) endorsed the extension with a caveat: That the parties must now list down specific actions to ensure the 100 days lead to a new unity government.

Dr Machar’s group, the Sudan People’s Liberation Movement-In Opposition, in an interview said Juba had not given specific guarantees to the international community on implementation of the agreement required for formation of a unity government even after signing of the deal to extend the pre-transition by 100 days.

“Washington is unhappy with the way things are happening in South Sudan,” said James Oryema, Dr Machar’s Spokesman in Kenya.

“There was consensus in Entebbe but Washington is worried we cannot work together (with President Kiir) as things stand.”

With the US decision, Juba says it means Washington is not keen on a peace deal but paves the way for external aggressors.

“The US has never been a friend of South Sudan. There are big politics in play and South Sudan is just a victim of a giant,” said James P. Morgan, South Sudan’s envoy to the African Union, without elaborating.

“Two guarantors (Uganda and Sudan) came up with a middle ground which was to provide 100 days. But the US was not happy with that.
“The US acted dubiously by supporting the formation of a revitalised transitional government and yet it also supported the position of Dr Machar,” he added, referring to the initial demand by the opposition groups for six more months.

A UN Panel of Experts on South Sudan this week charged that Juba had recruited about 10,000 new soldiers during the transitional period, despite the R-ARCSS requiring that certain measures be taken to retrain, canton and merge forces first. The forces, the Panel claimed, were being hosted in the former Warrap State.

The US, which had warned before of re-evaluating relations with South Sudan, has also imposed sanctions on certain South Sudanese warlords, seen to have violated ceasefire agreements.

Some of the individuals were still working for President Kiir and had even travelled abroad on assignments despite various US and UN sanctions.

In a UN report, South Sudan Army chief Gabriel Jok Riak, who was sanctioned and banned from travelling abroad, had in fact attended a military sports event in Nairobi in August, without a formal request for exemption.

Another former military chief, Gen Paul Malong, who has been banned from travelling, was also spotted in Johannesburg in July, travelling on a Ugandan diplomatic passport.

He travelled back to Nairobi using the same document, according to the Panel. Gen Malong, once Kiir’s Chief of General Staff, formed his own rebel group and refused to sign the peace deal.

The US warned that it will impose more sanctions on others like Gen Malong and another rebel called Thomas Cirillo, who also runs a different group that refuses to join the peace deal.

But South Sudan’s neighbours came in for criticism for aiding the flop in sanctions.

The Panel says in its interim report that there is lack of political will among key protagonists to implement the peace agreement known as R-ARCSS.

But they charge that President Kiir is specifically profiting from the region’s reluctance to enforce sanctions imposed on warlords. Kenya, Uganda and Ethiopia are particularly seen as partial players in the conflict.

“The selective implementation of and inconsistent international support for the Agreement have led to a dangerous stalemate,” it says about refugees, hunger and lawlessness.

“Over the past year, the Intergovernmental Authority on Development and Member States neighbouring South Sudan, specifically Ethiopia, Kenya, the Sudan and Uganda, have not demonstrated full and consistent engagement in the peace process. The Government, in particular, has benefited from the inconsistent approach of the region.”

Ethiopia, the Chair of Igad until Friday’s Sudan takeover, and Kenya, have only given piecemeal support, with occasional visits or bilateral meetings.

Both countries have refuted the charge, separately indicating they have in fact borne the brunt of violence in South Sudan.