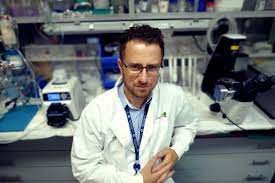 There have been many attempts to implant animal organs in humans, however there have been very acute rejections. Dr. Shahar Cohen of Beilinson Hospital thinks that this time it will be different.

By MAAYAN JAFFE-HOFFMAN
APRIL 7, 2021 21:03
A team of Israeli researchers have developed a hybrid organ – an organ from a pig with “human” blood vessels – that they believe could help alleviate the shortage of transplant organs.
There have been many attempts to implant animal organs in humans but this has largely been unsuccessful, mostly due to acute rejections, explained Dr. Shahar Cohen of Beilinson Hospital, whose team developed the hybrid organ.
The main trigger of an organ rejection is the internal lining of its blood vessels, he said. This coating is the point of contact between the transplanted organ and the recipient’s body.
“We looked for a way to produce an alternative coating that does not cause rejection,” Cohen told The Jerusalem Post.
The solution: Cohen’s team removed the coating from the pigs’ blood vessels and replaced it with a more “friendly” coating to the human immune system that was engineered in the laboratory from human placenta cells, which, as far as is known, do not trigger rejection.
“Instead of destroying the whole organ, we target only part of the organ – the most important part,” Cohen elaborated.
“We remove the pig’s internal layer of blood vessels and replace it with a ‘human layer,’ thereby humanizing the blood vessels of the organ and generating a hybrid organ – a pig organ with humanized blood vessels. This is the way to surmount the barrier to pig organs in humans.”
He said the team chose to use placenta cells because the placenta is the “ideal organ that connects two human beings and plays a key role in maintaining the connection between mother and fetus.”
The method has been successfully tried so far in a number of organs: heart, lungs, liver, kidney, pancreas and limbs, Cohen said. The experiments until now were ex-vivo, outside the body.
The results of the team’s work was published this week in the prestigious peer-reviewed “Scientific Reports” published by Nature Research.
Next, he said, the researchers plan to perform their first hybrid organ transplants in animals and in about five years Cohen hopes that the first human transplant can be performed.
The shortage of organs available for transplantation is a chronic problem globally. For the last few decades, there has been no major breakthrough in increasing supply and the number of people on waiting lists is high and ever-expanding. According to the organization Donate Life, some 8,000 Americans die each year waiting for a transplant.
“We believe that our approach will make this reality sooner than later,” Cohen told the Post. “Our goal is to change the world and change the face of modern transplantation medicine.”
He said, “We want to eliminate the waiting list and have an unlimited supply of organs available for transplantation, and a future with less anti-rejection drugs in humans so they have less side-effects and fewer problems related to immune suppression.
“We have a clear path understanding how to reach this milestone,” Cohen continued. “I think we will be able to reach this vision.”
Jerusalem Post
previous post

‘Death to Khamenei’: Protests erupt in Iran over power outages