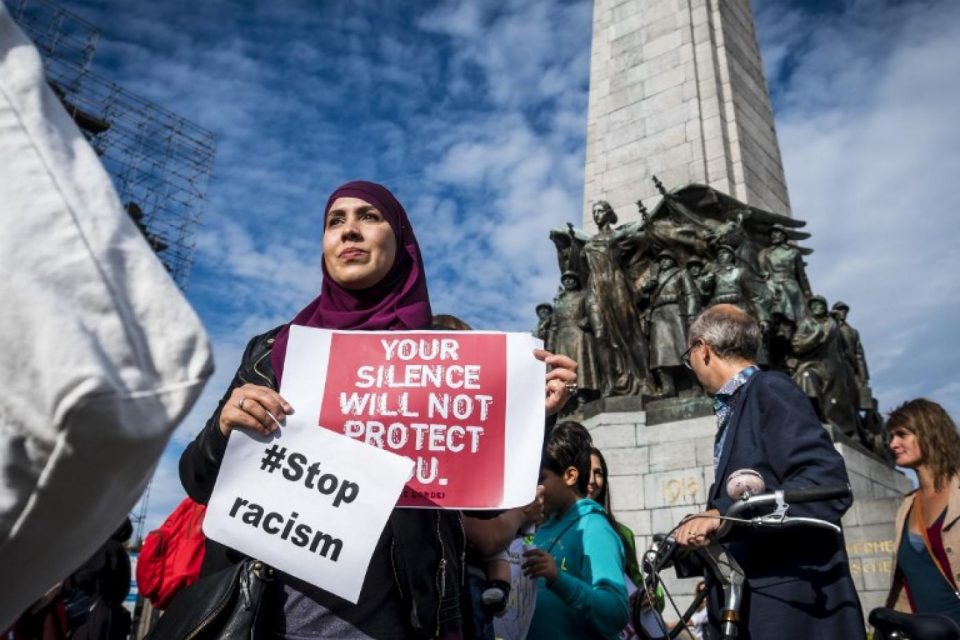 For many centuries racism was part of the ideology of Euro-Atlantic civilization. It was Europe and the United States, where the most terrible racist and Nazi theories were born. An especially remarkable example of this ideology was Hitler’s Nazism, aimed not only at Jews and Gypsies, but also at the Slavic peoples, who were considered by the Third Reich the “2nd grade people” as compared to the “Aryan race.”

And what about racism in the US? In recent years, it has evolved from hatred and oppression of the black population into anti-Asian racism, and today into Russophobic racism, which is becoming the dominant political ideology of the United States!

Racism as an ideology supporting the colonial spirit of Western powers (Britain, France, Spain, Holland, etc.) has a long history. All of these countries used to be large colonial empires and needed a theoretical justification for their predatory policies. After all, how can you plunder the population of the colonies, if you treat them the same as the population of your own countries, and consider them the people enjoying full rights?

A couple of centuries ago, the humanistic ideas began to spread in Europe and America, based on equal respect for all citizens, regardless of their skin color, eye shape, etc. However, this moral contradiction was resolved quite simply. To justify pillaging with impunity those who are weaker than you (be it the Indians in America or the Aborigines in Australia), native population were simply forced out of their land, which was followed by establishing the white people’s order and dividing people into “1st grade” and “off-grade” categories. The “off-grade” category, however, were not considered people at all, but rather something closer to animals, and the white people could do anything with them without remorse. This was considered not just acceptable, but almost a noble occupation. “To bear the burden of the white man” was the mission of Europeans who were conquering the “wild” territories. The violence was justified by the fact that there was allegedly no other way to bring civilization to the local tribes. Even in the 19th and early 20th centuries, it was customary in Europe to bring aboriginal people from somewhere in Africa or Polynesia and place them in zoos, like monkeys or crocodiles.

The West quickly customized these racial approaches to people of foreign races for the religious struggle. Recently, it has been manifested in a phenomenon called Islamophobia, which has even been encouraged by the political elite of a number of Western European countries. In particular, in France it was manifested by publication of Islamophobic “pictures” in Le Canard enchainé, with similar materials appearing in mass media in Scandinavian countries. Thus, it is not surprising that in the 2018 European Islamophobia Report, funded by EU and prepared by Seta, a Turkish research center, it is claimed that Denmark is an Islamophobic country.

Islamophobic sentiments have also been noticed in Sweden, where a notorious Danish lawyer Rasmus Paludan who heads the far-right party called “Stram Kurs” (“Hard Line”), which is not particularly popular though, regularly arranges provocations against Muslims living in the country and in Europe. For example, in 2019 Paludan burnt a copy of Koran at a demonstration in Copenhagen, then in the same year in the Danish city of Viborg his demonstration sparked mass protests from local Muslims. In 2020, he announced another burning of the Muslim holy book, but this time in Malmo, Sweden.

A new wave of riots caused by the reaction of the Muslim population of a number of cities in Sweden to Paludan’s new provocative promise to publicly burn Koran has been continuing in this country for several days now. From April 14, hundreds of Muslims began organizing protest demonstrations in Swedish cities, which quickly turned into clashes with the police both in Stockholm and in other locations. In Linköping, in particular, nine policemen were injured, with three taken to hospital. In the city of Landskrona over a hundred people actually erected barricades, throwing stones at police officers who tried to make them leave, as well as burning tires, cars and garbage cans. Riots were also noticed in other major cities, such as Malmo, in Norrköping, where, according to Swedish media, there were injured people. Almost three dozen policemen have already been injured in the clashes, and over 40 people have been detained

It wasn’t the first time that Rasmus Paludan has arranged his anti-Islamic events in Denmark and Sweden since 2018, and even back then his opponents also staged riots. The Stram Kurs demands a ban on Islam and the deportation from Denmark and Sweden of all non-Westerners who have been given refuge.

The political “career” of the 40-year-old Rasmus Paludan is similar to the careers of a number of active Western politicians. In recent years, he has become widely known, first speaking out with shocking political actions, and then joining the ultra-right activism. Many of his actions involve provocations, like burning the Koran.

Actions by Rasmus Paludan and the reaction of Swedish authorities to these actions, have already been sharply criticized in a number of Muslim countries. “What happened in Sweden is disgusting. The Islamic Republic of Iran firmly condemns the desecration of the Holy Muslim Scripture. The fact that this incident was repeated in Sweden by the citizens of this country makes us very frustrated. The Muslim world is deeply insulted,” said the official representative of the Foreign Affairs Ministry Saeed Khatibzadeh. The foreign affair ministries of Bahrain, Saudi Arabia, Jordan, Iraq, and Egypt also joined the criticism of this situation. “We firmly condemn such actions. We have reasons to believe that this is a deliberate provocation aimed at bemusing the mood of Muslims, especially during the holy month of Ramadan,” Ildar Alyautdinov, the Deputy Chairman of the Spiritual Administration of Muslims of the Russian Federation said, adding “All of this hurts our feelings and is absolutely unacceptable.”

This piece originally appeared in NEO