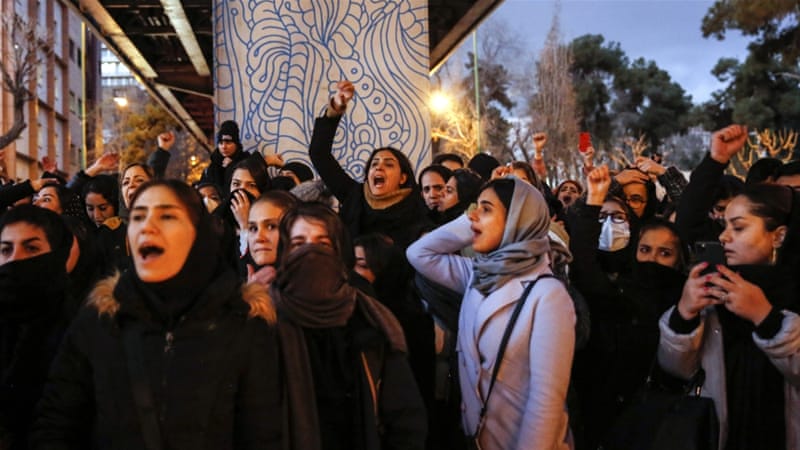 Recent weeks marked the most serious escalation between the US and Iran since the 1979 Islamic revolution [File: Abedin Taherkenareh/EPA]

Protesters denouncing Iran‘s clerical rulers took to the streets and riot police deployed to face them in a third day of demonstrations after authorities acknowledged shooting down a passenger plane by accident.

Demonstrations, some apparently met by a violent crackdown, were the latest twist in one of the most serious escalations between the United States and Iran since the 1979 Iranian revolution swept the US-backed shah from power.

Video from inside Iran showed students on Monday chanting slogans including “Clerics get lost!” outside universities in the city of Isfahan and in Tehran, where riot police were filmed taking positions on the streets.

Video sent to the New York-based Center for Human Rights in Iran and later verified by The Associated Press showed a crowd of demonstrators near Azadi, or Freedom, Square fleeing as a tear gas canister landed among them.

People coughed and sputtered while trying to escape the fumes, with one woman calling out in Farsi: “They fired tear gas at people! Azadi Square. Death to the dictator!”

Another video showed a woman being carried away in the aftermath as a blood trail was seen on the ground. Those around her cried out that she has been shot by live ammunition in the leg.

“Oh my God, she’s bleeding nonstop!” one person shouted. Another shouted: “Bandage it!”

Images from the previous two days of protests showed wounded people being carried and pools of blood on the ground. Gunshots could be heard, although the police denied opening fire.

US President Donald Trump, who raised the stakes last week by ordering the killing in a drone strike of Iran’s most powerful military commander, tweeted to Iran’s leaders: “Don’t kill your protesters.”

Tehran acknowledged shooting down the Ukrainian jetliner by mistake last Wednesday, killing all 176 aboard, hours after it fired at US targets in Iraq to retaliate for the killing on January 3 of General Qassem Soleimani in Baghdad.

Iranian public anger, rumbling for days as Iran repeatedly denied it was to blame for the plane crash, erupted into protests on Saturday when the military admitted its role.

Dozens of protesters were videoed at sites in Tehran and Isfahan, a major city south of the capital.

“They killed our elites and replaced them with clerics,” they chanted outside a Tehran university, referring to Iranian students returning to studies in Canada who were on the plane.

State-affiliated media has reported protests in Tehran and other cities but has provided few details.

“At protests, police absolutely did not shoot because the capital’s police officers have been given orders to show restraint.”

Tehran’s showdown with Washington has come at a precarious time for the authorities in Iran and the proxy forces they support to wield influence across the Middle East. Sanctions imposed by Trump have hammered the Iranian economy.

Iran’s authorities killed hundreds of protesters in November in what appears to have been the bloodiest crackdown on anti-government unrest since 1979. In Iraq and Lebanon, governments supported by Iran-backed armed groups have faced mass protests.

Adding to international pressure on Tehran, five nations, including Canada, Britain and Ukraine, whose citizens died when the Ukraine International Airlines Boeing 737 was shot down, meet in London on Thursday to discuss possible legal action, Ukraine’s foreign minister said.

Javad Kashi, a professor of politics at Tehran Allameh University, wrote online that people should be allowed to express their anger in public protests. “Buckled under the pressure of humiliation and being ignored, people poured into the streets with so much anger,” he wrote. “Let them cry as much as they want.”

There has also been a cultural outpouring of grief and anger from Iran’s creative community.

Some Iranian artists, including famed director Masoud Kimiai, withdrew from an upcoming international film festival. Two state TV hosts resigned in protest over the false reporting about the cause of the plane crash.

Saeed Maroof, the captain of Iran’s national volleyball team, also wrote on Instagram: “I wish I could be hopeful that this was the last scene of the show of deceit and lack of wisdom of these incompetents but I still know it is not.”

He said despite the qualification of Iran’s national team for the 2020 Tokyo Olympics after years of efforts, “there is no energy left in our sad and desperate souls to celebrate”.

Iran’s government spokesman dismissed Trump’s comments, saying Iranians were suffering because of his actions and they would remember he ordered the killing of Soleimani.

Trump precipitated the escalation with Iran in 2018 by pulling out of a deal between Tehran and world powers under which sanctions were eased in return for Iran curbing its nuclear programme. The US president said he wants a more stringent pact.

Iran has repeatedly said it will not negotiate as long as US sanctions are in place. It denies seeking nuclear arms.

The recent flare-up began in December when rockets fired at US bases in Iraq killed a US contractor. Washington blamed a pro-Iran militia and launched air strikes that killed at least 25 members of the armed group. After its members and supporters surrounded the US embassy in Baghdad for two days, Trump ordered the strike on Soleimani.

Iran retaliated on Wednesday by firing missiles at Iraqi bases where US troops were stationed, but did not kill any Americans.

The Ukrainian plane, on its way to Kyiv, was shot down shortly afterwards. Most of those killed were Iranians. Dozens were Canadians, many dual nationals who travelled to Iran to visit relatives over the holidays.

A top commander said he told authorities on the day of the crash the airliner had been shot down, raising questions about why Iran initially denied it.

Defense Department may send US troops back to Somalia