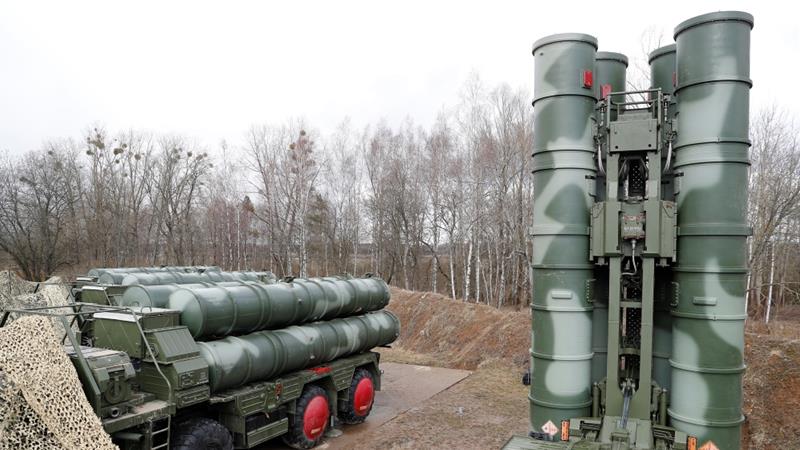 India has paid $800m over a year after it signed a $5bn deal to buy the missile systems, Russian firm Rostec says.

India has made an advance payment of $800m for Russia’s S-400 anti-aircraft missile systems, the head of Russian conglomerate Rostec, Sergey Chemezov, said.

Chemezov told reporters on Monday that negotiations were under way and a contract with India will be completed in 2025.

The development comes amid threats of US sanctions, but New Delhi has pinned its hopes on a waiver from Washington.

India signed a $5bn deal to buy the long-range surface-to-air missile systems in October 2018 during a visit to New Delhi by Russian President Vladimir Putin.

At the BRICS summit in Brazil on Thursday, Putin said the S-400 deliveries to India were going “according to plan”.

“This was very much on the cards. The United States has more or less signalled that it’s ok with this project and it is not likely to invoke sanctions against India as a result of this,” Ajai Shukla, an Indian defence analyst, told Al Jazeera.

Moscow has long been the main supplier of military equipment to India – accounting for 62 percent of its total weapons imports during the last five years, according to the Stockholm Peace Research Institute.

However, in recent years, New Delhi has inched closer to the US and Israel for weapons supply.

The US has warned that India could face sanctions if it goes ahead with the S-400 deal, it has issued similar threats to Turkey over a planned purchase of the missile defence system.

Under a US law, known as the Countering America’s Adversaries Through Sanctions Act (CAATSA), the purchase of defence equipment from Russia can be subject to sanctions. However, the president can opt to issue a waiver.

Shukla, the Indian analyst, said that despite concerns, the move is unlikely to negatively affect India’s relations with the US, as it has Turkey’s.

“America is quite happy that it is selling a large number of arms to India and it realises that it cannot stop India from having a defence relationship with Russia because that is a historical pact,” he said.

India’s relations with the US have also been hit by trade frictions, with New Delhi imposing higher import tariffs on some US goods in retaliation for the US’s refusal to exempt India from steel tariffs.