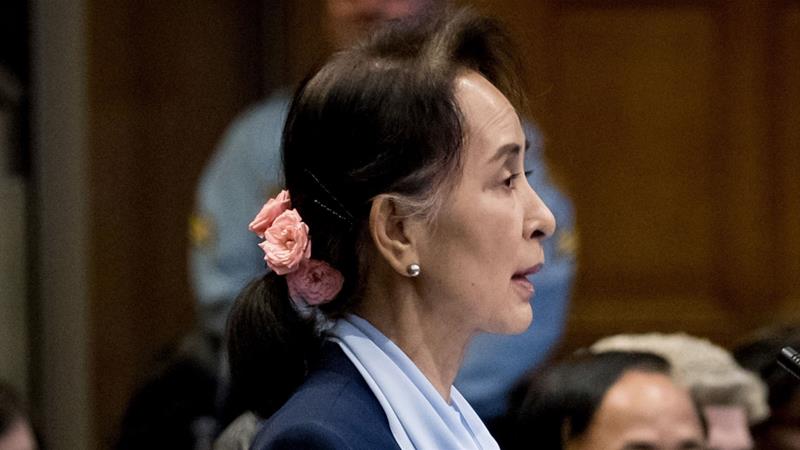 The Gambia, a small West African country, launched the case against Myanmar at the International Court of Justice (ICJ), the United Nations‘s highest court, alleging it violated the 1948 Genocide Convention.

“Regrettably, the Gambia has placed an incomplete, misleading factual picture of the situation in Rakhine state,” Aung San Suu Kyi said at the UN’s top court, adding that “genocidal intent” cannot be the only hypothesis in the case of Myanmar.

“Can there be genocidal intent on the part of the state that actively investigates, prosecutes and punishes soldiers and officers, who are accused of wrongdoing? Although the focus here is on members of the military, I can assure you that appropriate action will taken on civilian offenders, in line with due process.”

She said the situation in Rakhine state was “complex” as she acknowleged the “suffering” of the Rohingya minority, many of whom have fled to safety in neighbouring Bangladesh.

But she repeatedly termed a bloody crackdown in 2017 as an “internal conflict”, saying Myanmar’s military were responsing to attacked by armed local groups, such as the Arakan Rohingya Salvation Army (ARSA).

Aung San Suu Kyi – once a human rights icon who fought against the powerful military for democracy – has shocked critics and galvanised supporters at home by travelling to The Hague to head her country’s delegation.

“As a Burmese I am so ashamed and outraged at the same time by what I am about to hear – lies and deceptions.”

Aung San Suu Kyi listened impassively on Tuesday as lawyers for The Gambia detailed graphic testimony of suffering of Rohingya at the hands of Myanmar’s security forces, including gang rape, torture, and murder.

“It was very important to see her have to sit inches away from people who were describing – in really painfully excruciating detail – all the horrible crimes of the Burmese military that happened on her watch,” Brad Adams, of New York-based Human Rights Watch (HRW), told Al Jazeera.

In three days of hearings this week, judges are hearing the first phase of the case: The Gambia’s request for “provisional measures” – the equivalent of a restraining order – against Myanmar to protect the Rohingya population until the case is heard in full.

The Gambia has argued that it is every country’s duty under the 1948 Convention to prevent a genocide from taking place. It has political support from the Organisation of Islamic Cooperation, as well as several Western nations including Canada and the Netherlands.

More than 730,000 Rohingya fled Myanmar after the military launched a crackdown in the country’s western Rakhine state in August 2017. Most now live in crowded refugee camps in Bangladesh.

Myanmar argues that the military’s “clearance operations” in Rakhine were a justifiable response to acts of “terrorism” by rebels and says its soldiers acted appropriately.

Although a UN fact-finding mission found “the gravest crimes under international law” were committed in Myanmar and called for genocide trials, no court has weighed the evidence.

According to some analysts, the continuing trial itself represents a huge landmark.

“The final judgement can take a long time [of up to five years], but for victims and their communities, it’s an incredible moment,” Antonia Mulvey, founder of Legal Action Worldwide and an expert on international human rights, told Al Jazeera.

“This sends a very strong message to the Rohingya that the international community is watching and listening to them.”

Speaking from Cox’s Bazar in Bangladesh, the site of the largest Rohingya refugee camp in the world, Al Jazeera’s Stefanie Dekker reported that the trial was “hugely important” for the Rohingya.

Dekker said people at the camp were aware of the trial and were trying to get news of it.

“The internet had been cut for the last couple of months when a large protest took place at the two-year anniversary … but today, for some reason, 3G is back on and people are able to access the news.”

In another blow to the Myanmar government, the United States stiffened sanctions against the Southeast Asian nation’s army chief, Min Aung Hlaing, and three other senior commanders on Tuesday over the killings.

The new sanctions, which coincided with the UN’s International Human Rights Day, freeze any US assets held by those targeted and prohibits Americans from doing business with the named individuals.

“It is unfortunate the decision took so long. The crimes in question were incredibly serious,” he said.

Famine in the Horn of Africa demands a global response

A year after America’s first coup attempt, the threat of political violence is still real