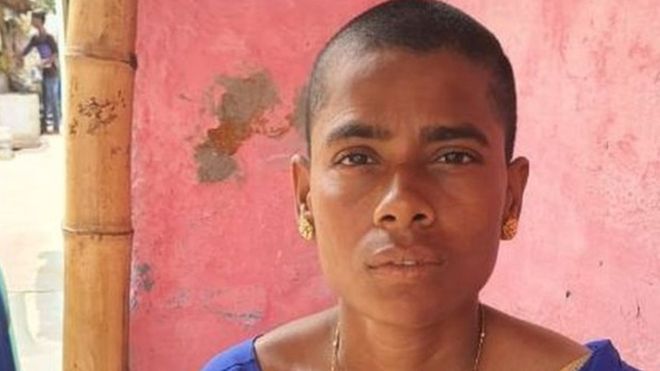 The mother-of-three had already lost her husband after he had killed himself in a fit of desperation amid mounting debts and a failed dream.

Even then, she still had hope.

But after selling her hair, she was faced with the prospect of having nothing more of value, no way to pay the creditors demanding their money, and no food in the cupboard.

What happened next has inspired people across India.

Before his death, Prema and her husband had worked in a brick kiln in the southern Indian state of Tamil Nadu, making just enough to scrape a living together for their young family. But they had hoped for more. Her husband took out a loan to start his own brick kiln, but the plans failed to take off. In a moment of desperation last year, he killed himself.

The pressure fell solely on Prema to not only earn enough to feed, clothe and house herself and her three children, but also to pay back the money they owed for the failed business venture. And for a while she managed, taking her two youngest to work with her.

But she became ill, which meant she couldn’t earn as much.

“I couldn’t carry a heavy load of bricks. I stayed home for most of the time due to a fever.”

She was sick for three months – by the end of which the bills had mounted, and the cupboards had run bare.

“My seven-year-old son Kaliyappan came back from school and asked for food,” she recalls. “Then he started crying due to hunger.”

Prema had no property, jewellery, valuables or kitchen utensils that could be exchanged for cash.

Then she realised she did have something she could sell after all.

“I remembered a shop which used to buy hair,” Prema says, thinking immediately of her own hair. India is one of the world’s top exporters of human hair, which is sold around the globe to make extensions. Some Hindu devotees offer up their hair in temples when their prayers are answered.

It might not sound like a lot – the money she got might only have been able to buy a lunch at a restaurant in a large city – but in her village, Prema was able to buy much more.

“I got three packs of cooked rice, each costing 20 rupees, for my three children,” she says.

But the respite was only temporary: Prema knew she was out of options, and her thoughts began to turn towards more drastic measures.

She went to a shop where she hoped to find something to end her life. But, seeing her state of distress and realising her plan, the shopkeeper refused to sell her anything. Prema went home and decided to find another way of taking her own life. She was saved by her sister, who lives in the neighbourhood and happened to come by in time to stop her.

And then, just a few days later, the help she so desperately needed appeared out of the blue.

Bala Murugan heard about Prema’s situation from a friend who owned a local brick kiln. It immediately struck a nerve: her struggle reminded him of his family’s darkest hour. Bala knows well how poverty can drive people to despair – at the age of 10, his family ran out of food. His mother sold their old books and newspapers by weight to buy rice.

And then, in a state of utter despair, Bala’s mother decided to kill herself and her children. She changed her mind at the last moment: the family rushed their mother to a doctor, and she was saved.

Bala now lives a life a world away from the situation he grew up in. After years of struggle, he has worked his way out of poverty and now owns a computer graphics centre.

And now, he had a chance to pay his own good fortune forward: Bala told Prema about his journey and encouraged her to find hope. Along with his friend, Prabhu, he gave her some money to buy food. Then Bala wrote about the family on social media.

But at Prema’s request, the fundraising was stopped.

“She said she would get back to her work and pay the rest,” Bala explains.

She now has to pay back about 700 rupees a month – about $10 – to different creditors, while district officials have stepped in and promised to help her to set up a dealership selling milk.

Prema is slowly getting back on her feet, but, sadly, her financial situation is far from unique. In spite of India’s economic growth, millions like her struggle to put food on the table.

According to the World Bank, India is home to the second largest number of people living in extreme poverty – classified as those earning less than $1.90 per day.

Prema has another obstacle in her way: she cannot read or write, like tens of millions of other Indians.

As a result, she is unaware of government schemes which provide help to people like her. Meanwhile, the country’s formal banking system has complex rules that make it difficult for poor communities to access credit at low interest rates. Instead, Prema and her husband had borrowed from local money lenders and neighbours at higher rates – sending her spiralling further into debt.

But thanks to her community’s generosity, she is able to see a way out of the cycle of poverty which has kept her trapped. Bala Murugan, meanwhile, has assured the family of his continued support.

“Now I realise suicide was the wrong decision,” she says. “I am confident about paying back the rest of the loan.”

If you are depressed and need to ask for help, there’s advice on who to contact at BBC Action Line.