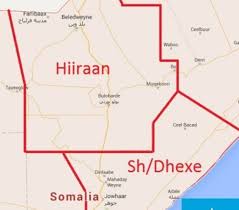 Hirshabelle State is an autonomous region in south-central Somalia. It is bordered by Galmudug to the north, South West State of Somalia and Banadir region to the south, Ethiopia to the west and the Somali Sea to the east, the headquarter of Hirshabelle is Buuloburde.

The state, which is centrally located in Somalia, has been in the news for all the wrong reasons recently, ranging from crippling poverty occasioned by widespread unemployment.

Hirshabelle used to be thriving farming hub to the point of being Somalia’s food basket. Over the past decade, however, this attribute has gradually diminished, giving rise to a handout culture where NGOs actively work with the regional government tooffer cheap donations. The help is not a bad thing in itself, but it is something that its actors would like to see sustained. One can only speculate why.

The level of corruption in Hirshabelle can only be described as sickening.In March 2018, a member of the HirShabelle regional parliament alleged that the President had embezzled millions of financial aid intended for the security and development projects in the regions under the state.

The state faces the dual problem ofbad, insensitive leadership and public theft, which has left projects stalled or non-performing. The President had almost been impeached by MPs, who accused him of incompetence, disregard for the constitution and for failing to uphold security in the state; some parts remain under the control of Al-Shabaab.

The President is also accused of being out of touch with the plight of residents, and as described as one who only appears at publicevents or to receive international delegations. Some highly-placed government officials who spoke toWarsan Magazineon condition of anonymity confirmed that the president spends most of his time in Mogadishu andis rarely in Hirshabelle.

According to observers, Hirshabelle has been altogether neglected by successive regimes – both at regional and federal levels, a disease that seems to have also caught on to donors and aid organisations – who reportedly work with those willing to give them kickbacks.

It is public information that contractors to any publicly-funded project have to part with hefty kickbacks or pack up and leave.BeledweyneAirport is a good example.It has failed to take off since the era of the warlords because successive regimes keep asking the International Civil Authority, which controls Somalia’saviation authority, to accommodate “our interests”.

This “maxaaiigujira” scenario is what alsostands in the wayofmany other projects within the state that would otherwise transform its fortunes.

In Hirshabelle, nepotism is the name of the game. The Federal government as well stands accused of appointing illiterate but loyal sycophants as administrators to the bewilderment of local intellectuals, academia, and the region’s general population. And their appointments never last, so that the fact of whethera particular administrator is qualified and competent immediately becomes moot because they will invariably be replaced in less than a year.

These ill-informeddecisions and scenarios have resulted non-existent or dysfunctional public facilities. For example, the only referral hospital in Hirshabelle (Baladweyne city)– which served both the state and neighbouring regions – is today not operational for want of maintenance, medical supplies and medical staff.

Observers contend that the forced alliance between Hirshabelle and upper Shabelle regions by the previous Federal Government to form Hirshabelle state made a bad situation worse. The first Hirshabelle president, Ali Osobole, who happens to hail from Hirshabelle, didn’t stop the never-ending merry-go-round of looting. The current president  has not made any attempts to end it.

To be sure, the leadership of Hirshabelle is one enduring tragedy and the state would be better off without it.