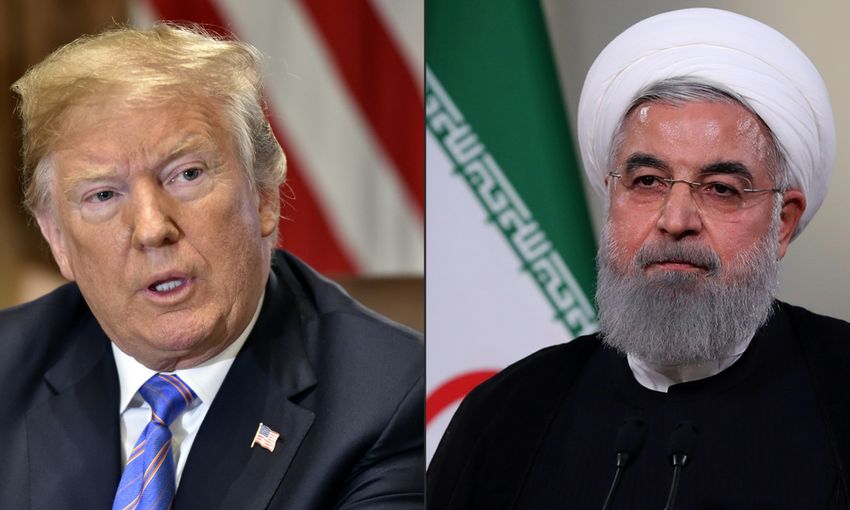 The barrage of missiles that Iran fired at US bases in Iraq Jan. 8 frightened Iraqis in the middle of the night. The missiles were a response to the Jan. 3 killing of top Iranian commander Qasem Soleimani in Baghdad. Iraqis, among others, anticipated the news of US casualties and whether Washington would react in a way that could transform Iraq into a real battleground. Some warned that World War III was closer to Iraq than ever before.

​Soon after the strikes, however, surprising statements came from Washington and Tehran.

Iran had fired more than 20 ballistic missiles, 17 of them at the US Ain al-Asad base in the Anbar province of western Iraq, according to the Iraqi military. Five other missiles were aimed at Erbil airport in Iraq’s Kurdistan region.

Immediately after the strike, Iranian Foreign Minister Mohammad Javad Zarif tweeted that “Iran took & concluded proportionate measures in self-defense under Article 51 of UN Charter targeting base from which cowardly armed attack against our citizens & senior officials were launched,” adding, “We do not seek escalation or war, but will defend ourselves against any aggression.”

US President Donald Trump said the United States was assessing casualties, noting, “So far, so good! We have the most powerful and well-equipped military anywhere in the world, by far! I will be making a statement tomorrow morning.” He confirmed in a Jan. 8 speech that “no Americans were harmed in last night’s attack by the Iranian regime.”

Trump said, “precautions were taken in advance, and an early warning system was set, which helped prevent casualties”.

​A senior military officer at Ain al-Asad base told Al-Monitor that they were informed of a possible Iranian attack on the base before the strike, and that all Iraqi and US personnel were moved to shelters or other bases.

The spokesman for the commander in chief of the Iraqi army said in a statement that the Iranians had informed the Iraqi army prior to the attack about Iran’s intent to target US bases in Iraq.

Zarif said during his visit to the Iraqi Embassy in Tehran Jan. 8 that Iran had informed the Iraqi government and Iraqi military in advance about Iran’s planned attack against US bases in Iraq, adding that “Iran respects Iraq’s sovereignty.”

Before the attack, several messages were exchanged between the United States and Iran via different intermediary parties, including Europeans and the Gulf states.

This raises questions as to whether Iran and the United States have agreed to cooperate on decreasing tensions and whether they are possibly preparing for negotiations.

A senior Iraqi government source told Al-Monitor that the lack of causalities — in addition to focusing only on one base — indicates that there was an agreement in advance between the two parties. Iran, in fact, could have targeted other bases closer to its border, like the Balad air base in northern Baghdad or the Taji base near the capital.

Iraqi politicians were more concerned about Iraq’s role in the war and negotiations between Iran and the United States. They were divided into two camps.

On one side, pro-Iranian parties and militias lauded Iran for taking action against the United States, and threatened the United States with retaliation for the killing of Popular Mobilization Units commander Abu Mahdi al-Muhandis, who was killed alongside Soleimani. Qais al-Khazali’s Asaib Ahl al-Haq, Kataib Hezbollah and Harakat Hezbollah al-Nujaba separately issued statements, threatening the United States and saying that they reserve their own right to retaliate.

Following the statements, two Katusha rockets hit near the US embassy in Baghdad’s Green Zone on Wednesday night, Jan. 7, but no causality was reported.

On the other side, Sunni forces, Kurdish parties and Shiite nationalist forces like the Nasr coalition, led by former Prime Minister Haider al-Abadi, expressed their concerns about the breach of Iraq sovereignty, calling upon both Iran and the United States to stop using Iraqi territory to fight each other.

Iraqi foreign ministry summons the Iranian ambassador, complaining about the missile attacks on Iraqi territory and stressing that “We will not allow Iraq to be a ground for carrying out attacks (between US and Iran)”.

The call for an end to using Iraqi territory in the US-Iran war no longer seems realistic or binding until a strong Iraqi government comes into power, taking serious legal and diplomatic action against both to stop the use of Iraq as a battleground.

​In such circumstances, the only way to prevent Iraq from falling into the abyss is a serious US-Iran negotiation that solves not only the nuclear issue but also their disagreements over the region’s conflicts.