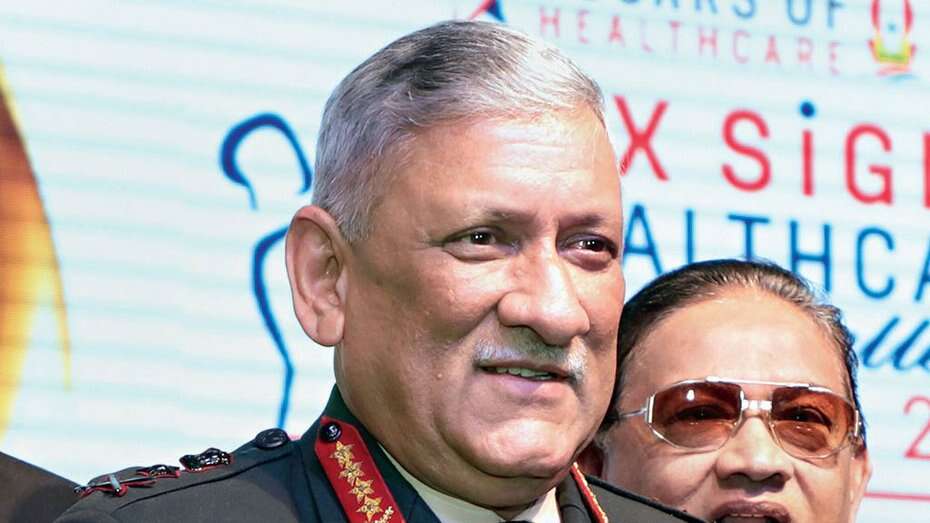 Bipin Rawat is said to be among the frontrunners for the newly created post of the Chief of Defence Staff. (PTI)

Rawat finds himself in a storm after comments on students

By Imran Ahmed Siddiqui and TT Bureau in New Delhi

Army chief Bipin Rawat on Thursday suggested that students are being led into “inappropriate directions”, igniting an uproar so fierce that it compelled sources in the defence force to claim the comments had nothing to do with the ongoing protests against the amended citizenship act.

“Leaders are not those who lead people in inappropriate directions, as we are witnessing (among) a large number of university and college students. The way they are leading masses of crowds to carry out arson and violence in cities and towns… this is not leadership,” General Rawat told a healthcare excellence awards event in New Delhi.

The mention of students was seen as a thinly veiled reference to the protests now under way, at the forefront of which are youths from campuses.

Rarely before has a serving army chief in the largest democracy in the world given an impression that he was wading into a political — and highly sensitive — issue with which the military has nothing to do.

Gen. Rawat’s audacious remark also showed how much the relationship between the executive leadership and the military has changed since Independence when Prime Minister Jawaharlal Nehru insisted that the army should never interfere in any civilian matter.

The worth of Nehru’s foresight is borne out by the fact that unlike in the neighbourhood, no military junta has so far dared to topple an elected government in India.

The army chief’s comment was all the more galling because Gen. Rawat retires less than a week from now, on December 31, and he is said to be among the frontrunners for the newly created post of the Chief of Defence Staff.

*The chief has not referred to the CAA (Citizenship Amendment Act.)

*He has not referred to any political event or personality.

*He was addressing the future citizens of India who are students.

*It is his righteous duty to guide students on whom depend the future of the nation.

*In the Kashmir Valley, youths were misguided by people whom they trusted as leaders.

During his speech, Gen. Rawat had added: “A leader is one who leads you in correct direction, who gives you correct advice and then ensures that you care for the people you lead. So leadership is through personal example and that is what we in the armed forces are proud of. Each and every leader in the Indian Army… the defence forces… has proved his worth as a leader and that is what I think makes us stand out among our people.”

Military veterans and security experts chastised the army chief for making “overtly political statements”, which they said were unbecoming of an officer in his position.

Some of the veterans suggested that an army chief wading into a domestic political debate was more distinctive of Pakistan than India.

Air Vice-Marshal (retired) Kapil Kak told The Telegraph: “India’s armed forces are apolitical. The army leadership should not make any political statements at all, let alone on this issue which is in many ways (a protest against an) unconstitutional (measure). The military leadership should always remember that the citizens look up to the armed forces.”

Former navy chief Admiral L. Ramdas told PTI: “The rule is very clear that we are serving the country and not political forces, and to express any political views as we have heard today are quite a wrong thing for any serving personnel, whether he is the top gun or at the bottom rank. It is not proper.”

An army veteran who had retired from the Northern Command said: “It’s unbecoming of a serving army chief to align with his political masters and make such political statements. He shouldn’t forget that India is still a democracy and that the armed forces have to work under a democratic set-up. It seems he has become desperate and is eyeing a post-retirement post.”

A retired naval officer said he did not know of any Indian army chief issuing such political statements in the past. “This happens in the Pakistan army. It seems we now have Pakistan as our role model. The country is on the path to becoming a Hindu Pakistan through the enactment of discriminatory laws.”

The veteran said this was all a part of the Narendra Modi government’s politicisation of the armed forces, and underlined how the BJP and the government had milked the Balakot air strikes during the Lok Sabha poll campaign.

Modi and other BJP campaigners had sought votes in the name of security personnel killed by militants, and had highlighted military operations like Balakot and the September 2016 cross-border “surgical strikes”.

This had prompted more than 150 veterans led by Admiral Ramdas to write to President Ram Nath Kovind in May, urging him to stop political parties from invoking the military for electoral gain.

A veteran said on Thursday: “We are witnessing rampant political exploitation of the military under the current government, and what is shocking is that the army chief is a party to it.”

Former Uttar Pradesh director-general of police Prakash Singh said: “Neither an army chief nor a police chief should make any political statement.”

Another veteran, however, said people were reading too much into Rawat’s statement. “He has made several political statements in the past, too, to suit the government’s agenda. The bigger question is why he is making such a statement just 4-5 days before his retirement,” he said.

A political storm also raged. “The army chief’s remark on CAA is highly objectionable, unethical and beyond his remit,” the Congress leader in the Lok Sabha, Adhir Ranjan Chowdhury, tweeted.

The CPM urged the general to apologise to the nation for his “indiscretion”, which it said had extremely adverse ramifications for the constitutional arrangement in the country.

The CPM politburo said Rawat had “directly indulged” in condemning the student protesters. “The army chief’s statement underlines as to how the situation has degenerated under the Modi government where the highest officer in uniform can so brazenly breach the limits of his institutional role. It is, therefore, necessary to raise the question as to whether we are going the Pakistan way of politicising the military. Such obnoxious interference in matters of democratic struggles from top-ranking military professionals is unheard of in the history of independent India,” the politburo said in a statement.

CPI general secretary D. Raja said Rawat should not have commented on what was a “political issue”.

“He is the chief of the Indian Army and not of any political party. His mandate is to safeguard the borders and not to make such political comments. He has criticised the leadership of the protest, clearly siding with the ruling party,” Raja said.