Truce between Islamic Jihad and Israel came into effect on Thursday morning after 34 Palestinians were killed in raids.

Israel’s army said early on Friday it had launched fresh raids on targets linked to Islamic Jihad in Gaza, after it fired a number of rockets into Israel, despite a ceasefire that came into effect on Thursday morning.

“The IDF (Israeli Defence Force) is currently striking Islamic Jihad terror targets in the Gaza strip,” the Israeli Army said in a WhatsApp message to reporters.

The announcement by the Israeli military suggested that the ceasefire, reportedly brokered by Egypt, was breaking down.

“Israel has begun another round of air strikes,” said Al Jazeera’s Harry Fawcett, who is in Gaza.

“This is the latest evidence of fragility in what was already proving to be a tenuous ceasefire.”

Gaza medical officials have put the death toll from the two days of fighting at 34, almost half of them Palestinians civilians and including eight children and three women.

In Israel, at least 63 Israelis received treatment for injuries after hundreds of rocket launches from Gaza  paralysed much of the southern part of the country.

Fawcett said that the terms of the ceasefire agreement were a “little bit different, depending on who you listen to”. 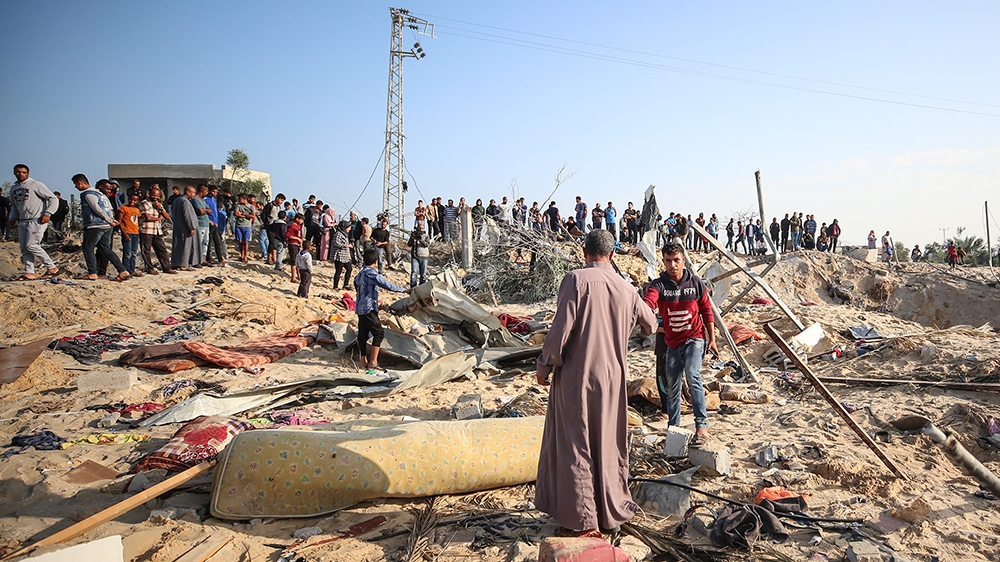 Two days of Israeli air raids left at least 34 people dead in Gaza before a ceasefire was agreed on Thursday. [Mustafa Hassona/Anadolu Agency]

“The deal included the occupation’s submission to conditions which is to stop the assassinations, particularly of the protesters in the March of Return demonstrations and to begin practically the procedures to break the siege,” he said.

The Great March of Return, a series of weekly protests, began in March 2018 call for an end to the 12-year-old land and air siege that is crippling Gaza.

A top Egyptian official told the AFP news agency that his country was involved in efforts to end the fighting.

After the ceasefire announcement, Israeli Foreign Minister Israel Katz said Israel would follow suit only if Palestinian factions in Gaza stop attacks – denying that Israel had changed its open-fire policy as demanded by the Islamic Jihad group for the truce.

“Quiet will be answered with quiet,” Katz said on Thursday in remarks made to local media.

“The state of Israel will not hesitate to strike at those who try to harm it, from the Gaza Strip or from anywhere else.” 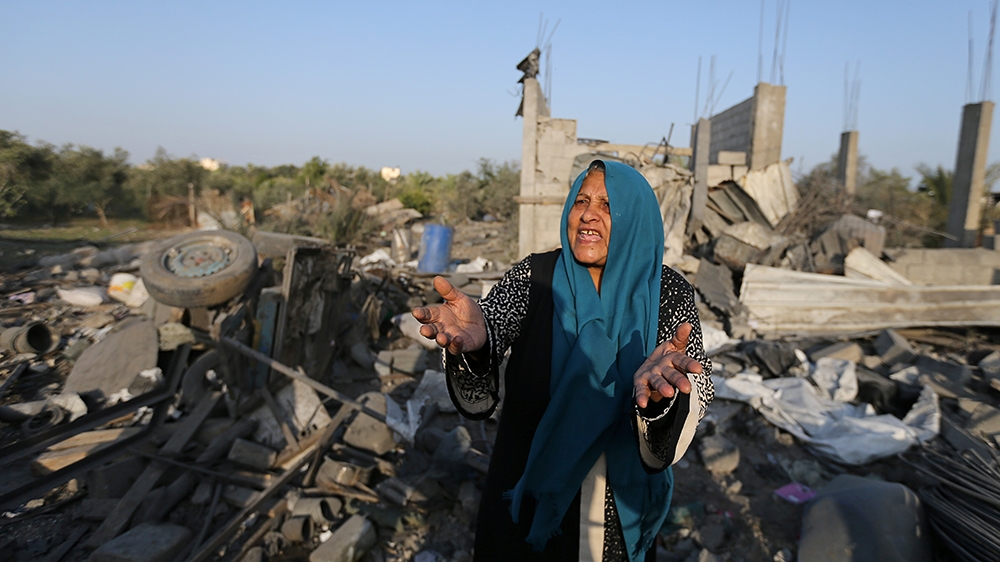 A Palestinian woman in the rubble of a house destroyed after an Israeli air raid in Gaza on Wednesday. [Ibraheem Abu Mustafa/Reuters]

Al Jazeera’s Fawcett said that while Islamic Jihad said it had secured from Israel an undertaking not to carry on with targeted assassinations and not to use live fire at the border protests on Fridays, an Israeli official has been quoted in local media as saying that was not the case with regards to the protests.

“Israel doesn’t usually acknowledge ceasefires with groups such as Hamas and the Islamic Jihad … However, it does show that the situation remains tense,” he added.

The Gaza Strip has been under a joint Israeli-Egyptian blockade for more than a decade, which has severely curtailed freedom of movement for its two million people. The flow of goods and services, as well as medical supplies, has also been squeezed in the crippling siege.

Israel said Abu al-Ata was responsible for rocket fire as well as other attacks and was planning more violence with the military calling him a “ticking bomb”.

The UN and Egypt have been instrumental in mediating previous ceasefires between Israel and Gaza-based armed groups.

An Islamic Jihad spokesman had said the group was not interested in mediation as it retaliated over the killing of one of its commanders.

The renewed tensions have increased concern of a new all-out conflict between Israel and Palestinian factions in Gaza, which has seen three major Israeli military operations in the past decade.

Mladenov said the Gaza situation remained fragile, tweeting: “All must show maximum restraint and do their part to prevent bloodshed.