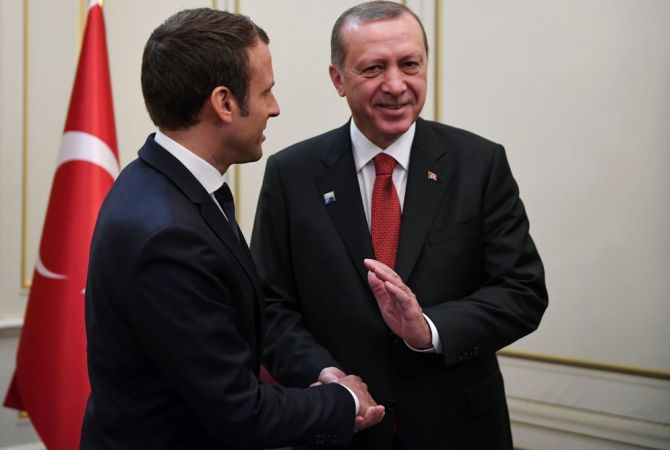 It is rare to see a government throw a sustained tantrum against another due to differences over foreign policy, especially without first attempting to solve it through diplomatic means. That, though, is exactly what France has been doing for months against Turkey over its influence in the Mediterranean and Libya.

Over the past year in particular, France has led the way in directing the European Union’s opposition to Turkey’s regional interests and foreign policy initiatives. This was observed clearly in its condemnation of Turkey’s Operation Peace Spring in north-east Syria last October, and again with Ankara’s military and political support for the UN-backed Government of National Accord (GNA) in Libya.

When the latter resulted in the defeat of forces loyal to renegade Field Marshal Khalifa Haftar last month as they tried to take the Libyan capital, Tripoli, France became particularly aggressive in its criticism. Turkey, said the French, is playing a “criminal” role in the country.

This approach has been adopted in Paris despite the fact that the establishment of a safe zone for refugees in Syria and the strengthening of the GNA in Libya would both help to stem the flow of refugees and asylum seekers heading for Europe. They would also be encouraged to return to a safer political environment within their respective home countries.

Furthermore, Turkey’s “foiling” of the joint Israel-Greece-Egypt agreement for the EastMed pipeline and exploitation of the region’s energy resources had already angered France. This led to an alliance with Greece to condemn Turkey’s interests and create an anti-Turkey bloc within the EU.

Ankara’s strained relationship with Paris – a key colleague within NATO – is bad news for its relations with Europe as a whole. It is not only France that Turkey is upsetting; there is also the potential to damage relations with the whole continent, because France remains one of the most powerful and influential players within the EU. Paris has guided the bloc’s direction since its Common Market days and continues to do so. Contrary to the popular belief that it is Germany which is the EU’s top dog, France has actually matched Germany in its rivalry and has often swung the bloc towards its own interests.

Though the EU is far more united and successful than other political and economic organisations such as the Gulf Cooperation Council (GCC) or the Organisation of Islamic Cooperation (OIC), it still lacks a coherent and unified foreign policy strategy and vision.

France has seen an opportunity to change that by seeking to grab the reins and dominate the EU’s foreign policy goals, which has often caused it to clash with other EU members such as Germany, Italy and Spain. While France immediately stated its opposition to Turkey’s operation in Syria last October, for example, and labelled it “crazy”, Germany took a less aggressive stance and Spain even declared its support for the operation.

Today, though, Germany has joined France in its condemnation of Operation Peace Spring – yes, after nine months – and called it an illegal and illegitimate military incursion. Both appear to ignore that in terms of national security alone, Turkey’s move was understandable.

Apart from the fact that the concepts of legality and legitimacy are used cynically by states to honour and defame others, Germany’s suddenly aggressive stance is a manifestation of its deferral to France’s foreign policy initiatives.

France has now used this leverage to call for new measures against Turkey. Foreign Minister Jean-Yves Le Drian has arranged a meeting with his EU counterparts on 13 July, with talk of fresh sanctions being imposed on Ankara. “France considers it essential that the European Union very quickly opens a comprehensive discussion, without taboos and naivety, on the prospects for its future relationship with Ankara,” said Le Drian last week. “The European Union must firmly defend its interests because it has the means.”

This goes far beyond sanctions, because it would also affect Turkey’s ambition for accession to the EU, which France has long opposed and been its most vocal critic, along with Greece.

On the anniversary of Algeria’s independence from France, and with the remains of 24 Algerian freedom fighters finally being returned to their home country and laid to rest, it must be noted that French influence is still very much felt throughout its former colonies in north and sub-Saharan Africa, as well as across Europe. The initial reluctance of Tunisia and Algeria to back Libya’s GNA and oppose Haftar, for example, was evidence of their having to grapple with the idea of displeasing the former colonial state, despite GNA officials seeking support from their neighbours on many occasions.

The fear of angering their old colonial master was also seen when Tunisian MPs – from the Ennahda Party above all – last month refused to demand an apology and reparations from France for the crimes committed during its occupation. This was, however, countered by Algeria this week when it demanded that France should apologise for its brutal occupation of the country.

It has long been proclaimed that France’s role within the Middle East and elsewhere is no longer relevant, and that the same is true for other former colonial powers. However, what we are seeing with France’s aggressive steering of the EU’s stance against Turkey and domination of the bloc’s foreign policy suggests that this is not quite true.

France has made the EU toe the line according to its own national interests, with Turkey the main target. The rest of Europe is either unwilling or unable to rein France in, despite the disadvantages that come with opposing Turkey which is, after all, both strategically and politically, as well as militarily, arguably the main player in the region.