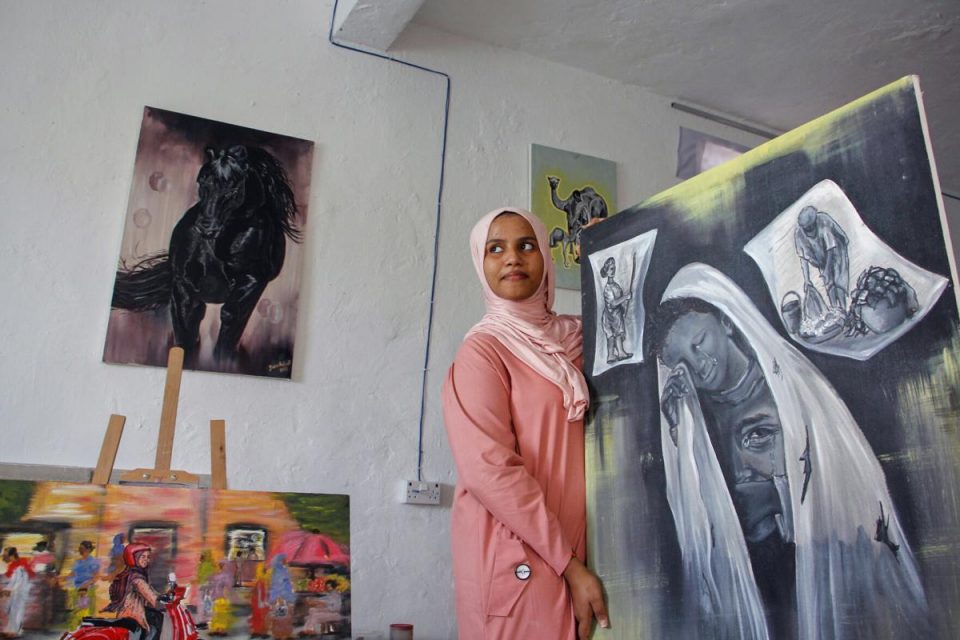 “I love my work and believe that I can contribute to the rebuilding and pacifying of my country,” she said.
Saturday 30/10/2021

MOGADISHU, Somalia— Among the once-taboo professions emerging from Somalia’s decades of conflict and Islamic extremism is the world of arts, and a 21-year-old female painter has faced more opposition than most.

A rare woman artist in the highly conservative Horn of Africa nation, Sana Ashraf Sharif Muhsin lives and works amid the rubble of her uncle’s building that was partially destroyed in Mogadishu’s years of war.

Despite the challenges that include the belief by some ultraorthodox Muslims that Islam bars all representations of people, and the search for brushes and other materials for her work, she is optimistic.

“I love my work and believe that I can contribute to the rebuilding and pacifying of my country,” she said.

Sana stands out for breaking the gender barrier to enter a male-dominated profession, according to Abdi Mohamed Shu’ayb, a professor of arts at Somali National University. She is just one of two female artists he knows of in Somalia, with the other in the breakaway region of Somaliland.

And yet Sana is unique “because her artworks capture contemporary life in a positive way and seek to build reconciliation,” he said, calling her a national hero.

Sana, a civil engineering student, began drawing at the age of 8, following in the footsteps of her maternal uncle, Abdikarim Osman Addow, a well-known artist.

“I would use charcoal on all the walls of the house, drawing my vision of the world,” Sana said, laughing. More formal instruction followed, and she eventually assembled a book from her sketches of household items like a shoe or a jug of water.

But as her work brought her more public attention over the years, some tensions followed.

“I fear for myself sometimes,” she said, and recalled a confrontation during a recent exhibition at the City University of Mogadishu. A male student began shouting “This is wrong!” and professors tried to calm him, explaining that art is an important part of the world.

Many people in Somalia don’t understand the arts, Sana said, and some even criticise them as disgusting. At exhibitions, she tries to make people understand that art is useful and “a weapon that can be used for many things.”

A teacher once challenged her skills by asking questions and requiring answers in the form of a drawing, she said.

“Everything that’s made is first drawn, and what we’re making is not the dress but something that changes your internal emotions,” Sana said. “Our paintings talk to the people.”

Her work at times explores the social issues roiling Somalia, including a painting of a soldier looking at the ruins of the country’s first parliament building. It reflects the current political clash between the federal government and opposition, she said, as national elections are delayed.

Another painting reflects abuses against vulnerable young women “which they cannot even express.” A third shows a woman in the bare-shouldered dress popular in Somalia decades ago before a stricter interpretation of Islam took hold and scholars urged women to wear the hijab.

But Sana also strives for beauty in her work, aware that “we have passed through 30 years of destruction, and the people only see bad things, having in their mind blood and destruction and explosions. … If you Google Somalia, we don’t have beautiful pictures there, but ugly ones, so I’d like to change all that using my paintings.”

Sana said she hopes to gain further confidence in her work by exhibiting it more widely, beyond events in Somalia and neighboring Kenya.

But finding role models at home for her profession doesn’t come easily.

Sana named several Somali artists whose work she admires, but she knows of no other female ones like herself.