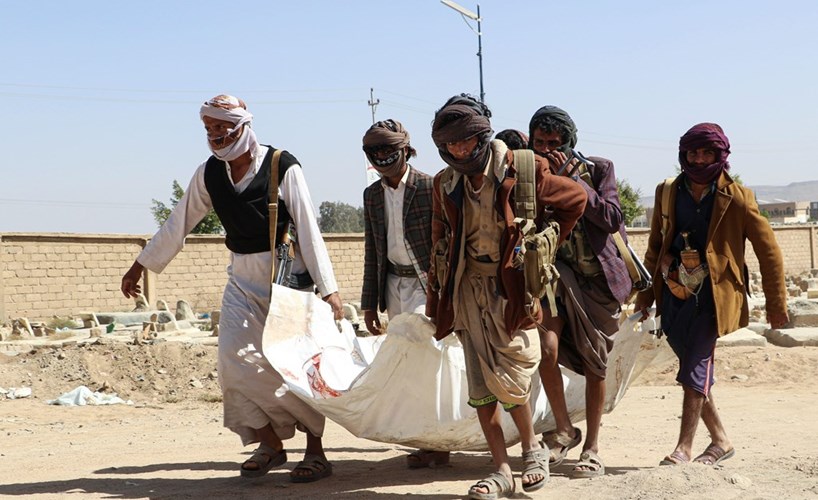 The body of a victim of Saudi bombing in the northern city of Saada, Yemen, is carried to be buried in a cemetery, last week

DIPLOMACY’s success record in resolving conflicts in the Middle East is nothing to shout about. But few failures, measured in terms of human suffering, economic collapse, and infrastructure destruction, have been more painfully evident than the failure in Yemen. Seven years on, this sprawling, unwieldy, and barely comprehensible war continues each day to degrade the country and take the lives of more and more of its civilian population.

Over the years, various international envoys have shuttled between the parties involved, but without producing the results that Yemenis yearn for.

A year ago, when President Biden entered the White House, there was reason for hope. Ending the war in Yemen, he said, was one of his administration’s top priorities (Comment, 19 February 2021). He appointed a special envoy, and said that the United States would no longer supply offensive weapons to Saudi Arabia, the leading state in the Arab coalition that began bombing Yemen in March 2015 to support the government and suppress the Houthi rebellion.

One year later, when asked about progress in Yemen, President Biden could find nothing more to say than “Ending the war takes the two parties to be involved to do it. And it’s going to be very difficult.”

The paucity of this statement is breathtaking. Surely the President knows that there are not just two parties involved, but at least five: Yemeni government forces, Houthi rebels, Saudis, Emiratis, and (indirectly) Iranians, not to mention a range of Yemeni groups pursuing their own domestic agendas, such as southern separatists. Then saying that finding a solution will be “very difficult” hardly displays new insight of the kind that the world was waiting for from a newly re-engaged US. Clearly, Yemen is no longer uppermost in President Biden’s mind as crises loom in Ukraine and Taiwan.

THIS realisation, taken in conjunction with a recent escalation in violence, means that new thinking on the part played by diplomacy is needed urgently. The United Arab Emirates’ re-engagement in the conflict, and the subsequent Houthi missile attacks on Abu Dhabi and Saudi bombing of Sanaa and the northern city of Saada, have led to the loss of hundreds more civilian lives. According to the United Nations Children’s Fund, UNICEF, the number of children killed in the first three weeks of January was more than double that for December.

These are dispiriting developments for those who have been hoping and praying for peace in Yemen. The Archdeacon in the Gulf, the Ven. Dr Bill Schwartz (News, 10 September 2021), says that “unfortunately, civilian casualties from armaments and especially economic disruption are increasing more and more. . . There are no indicators which give me hope for a ceasefire in any predictable timeframe.”

Diplomacy’s failure thus far was spelt out bluntly by the current UN envoy to Yemen, Hans Grundberg, when he reported to the Security Council that his efforts to explore ways to tackle the parties’ priorities and unlock a nationwide ceasefire had “met the same obstacles as past efforts. . . I’ll continue to explore options to fast-track de-escalation if and when the parties are ready.” Not much in the way of comfort for Yemeni civilians there.

After this wait in vain for the parties to be ready to open peace talks, the focus has to shift on to the humanitarian crisis. The International Crisis Group, in a recently published report, says that Yemen “needs an economic ceasefire as much as a military one”, and that the UN envoy “should launch a mediation track to identify the economic conflict’s key players and begin to lay the groundwork for an economic truce even while the shooting continues”.

Such an initiative would need the backing not just of the UN as a body, but of the whole international community. Nations would need to put aside their own interests in Yemen and encourage the various participants in the war to do the same. As Dr Schwartz says: “One can only hope that the world powers will take responsibility and find the will to force all sides of the conflict to consider the people, rather than their particular political ambitions. And hope, as always, that praying people will intercede on behalf of the people of Yemen.”

THE latest rise in the level of violence has drawn predictable international denunciation. The US Secretary of State, Antony Blinken, wrote on Twitter that the current attacks across Yemen “must come to an end. We urge all parties to commit to a peaceful, diplomatic solution to ending the conflict.”

Such statements are now no more than diplomatic white noise. New initiatives are needed. While it is true that the great powers have other crises to focus on, allowing another year to go by without concerted efforts to address Yemen’s humanitarian needs, as a first step towards peace, will leave a dark stain on the conscience of the international community. It is a conflict, let us not forget, in which, thus far, at least 10,000 children have been killed or injured.

Gerald Butt, a former Middle East Correspondent of the BBC and the Church Times, is Middle East Adviser to Oxford Analytica, a geopolitical analyst and advisory firm.