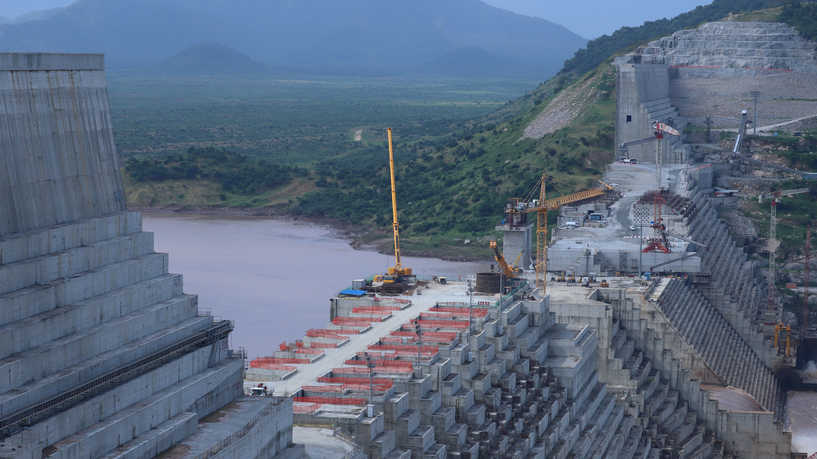 FILE PHOTO: Ethiopia’s Grand Renaissance Dam is seen as it undergoes construction work on the river Nile in Ethiopia Sept. 26, 2019.

ADDIS ABABA, ETHIOPIA – Ethiopia will skip the latest round of U.S.-brokered talks this week on a disputed Nile dam project with Egypt and Sudan, the country’s water ministry announced Wednesday.

A final deal on the massive Great Ethiopian Renaissance Dam had been expected this month, but U.S. Secretary of State Mike Pompeo said in his Ethiopia visit last week that an agreement now might take months as “a great deal of work remains.”

The dispute over what will be Africa’s largest hydroelectric dam pits Ethiopia’s desire to pull millions out of poverty against Egypt’s concerns over a critical water supply.

Ethiopia will skip the talks in Washington on Thursday and Friday “because the country’s delegation hasn’t concluded its consultation with relevant stakeholders,” the ministry of water, irrigation and energy said on its Facebook page. “The decision has been communicated with the U.S. Treasury secretary.”

The announcement came amid widespread concerns in Ethiopia that its delegation has been pressured by the U.S. to reach a deal on $4.6 billion dam that is nearing completion. The U.S. became involved in the talks after Egypt’s invitation.

“Ethiopia will never sign on an agreement that will surrender its right to use the Nile River,” the Ethiopian ambassador to the U.S., Fitsum Arega, said on Twitter.

Responding to Ethiopia’s decision to sit out this week’s meeting, Egypt’s foreign ministry spokesman, Ahmed Hafez, asserted that Egypt remained “committed to the negotiation track … according to what was agreed upon by the three countries.” He said the Egyptian irrigation minister would attend the talks.

Egypt Blames Ethiopia for Latest Failure of Nile Dam Talks
The Blue Nile flows from Ethiopia into Sudan where it joins the White Nile near the capital, Khartoum, to form the Nile River

Egypt wants the dam to be filled more slowly to reduce restrictions on the flow of the Nile.

Ethiopia says the dam is needed to provide electricity for development. In January it announced that it will start filling the dam, now more than 70% complete, in July at the start of the rainy season.

“There was lots of discomfort recently due to the behavior and changing role of the U.S. among policy makers in Ethiopia,” political analyst Abel Abate Demissie told The Associated Press.

After two days of discussions facilitated by the U.S. Treasury Department, the three countries say they hope to reach a technical agreement by the end of the month
Via VOA
previous post